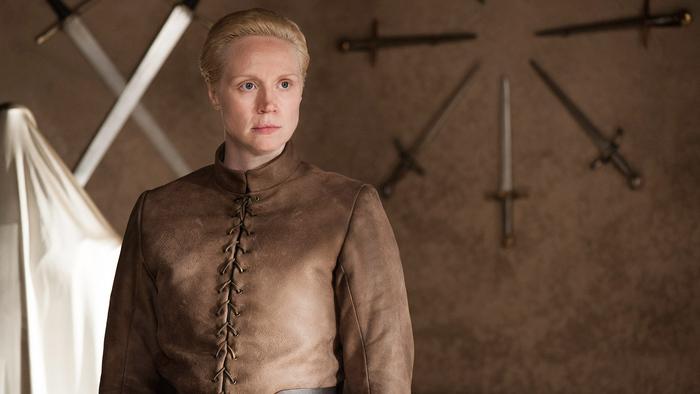 As we rev up for the Game of Thrones red carpet premiere this weekend, there’s only seventeen days remaining until the April 24th debut of season 6! For today’s Memory Lane, recalling the shocking “Oathkeeper,” we’re welcoming back our surveymaster and Dark Wings, Dark Words recapper, James Rivers!  -Sue the Fury

This sublime episode is bookended by two scenes not in the books – one that largely seemed to annoy Sullied viewers (mainly because the characters involved are more background-y in the books) and one that amazed and/or flummoxed them. 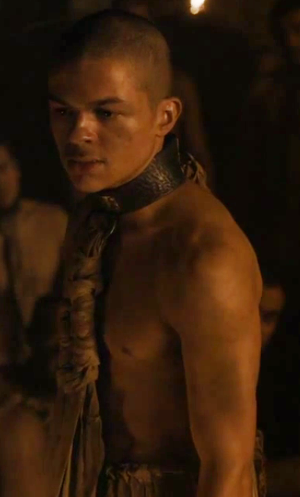 Grey Worm and Missandei open the episode as she tries to teach him the common tongue. As they slowly converse, Grey Worm says he has no memory of his Sullied days. Daenerys and Ser Barristan interrupt, and say it is time to invade Meereen. (I, too, practice my second-language skills while killing time before battle).

Under cover of night, the Unsullied army invades Meereen via its sewers and offers weapons to its slaves, who are debating whether to rebel. We’re introduced to Mossador, who will appear again in Season 5.

A master walks the streets of Meereen and is horrified to discover “Kill the Masters” written on a wall. We viewers are more confused than horrified, since this is written in the common tongue, even as he speaks in High Valyrian — just like the slaves in the scene before him. Maybe Grey Worm wrote it out to impress Missandei? 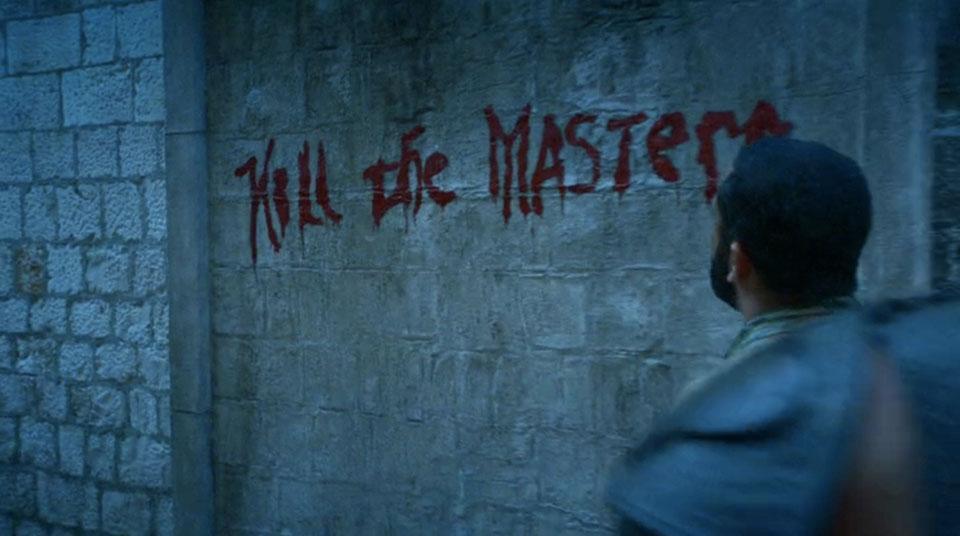 Wait, no, it’s not. Sometimes it’s best to answer injustice with mercy, advises Barristan as his boss ponders the fate of the masters. But Dany ain’t having any of that. And so 163 masters are nailed to posts, just as some of them had done to the same number of Meereenese slave children.

On the shores of King’s Landing, Bronn and one-handed Jaime practice sword-fighting. At one point, Bronn yanks off Jaime’s golden hand and uses it against him: “That was me knocking your ass to the dirt with your own hand.” This is clearly the beginning of a beautiful relationship.

Bronn brings up Tyrion, and remembers how he initially named Jaime as his champion at the Eyrie, the last time he was imprisoned and facing trial for killing/conspiring to kill a child. This persuades Jaime to visit Tyrion in jail.

Tyrion denies killing Joffrey; it briefly gets awkward when the whole incest thing comes up, and Jaime insists he can’t free Tyrion because doing so is treason.

They realize that Cersei wants Tyrion dead no matter what, and the missing Sansa too. Could she be involved?

“Sansa’s not a killer,” Tyrion says. “Not yet anyway.”

Sansa and Littlefinger palaver in the hold of a ship. She muses over whether Littlefienger killed Joffrey and who helped him. Ser Dontos? No, too drunk for Pete to trust. Tyrion? Hmm, no. Smirking ever so slightly, Littlefinger tells Sansa she was unknowningly involved: “Do you remember that lovely necklace Dontos gave you? I don’t suppose you noticed a stone was missing after the feast.” (Note that in books, Sansa figures out the method of poison herself.) 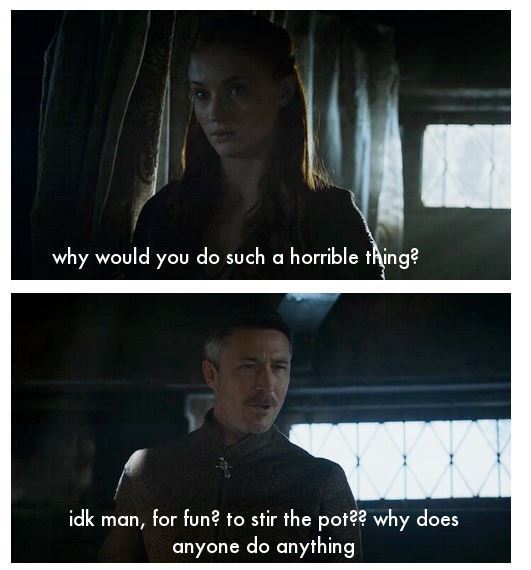 And who helped Littlefinger? Why, one of Littlefinger’s “new friends.” And we cut suspiciously to Margaery and Olenna strolling yet again through the gardens. Olenna plans to get out of town before Tyrion’s trial. She advises Margaery to get her paws on Tommen while Cersei is distracted, “mourning her dear departed boy. Accusing her brother of his murder, which he didn’t commit.” 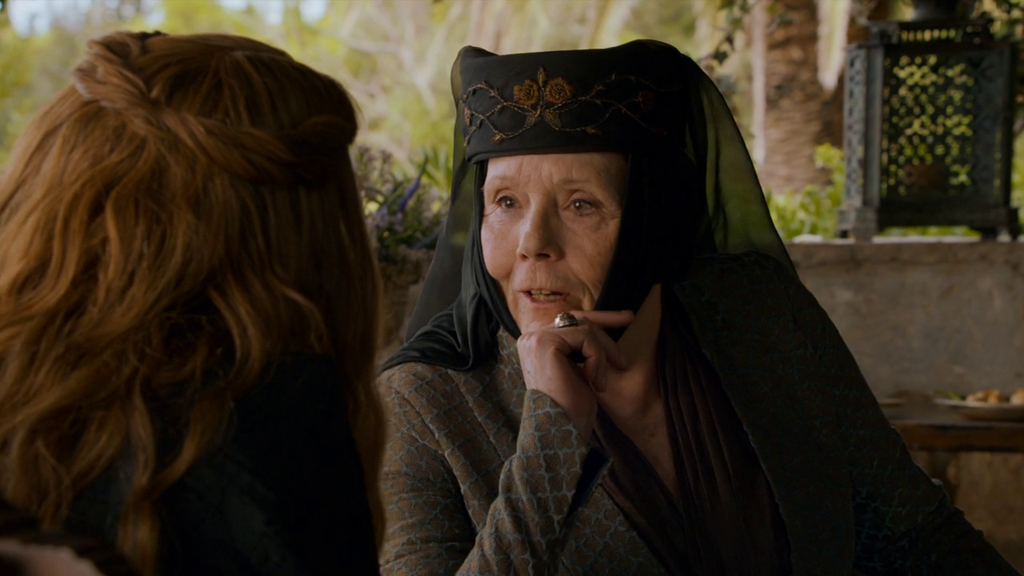 “But I do know,” granny tells her, and adds: “You don’t think I’d let you marry that beast, do you?” Margaery is all confuzzled, but Olenna helpfully uses her granddaughter’s hair and necklace to mimic how she lifted the poison from Sansa’s necklace.

At the Wall, Jon trains Night’s Watch members on how to disarm Wildlings. Locke, sent by Roose Bolton to find Bran, impresses Jon a bit. Allister Thorne, acting Lord Commander, shows up and berates and threatens Jon; Slynt suggests Thorne let Jon go off to Craster’s Keep and let the mutineers take care of him.

Back in King’s Landing, a drunken Cersei confronts Jaime without mention of last episode’s controversial encounter. “Why did Catelyn Stark set you free?” Cersei asks if Jaime would bring her Sansa’s head if she asked. He does not answer, but insists Tyrion is innocent. 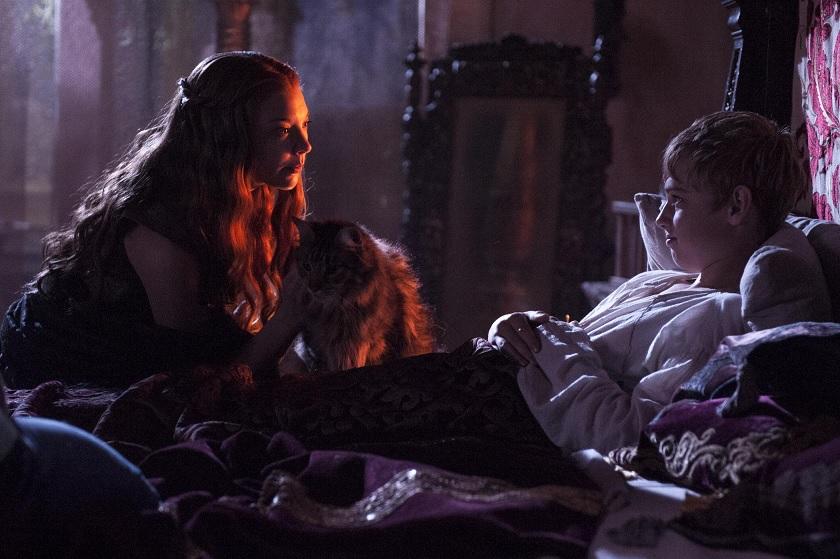 Cersei has ordered four men to stand at Tommen’s door, but it doesn’t stop Margaery! She arrives in his bedroom and works her charms on him to great apparent affect, telling him that when they are wed, she will be his forever. Also working the charms: Ser Pounce, whose appearance thrills book fans everywhere. She kisses Tommen’s forehead goodnight.

In the Kingsguard’s tower room, Brienne reads from the White Book. Jaime gives her his new Valyrian steel sword and explains its origins. He tasks her with finding Sansa and getting her someplace safe. “I’ll find her, for Lady Catelyn, and for you,” Brienne says. Jaime has armor for her too. And he adds, “I almost forgot, I have one more gift.”

Then smash cut to a grinning Podrick.

Brienne is nonplussed by her new posse member. “I don’t need a squire.”

Podrick reassures her: “I won’t slow you down, ser…..m’lady.”

Brienne names the sword Oathkeeper. She and Jaime share several long looks as she and Pod depart to wander, searching for a girl with lovely red hair.

Up at the Wall, Jon and Sam wonder how far north Bran might have gotten. Could he be as far as Craster’s? Locke overhears them, which leads to him volunteering to join Jon and others on the mission to kill the mutineers before they can tell the Wildlings how few men are at the Wall and how to pierce its defenses. Got all that? 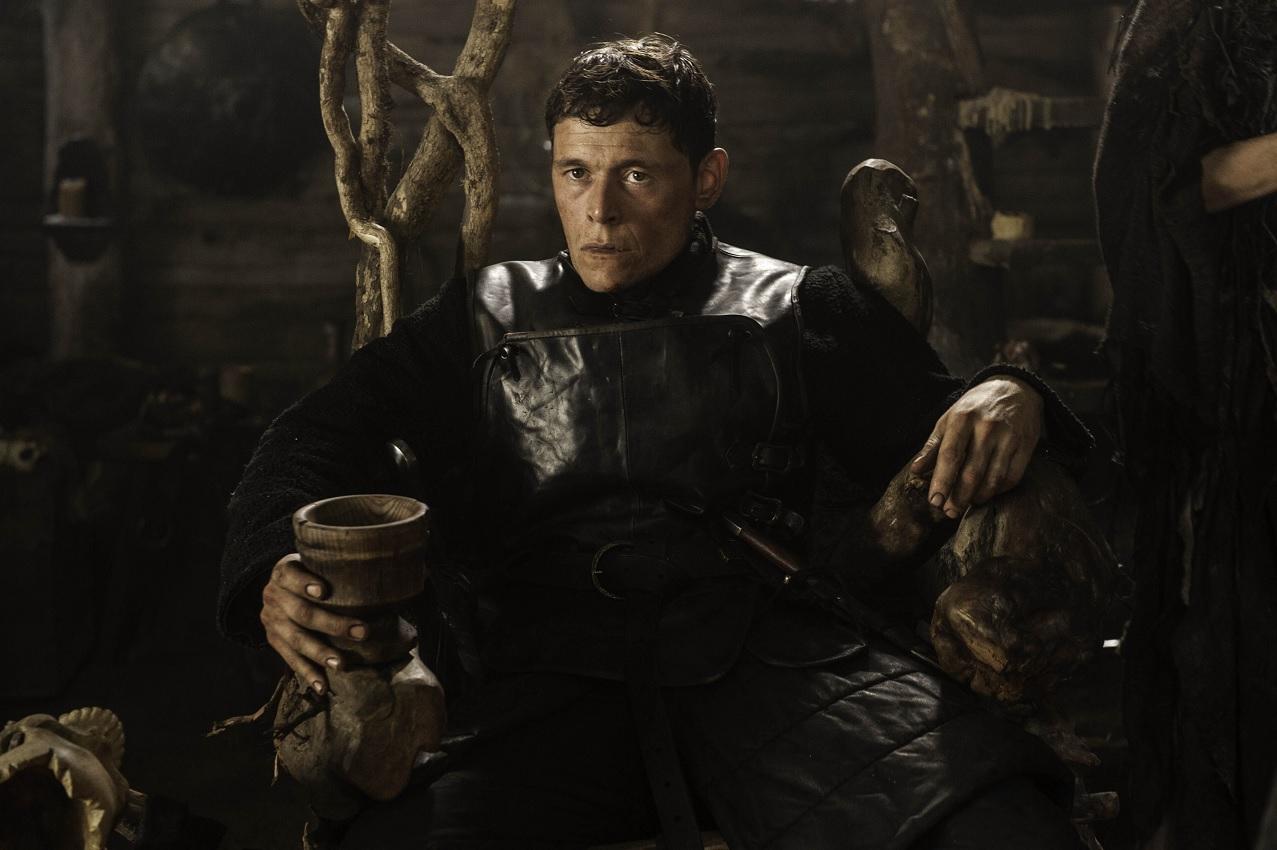 At Craster’s, lead mutineer Tanner narrates for us: “Karl Tanner, from Gin Alley, drinking wine from the skull of Jeor Fookin’ Mormont.”

Highly uncomfortable sexual assault imagery follows as other mutineers have their way with Craster’s wives/daughters. This is interrupted when the women begin chanting “a gift to the gods” as Craster’s last child is brought in and one of Craster’s wives explains the whole “the White Walkers take the babies and leave us alone” deal. Tanner gets Rast to leave the newborn in the snow. It is displeased and wails.

Nearby, Bran hears the baby crying. He wargs to investigate. In Summer, he comes upon Ghost instead, then falls into a trap. Also, Jojen is all sweaty and gross. The next morning the group watches the activity at Craster’s from afar, and naturally is caught. A chained-up, “Hodor”-ing Hodor is taunted. Bran, Meera and Jojen are questioned by Karl Fookin’ Tanner and comrades. Bran only starts talking when Tanner threatens to assault Meera, and Jojen has a seizure. Bran confesses his identity. Tanner is fookin’ elated.

And then: A figure on a horse in a snowstorm. Ooh oooh! Is it that character from the books we haven’t seen yet??? No, it’s a creepy White Walker on a dead horse. Hmm. 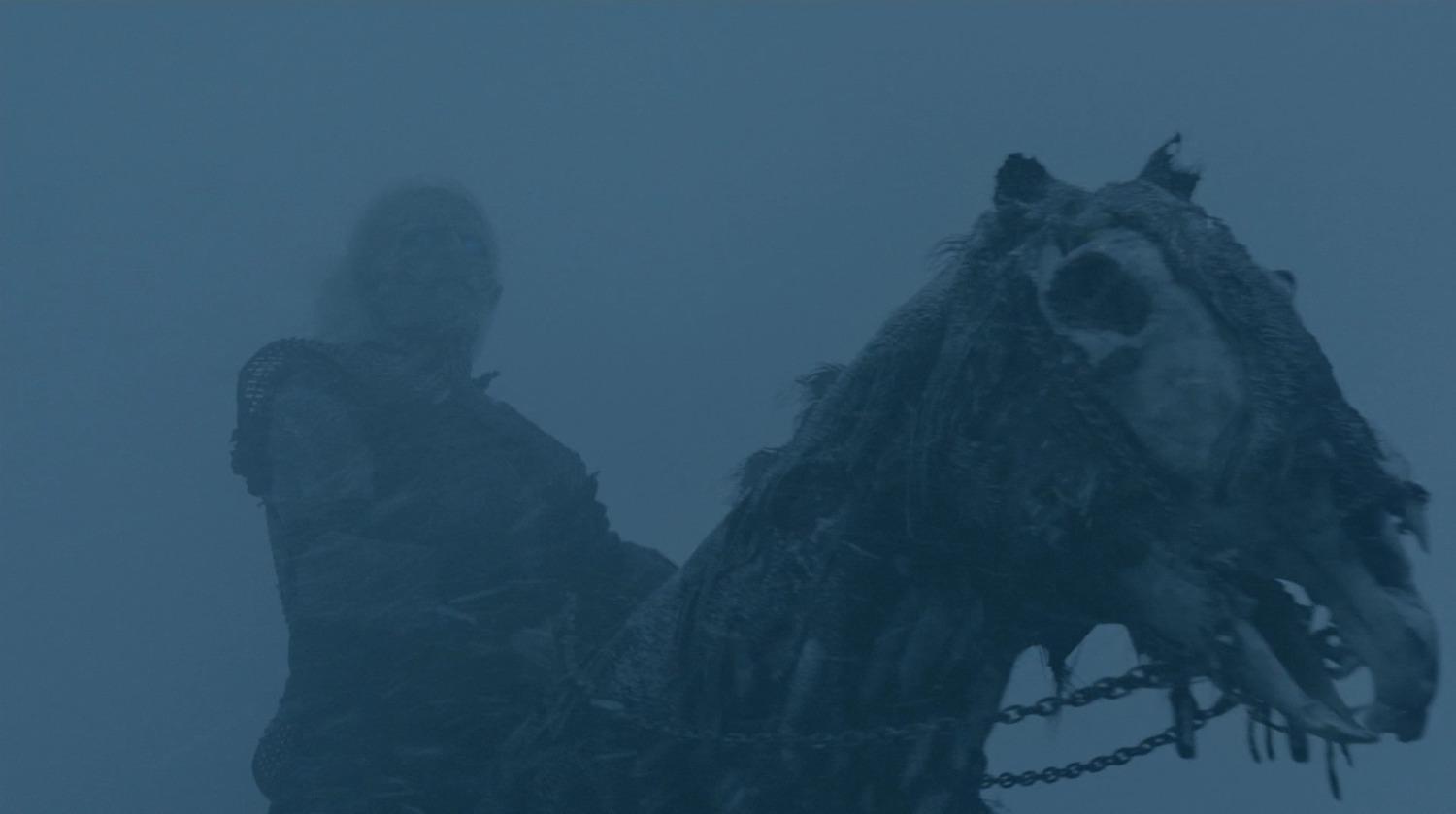 It has Craster’s baby. What is this? This isn’t in the books. The three head to…uh…where is this? 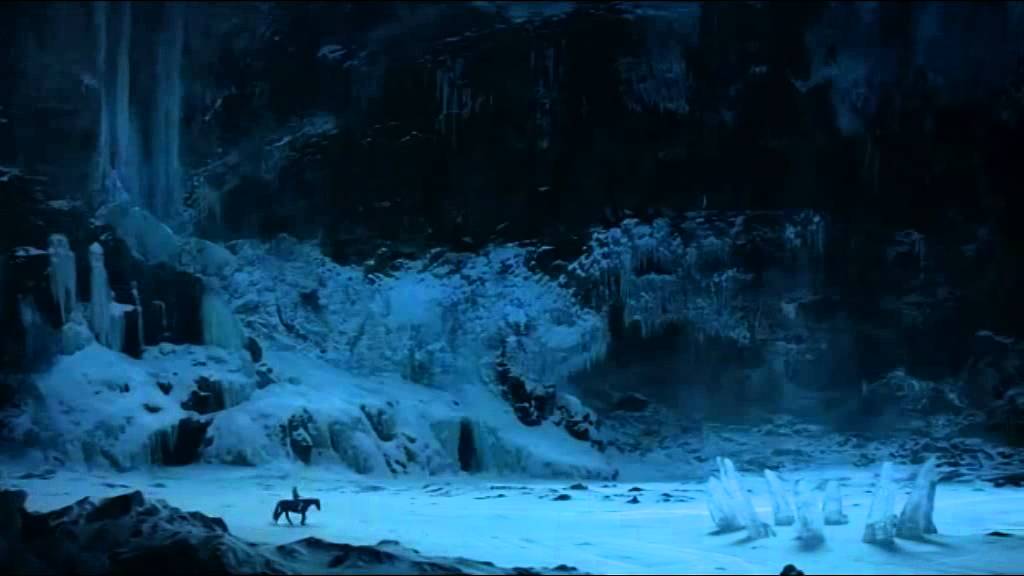 It’s an icy Stonehenge. What is going on here? 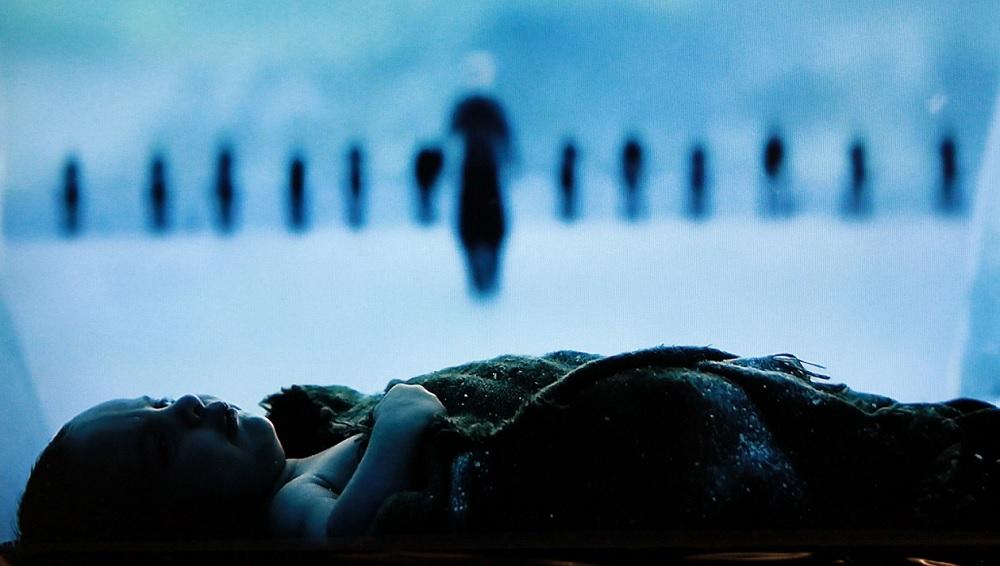 The Walker places the baby on an altar and another figure comes forward from a group of 13. Um guys, are you seeing this right now? 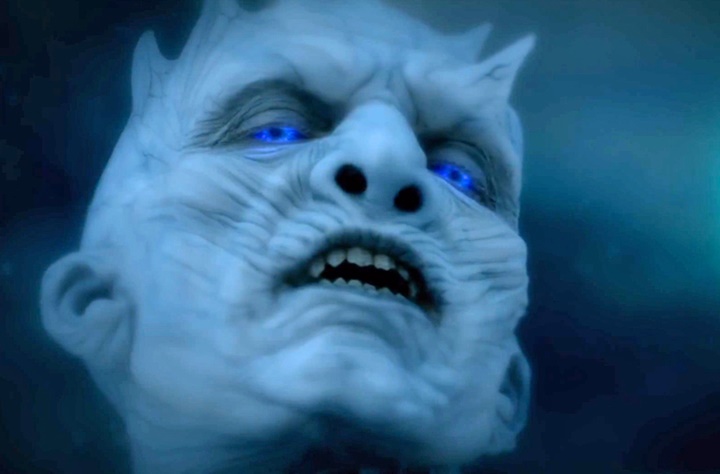 The baby cries and cries and up walks a White Walker who is either having a very bad frozen-hair day or is their leader. Uh uhh ummm we are totally going off-book here and I don’t know how to react to this information. 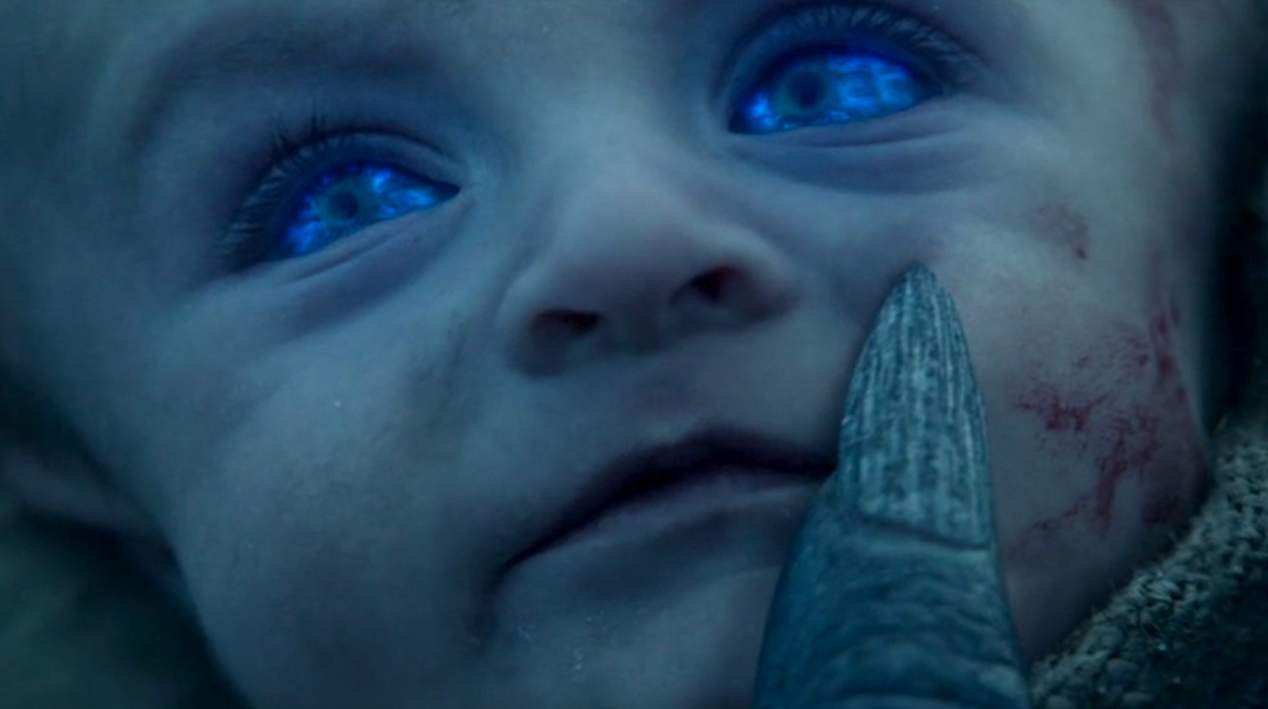 Well, that was something.

“Oathkeeper” seemed to have something for everyone.

Love “streamlining” via adaptation? There was an adept adaptation of “Brienne runs into Pod on the road” in the books into “Jaime and Tyrion deliberately put them together” on the show.

Love “expanding book characters” via adaptation? There was the opening scene that continued to explore Missandei, Grey Worm and the bond between them (which grew even more in Season 5, and perhaps will further this season).

Love “inventing plots for major book characters”? There was Bran’s capture at Craster’s Keep and Jon’s impending departure to there.

Love “possibly spoiling things implied but not explicitly revealed in the books”? There was Olenna and Margaery’s conversation and the explanation of why the White Walkers want those babies.

Love “making both Sullied and Unsullied say WTF”? There was the reveal of the White Walker “temple” and the dramatic introduction of the Night’s King.

All this and more. And of course, there are those who loved each of the above and those who decidedly did not. But in either case it made for a memorable episode that furthered multiple plots.

“A single day of freedom is worth more than a lifetime in chains.” – Grey Worm

“Sansa’s not a killer, not yet anyway.” – Tyrion

“If I have to take one more leisurely stroll through these gardens, I’ll fling myself from the cliffs.” – Lady Olenna 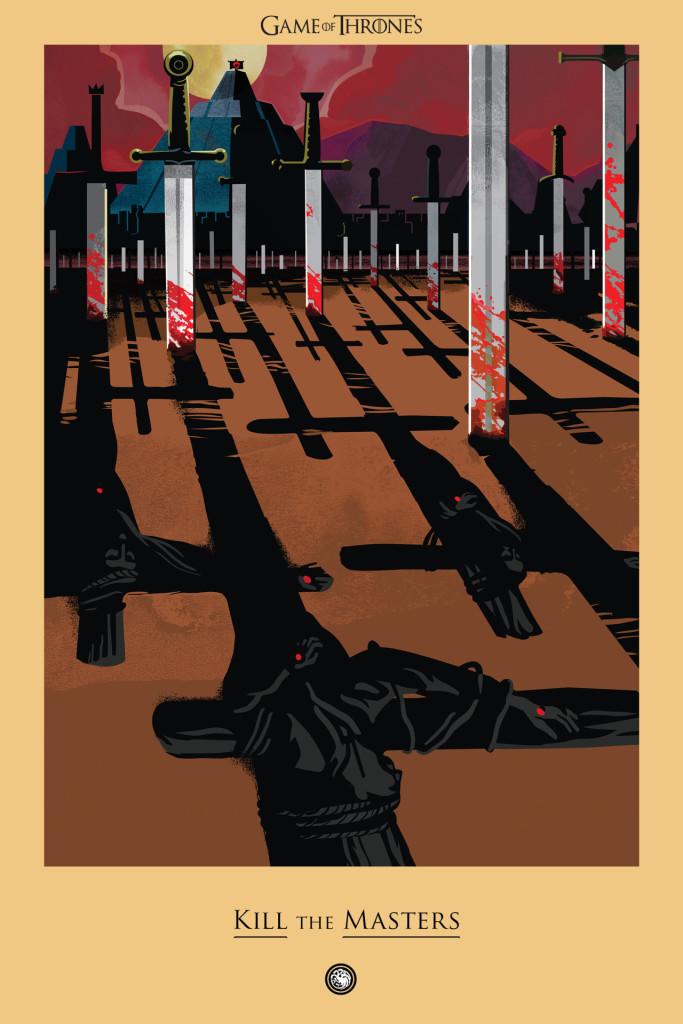