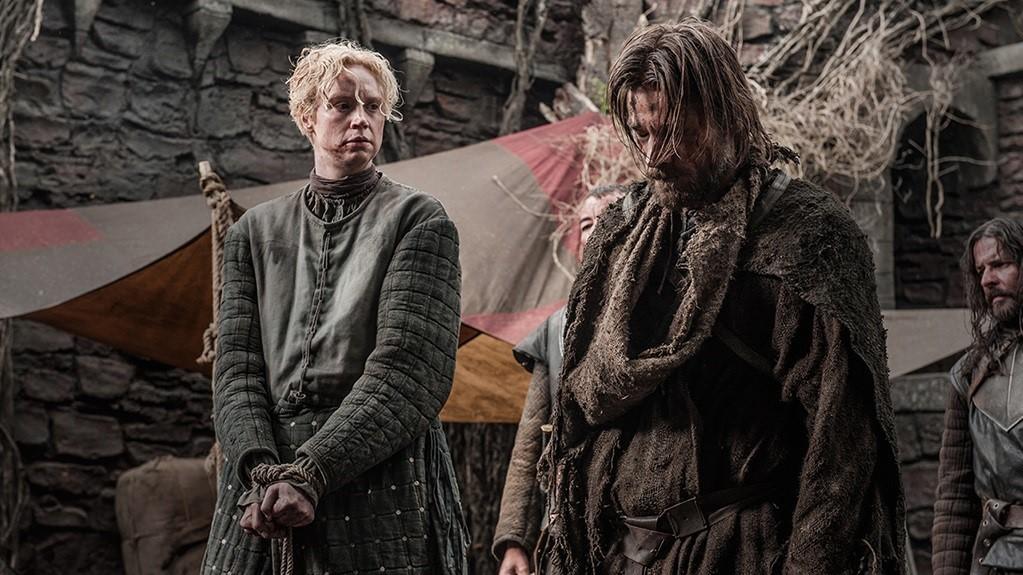 Today in our rewatch countdown leading up to Game of Thrones season 6, we’ll be taking a closer look at “Kissed by Fire,” the classic season 3 episode written by Bryan Cogman and directed by Alex Graves. Please welcome Tuesday’s guest writer (and last week’s intrepid trailer screencapper), Manu!  -Sue the Fury

“By what right does the wolf judge the lion? BY WHAT RIGHT?”

“Kissed by Fire,” the fifth installment of season three, had the unenviable task of following “And Now His Watch Is Ended,” one of the stronger episodes in the series run (punctuated powerfully with Daenerys’s sack of Astapor). It may be fitting that the previous Game of Thrones episode ended in fire, as the flames offer a powerful motif for its successor.

Fire in Westeros and Essos is viewed as both cleansing and transformative (by the will of R’hllor), and whether it be literal or figurative, this episode shows how “fire” has shaped the characters and narratives in Game of Thrones. 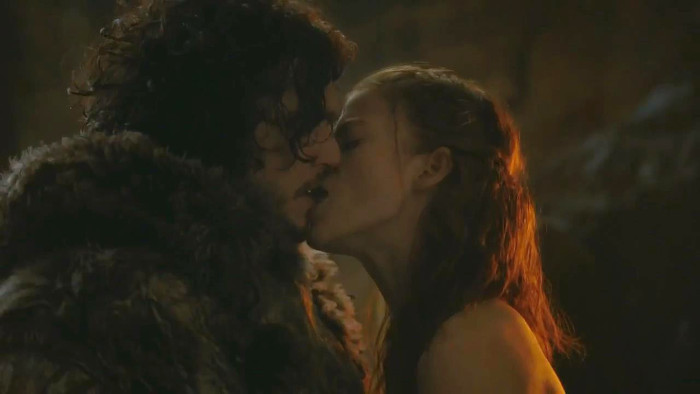 The phrase “kissed by fire” is an old wildling adage referring to red hair, as Ygritte explains to a freshly deflowered Jon Snow. Red hair in their society is a sign of luck, but Jon and Ygritte’s cave tryst is about more than just getting lucky (insert Stannis groan). Jon has vows to break, per Ygritte, and she demands Jon’s maidenhood in the Cave Spa Beyond the Wall™.

Despite murdering Qhorin Halfhand to infiltrate Mance Rayder’s army, Jon’s fealty to the Free Folk is still in question. Orell gives Jon a mild interrogation on the state of the Watch, not betraying the fact that he has seen the manned castles and the numbers of the Night’s Watchmen through the eyes of his eagle. Tormund, on the other hand, enjoys the young crow turncloak, but warns Jon that any hint of duplicity will end with his death.

Ygritte, understanding that Jon is conflicted, steals Longclaw and leads him into a cavern for seductive ends. Jon is a man struggling with his vows and his own natural urges; his father taught him a life of honor, and what Ygritte proposes would defile that honor in one swift stroke. Jon gives in, and while Ygritte knows Jon’s loyalty to the Watch still exists, he has at the very least committed himself to her.

Given where we are at the end of Season 5 (ignoring Jon’s “demise”), we see the start of Jon’s growth into who he would later become; a capable soldier and tactician, and eventually Lord Commander of the Night’s Watch. While Maester Aemon only recently instructed Jon to “kill the boy,” it was here that Jon’s transformation began. 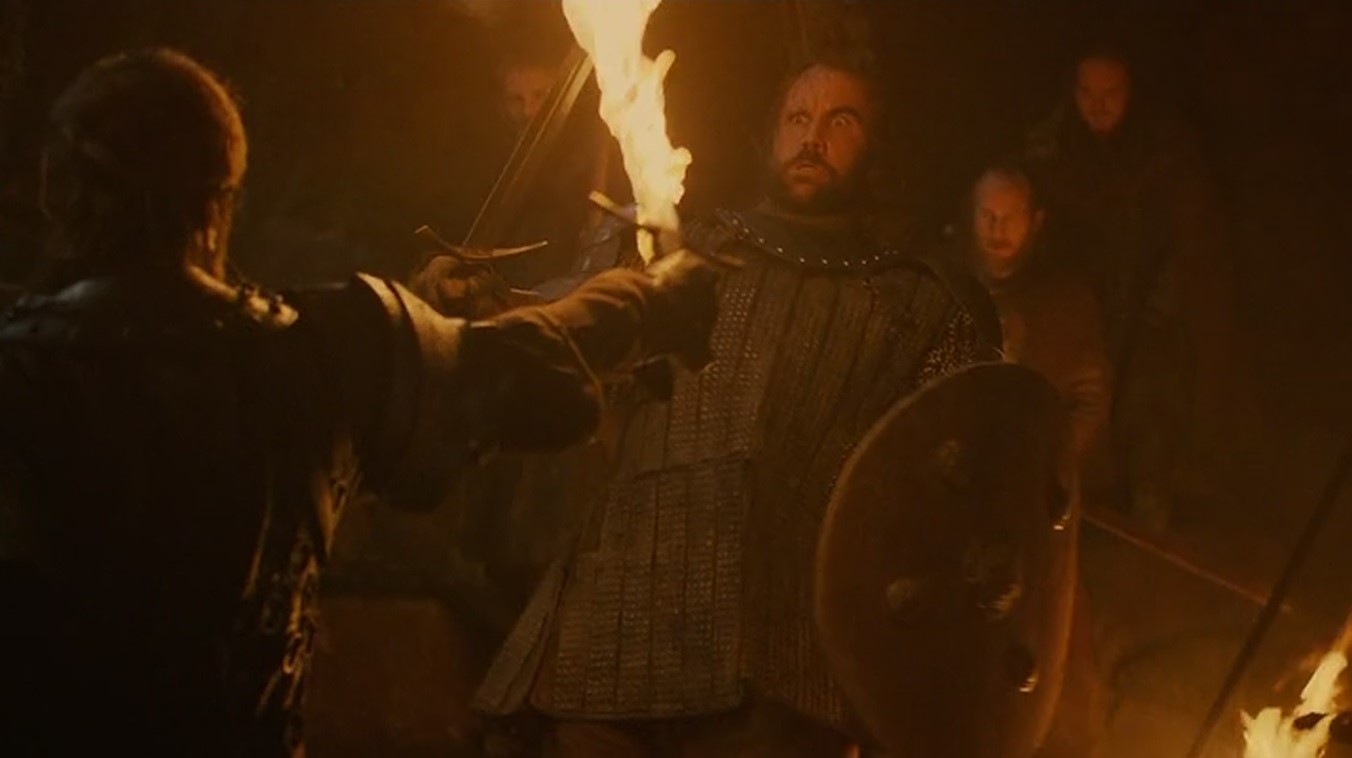 Jon’s trial by fire was a figurative one; unfortunately for Sandor Clegane, his was far more literal. After Arya had laid the death of the butcher’s boy at the Hound’s feet, the Brotherhood without Banners sentenced him to trial by combat against Beric Dondarrion. When Beric lights his sword aflame, Arya takes notice of the fear in the Hound’s eyes; fire, it seems, scares one of the more terrifying, brutal men in her life.

The trial itself is one of the most impressive setpieces the show has put together, as Beric and Clegane’s steel sing in the storm of swords underneath the Hollow Hill (the cave set here is the same used for Ygritte and Jon’s cavern scene). Especially impressive is the lighting and choreography; the former relies mostly on the flaming sword and various fires around the cave, and the latter is emphasized by the close quarters in which the fight takes place.

In the end, Sandor Clegane lands a fatal blow, slashing down through the Lightning Lord’s neckbone and apparently ending his life. However, a few words from Thoros the Red Priest and life is blown back into Beric’s corpse, much to Arya and the Hound’s bewilderment.

Sandor Clegane’s transformation by fire happened long ago, but is still worth examining. When his older brother Gregor shoved his face into the burning coals, what peace and naiveté remained in the younger Clegane turned to ash. Dreams of knighthood and honor died that day, and Sandor’s transformation into the Hound began.

Here, however, there’s a slightly different transformation occurring; that of how the audience perceives Sandor Clegane. While far more complicated than a villain, the Hound’s association with Joffrey and the Lannister clan had often put him at odds with several protagonists. Now, the audience has come to see man, while harsh and unforgiving, who has real motivations and fears, and would later become protector for the younger she-wolf, not unlike he did for Sansa the season prior. The second episode of the series ends with the Hound’s murder of a child; two seasons later, we find ourselves holding this dog in a more empathetic light… 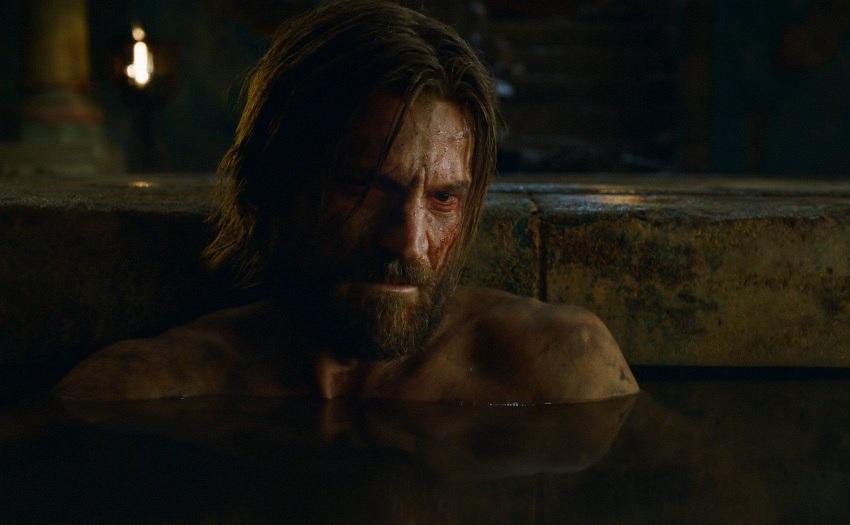 …which brings us to the Kingslayer, Jaime Lannister. His story echoes that of the Hound; a story of fire and family long ago shaped him into the man he is today, but in this pivotal third season, the cloak this man has shrouded himself in is slowly unraveled. 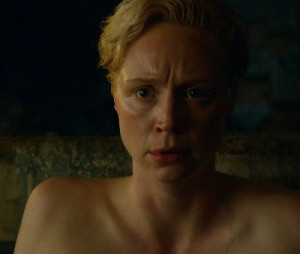 Jaime disrobes both literally and metaphorically in front of Brienne, Maid of Tarth, revealing the genesis of his undesirable moniker. When the audience first hears of the “Kingslayer” sobriquet, even with the knowledge of Aerys’s madness, very little doubt is benefited the son of Tywin Lannister. It’s presupposed that Jaime acted out of self-interest and pragmatism; that after the death of Rhaegar at the Ruby Ford and Lord Tywin’s sack of King’s Landing, Jaime took stock of which way the winds were blowing and made a calculated assessment to kill the king. This assumption is further buoyed by several other characters whom we trust (to varying degrees) derisively referring to him as “Kingslayer” (Robb, Catelyn, Barristan, Brienne, Stannis, just to name a few).

In the bathhouse of Harrenhal, Jaime divulges the truth to Brienne about that day of reckoning*. Jaime had urged the Mad King to first shut the gates to his lord father, and then later, after Lannister forces had taken the city, Jaime had urged surrender. Instead, Aerys, ordered Jaime to bring him his father’s head, before informing his pyromancer-Hand to engulf the entire city, and all those who reside therein, in wildfire. It’s here, when Jaime is asked to execute his father and stand witness to wholesale massacre, that the Kingslayer was born; not a pragmatic choice to join the winning side, but a necessary act to stave off a mass execution. 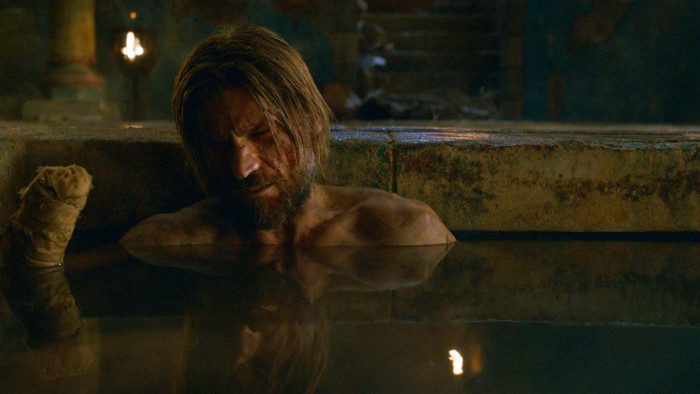 Right before Jaime launches into his monologue, he takes a glance at his maimed hand before turning to Brienne. A nice touch that has Jaime examine what he has just lost, before divulging the story of how he lost his identity.

The honor-bound Eddard Stark was the first to find Jaime afterwards, and as Jaime noted, was judged instantly for his crime. “By what right does the wolf judge the lion?” he says, before collapsing into Brienne’s arms. She calls the guards to help the Kingslayer, to which he responds, “Jaime…my name’s Jaime. This bit of dialogue is internalized in A Storm of Swords, so it’s a nice touch to have them spoken aloud here. In this moment, revealing the truth about the Kingslayer story, Jaime is transformed and reborn again, reclaiming the name Ser Jaime Lannister as his own.

And it here we find Jaime’s arc to be an encapsulation of Game of Thrones/A Song of Ice and Fire writ large. The narrative has always been about subverting genre tropes; from Ned Stark’s beheading to the Red Wedding to the focus on sexual violence, economic destabilization, and petty politics, Thrones has always been at its most poignant when it undermines the fabric upon which high fantasy stories are based on. There are no knights in shining armor, no great heroes slaying dragons; it is just men and women, and all the fallibility and complexity that comes with that.

When we meet Jaime Lannister in the pilot, he has all the trappings of a traditional medieval hero. Decked in golden armor, full of easy smiles, and the best swordsman in all the country, Jaime Lannister would be the traditional protagonist of a lesser epic. Instead, GRRM subverts this expectation and we find out Jaime is not only bedding his twin sister, but also father to the monstrous crown prince Joffrey. To further denigrate Jaime in our minds, the character defenestrates Bran Stark in the series premiere, sticks a dagger through Jory Cassel’s eye, and escalates the Stark-Lannister feud by attacking Ned Stark (the clear protagonist at this point in the story) in the streets of the capital. 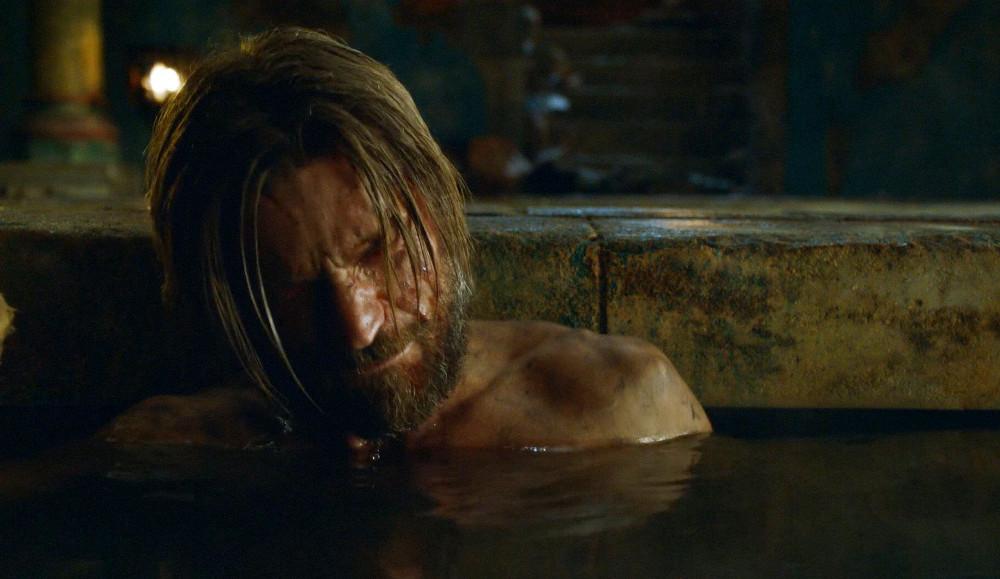 Fast forward three seasons, and the viewer has the epiphany that maybe Jaime is closer to that hero ideal than we had thought. Yes, he has committed many acts of violence, but his prevention of the burning of King’s Landing may altogether be the most noble act in recorded Westeros. His defense of Brienne, both from Locke earlier and later from a bear, speaks further to the truth that the Kingslayer is a man of honor, albeit in his own, twisted way.

Another wrinkle is added to the character knowing that Jaime has never once felt the need to explain himself to anyone; be it Ned Stark on that day 17 years ago, or King Robert in season one, or even to Cersei. A few simple words to any of them could have explained away his oathbreaking, but instead he kept the truth to himself. This concealment does not make Jaime noble or honorable in any meaningful way, but further informs us of the pride with which the son of Casterly Rock comports himself with.

“Kissed by Fire” marks the halfway point of season three, and in itself a turning point for the narrative as a whole. As the drum beats on towards the Red Wedding, we start to see characters familiar to us transform before our very eyes; boys become men, villains become heroes, and our understanding of morality in Westeros both deepens and obfuscates. The audience now grapples with how they’ve judged the characters, both wolf and lion, thus far. In the process, the viewing audience is treated to an altogether fabulous episode of Game of Thrones; one of the very best to date, in fact. 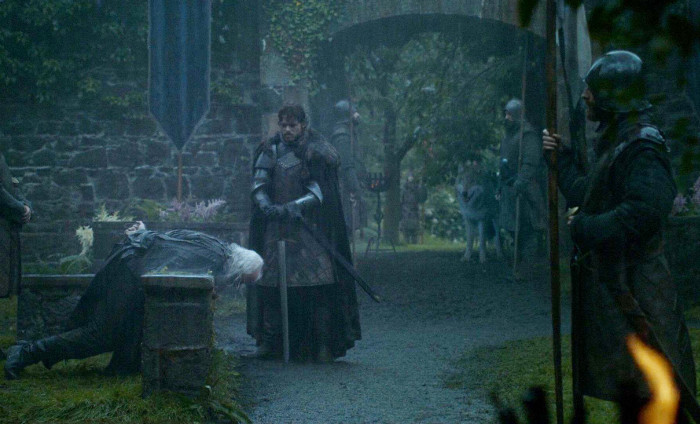 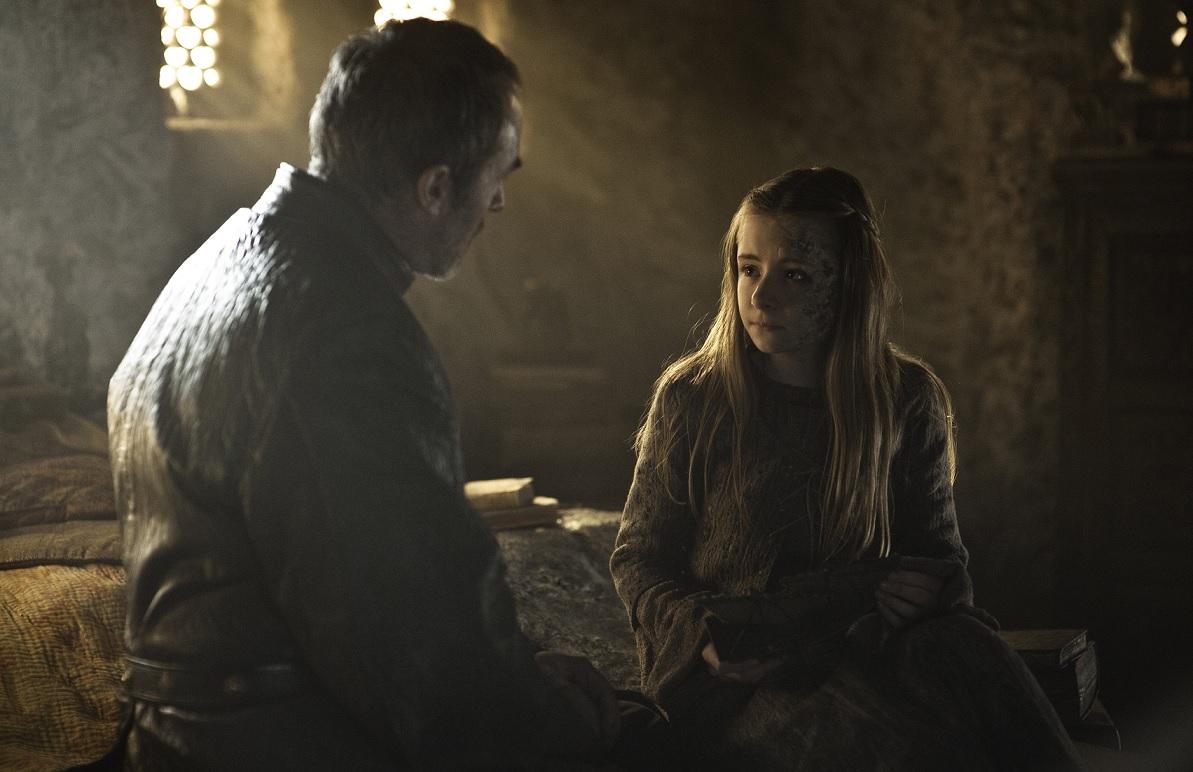 Introductions: Grey Worm, leader of the Unsullied army; Olyvar is the newest sex-working pawn of Littlefinger; and we get to see Selyse’s collection of male babies in jars. We meet Princess Shireen Baratheon, and Tara Fitzgerald steps into the part of Queen Selyse Baratheon, who previously only appeared as an unnamed and uncredited featured extra. 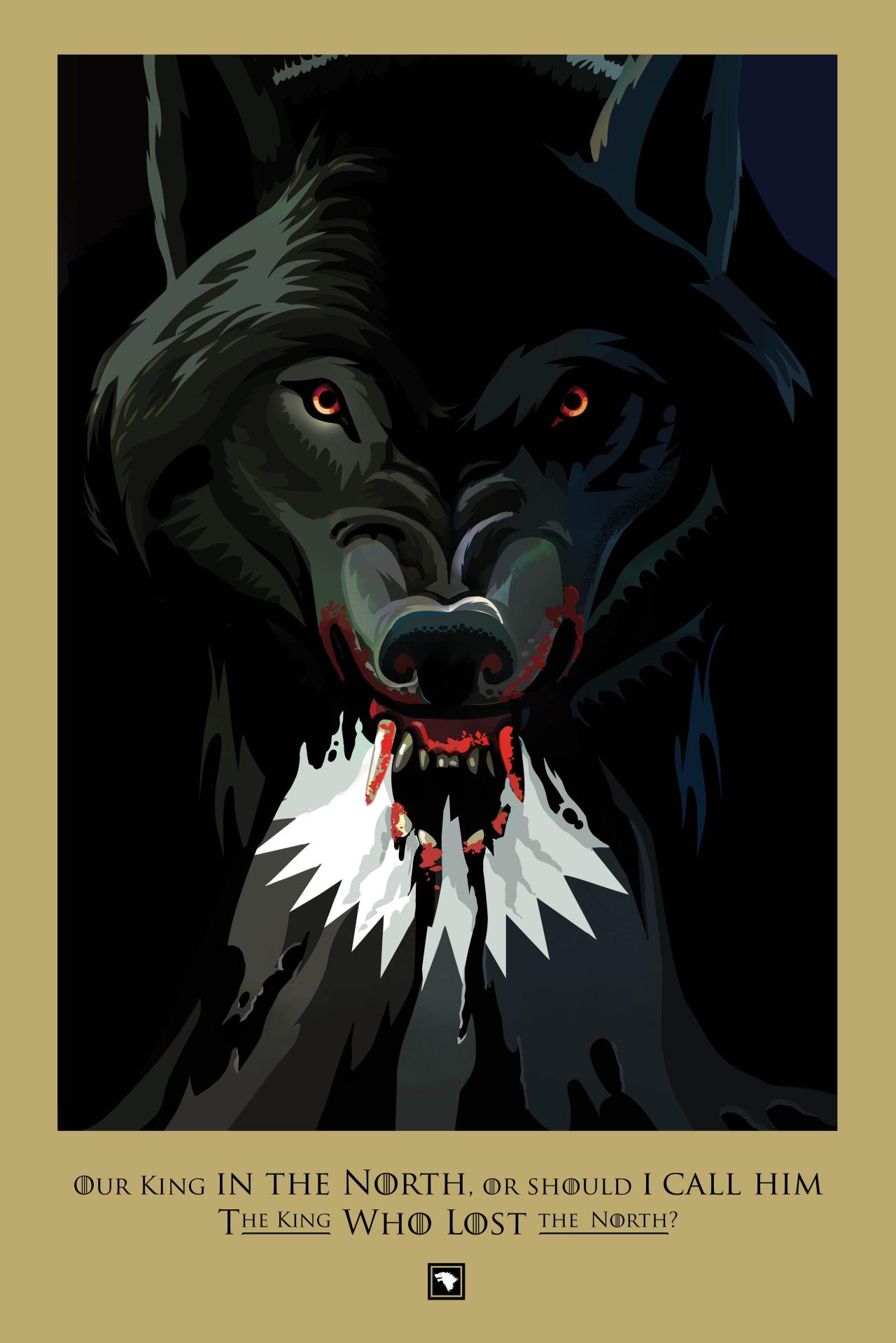