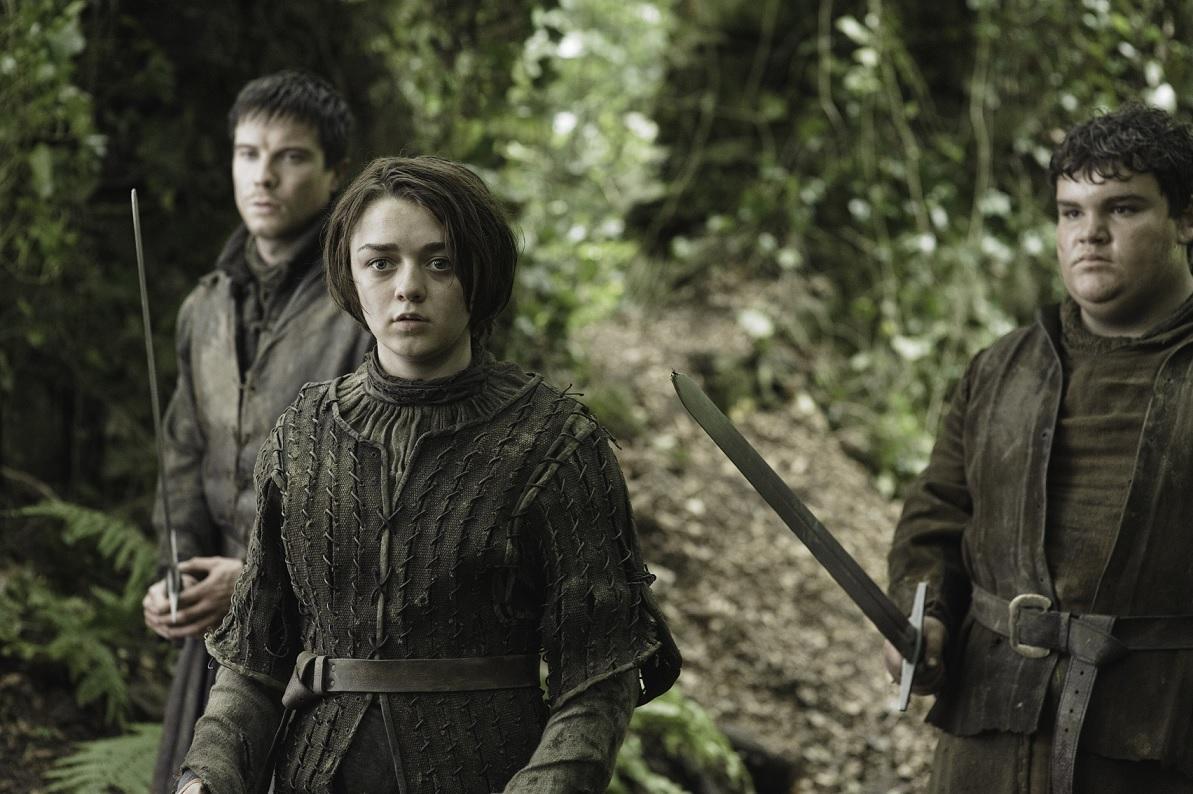 Today, a guest writer will walk us through “Dark Wings, Dark Words” in our #GoT50 countdown. Please welcome WotW reader, commenter and annual surveymaster James Rivers! -Sue the Fury

“Dark Wings, Dark Words” is one of the lowest-rated Game of Thrones episodes on IMDb. But frankly it stands up pretty well; perhaps there are no major events — and no on-screen deaths — but we are introduced to a surprising number of new characters who matter down the road. It has a good amount of foreshadowing for discerning book readers, as well as dialogue that, in the light of the forthcoming season 6, is suddenly important to remember.

We open on Bran running through the woods in a dream, trying to shoot the three-eyed raven. Robb and Jon encourage him, and Ned’s voice even makes a cameo. An unfamiliar boy shows up just before Bran awakens. He and Osha discuss what a long way it is to the Wall. Indeed, it takes them an entire season to get there (albeit on foot). Going by horse, or jetpack, is clearly far faster. 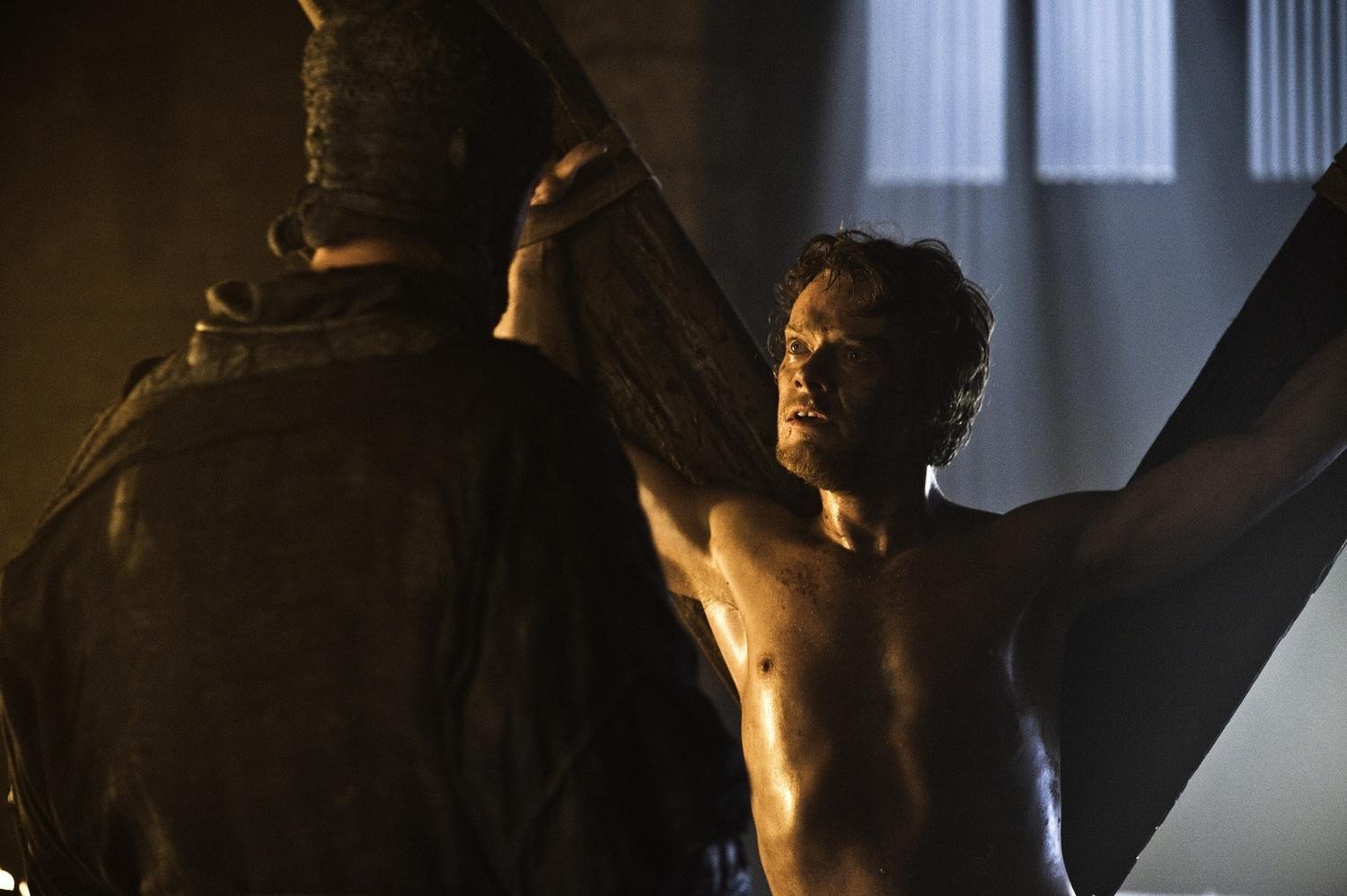 At Harrenhal, Robb breaks the news to Catelyn that her father has died, Bran and Rickon are missing, and Winterfell is in ruins. (“Which do you want first, the bad news or the really bad news?”) Catelyn asks if Robb has heard from Theon, and we cut to him tied to a wooden setup that looks oddly like the sigil on Roose Bolton’s armor in a previous scene. A captor tortures him. This will get old fast for some viewers.

We next have a lovely foreground shot of Jaime’s stream o’ No.1 arcing past Brienne in the background as she looks off woodenly. Their banter is a highlight of the episode. Jaime discerns that Brienne fancied Renly, but after mocking her, him and Loras, he turns sympathetic: “I don’t blame him. And I don’t blame you, either. We don’t get to choose who we love.” They encounter a commoner in the woods; Jaime wants Brienne to kill him, but she refuses. Of note: The man has sticks or something strapped to his horse in shape of an X, like the cross Theon was on. Coincidence, or a little joke from the producers?

At King’s Landing, Joffrey orders around a tailor and talks to Cersei about Margaery, but says, “This is becoming one of the most boring conversations I’ve ever had.” Shae is wary of Littlefinger’s interest in Sansa, who is invited by Loras to see Margaery and their grandmother. 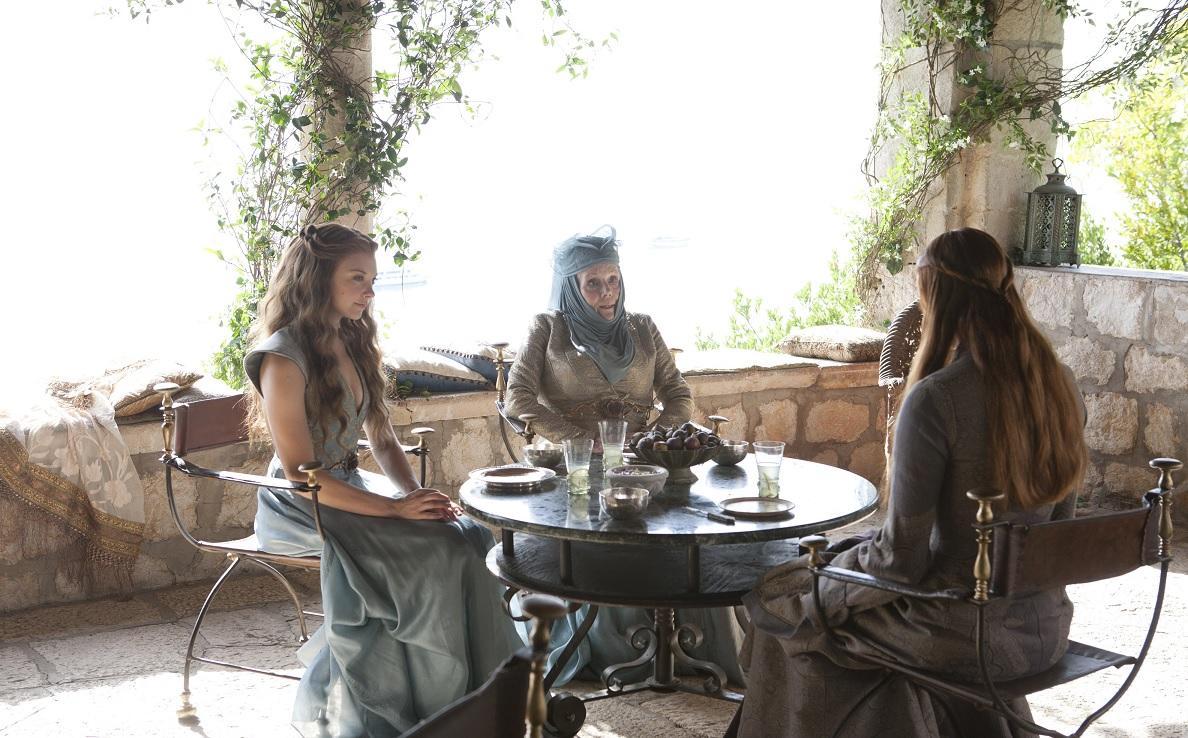 Lady Olenna introduced and immediately has all the great lines, for instance: “Loras is young and very good at knocking men off of horses with a stick. That does not make him wise.” And:  “Once the cow’s been milked, there’s no squirting the cream back up her udder, so here we are to see things through.” And: “The cheese will be served when I want it served, and I want it served now.” Olenna corners Sansa about Joffrey. At first she stammers and recites the party line about him being awesome and her family being traitorous, but finally admits he’s a “monster.” Margaery is all eh, whatevs, I’ll deal.

En route to Riverrun for the funeral, Robb and Lord Karstark argue over war strategy. “I think you lost this war the day you married her,” Karstark says of Talisa. Foreshadowing…

Catelyn works on a dreamcatcher-like art project and recounts to Talisa making a similar dreamcatcher-type object when Jon Snow was sick as a child. They have an extended, heartfelt conversation about her conflicted feelings for Jon. 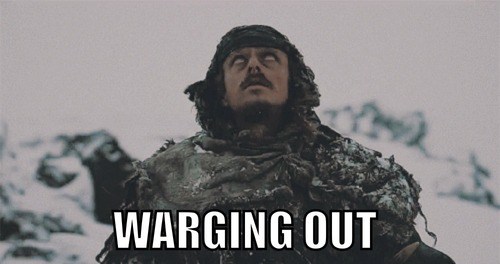 North of the Wall, Jon is confused upon his introduction to Orell the warg. “What, you never met a warg?” asks Ygritte. Well…

Rast taunts Sam, but Grenn, Edd and Mormont help him out.

South of the wall, Jojen makes a dramatic entrance where Bran and company are resting, and Meera sneaks up behind Osha. Jojen quickly shows he is not intimidated by Summer. 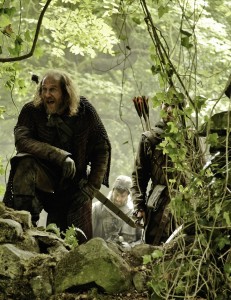 In the Riverlands, Gendry asks Arya what I recall wondering myself as I watched Season 2 (then Unsullied): Why didn’t she have Jaqen kill Joffrey or Tywin. But they and Hot Pie are intercepted by the Brotherhood Without Banners. Anguy shows off his archery skills and Thoros of Myr even sings “The Rains of Castamere,” as the show continues its efforts to familiarize viewers with that tune ahead of the Red Wedding.

Tyrion and Shae discuss protecting Sansa. Shae accuses him of being attracted to Sansa. Semi-foreshadowing here, what with the soon to be announced engagement.

Margaery manipulates Joffrey by dissing Renly and fetishizing his new crossbow that, as he helpfully points out for future viewers of “The Children,” is cocked using a lever and not a crank.

Theon is tortured further, and a “Boy” says, “Your sister sent me,” implying he’ll be soon rescued.

Jojen and Bran have a Very Important Talk. “When I told my father about your father” dying, Jojen tells him, “for the first time in my life I saw him cry.”

“Your father is Howland Reed,” Bran says in wonder. “He saved my father’s life during the rebellion.” Gosh, if only Bran could see that event play out!

Arya, Thoros and others eat and drink at an inn. Thoros is about to let them go when in walks Anguy and an “uncommonly large” man with a bag over his head. Turns out it’s The Hound. Arya tries to skirt around him, but it’s too late, he’s spotted her: “What in seven hells are you doing with the Stark bitch?” She and he will spend much of the next two seasons together.

Jaime steals one of Brienne’s two swords (ha) and they fight on a bridge — he’s surprised by her skills — only to be taken by a group of men led by someone named Locke, and guided by the farmer from earlier. The men carry flags bearing “the flayed man of House Bolton.” Hint, hint. Man, in retrospect it should have been obvious where Theon was even to us at-the-time-Unsullied. 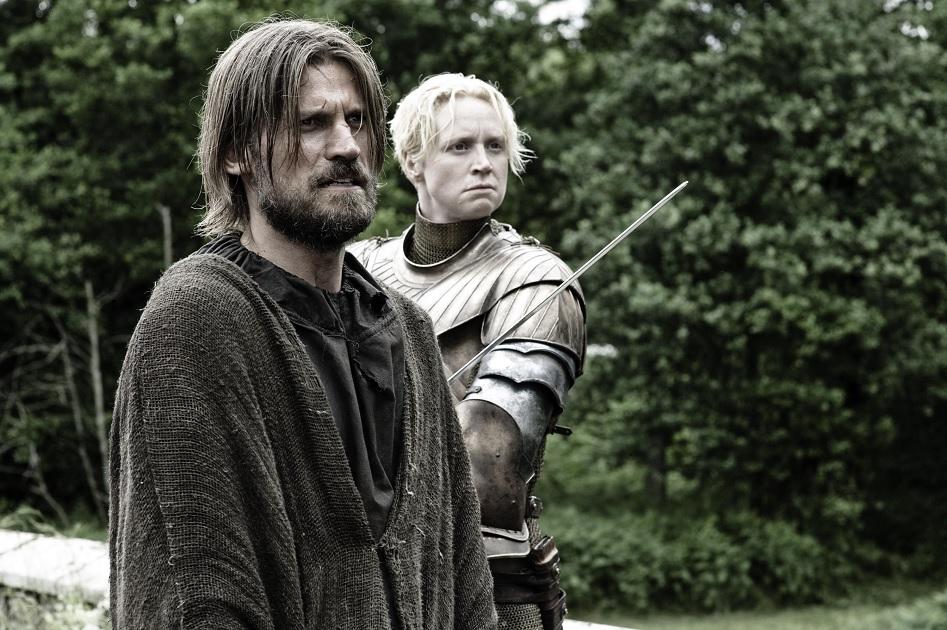 Introductions: A bunch of important ones! Lady Olenna, Orell, Jojen and Meera Reed, Thoros of Myr and Anguy, “Boy” a.k.a. Ramsay Snow, Locke

Big Moments: Lady Olenna draws the truth out of Sansa (and gets her cheese when she wants it); The Hound and Arya are brought together; Jaime fights Brienne on the bridge.

“We don’t get to choose who we love.” – Jaime to Brienne

“The raven brings the sight.” – Jojen to Bran. (It also brings a poorly executed marketing campaign.)

No one died onscreen! And so this was the episode’s entry for Beautiful Death: 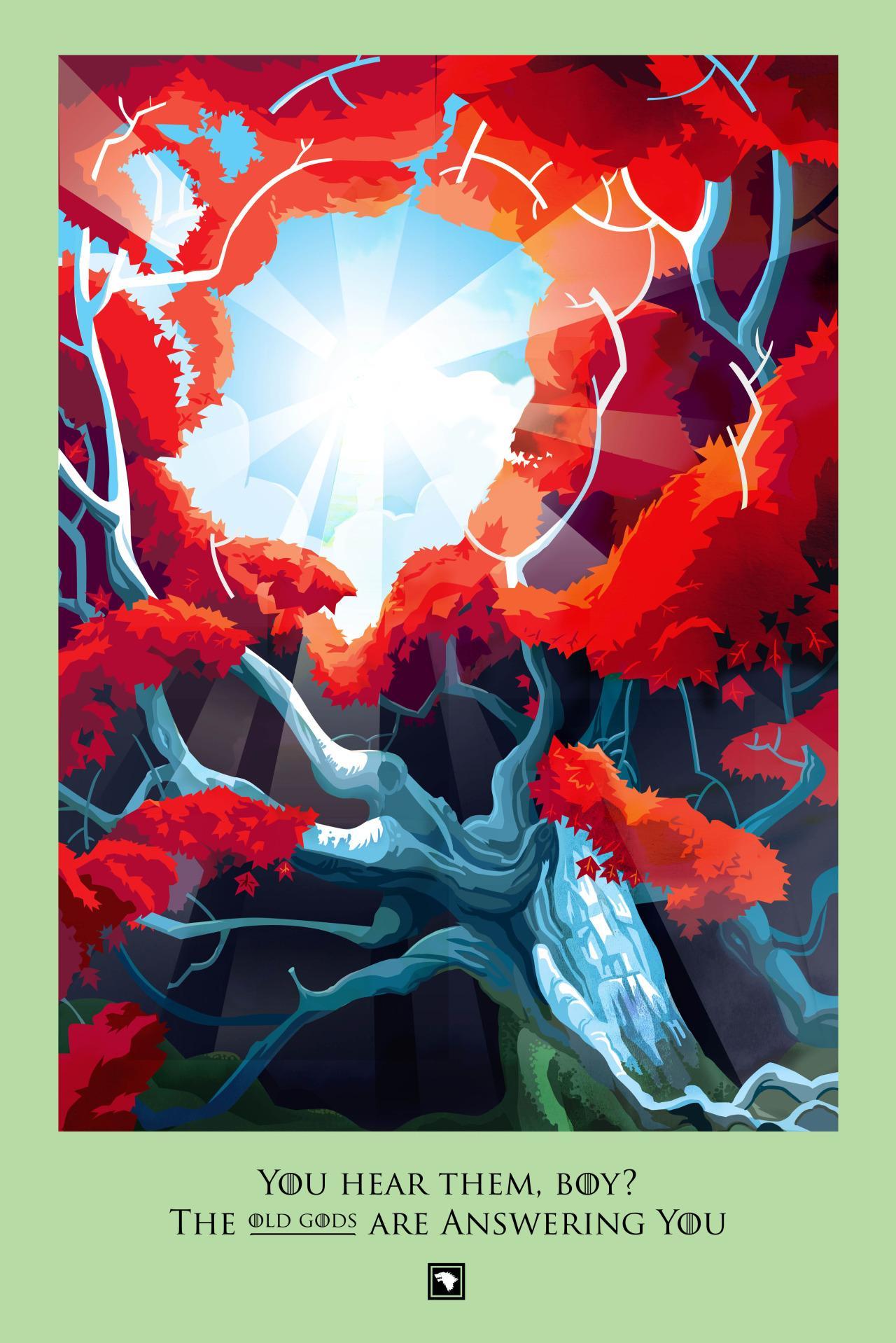