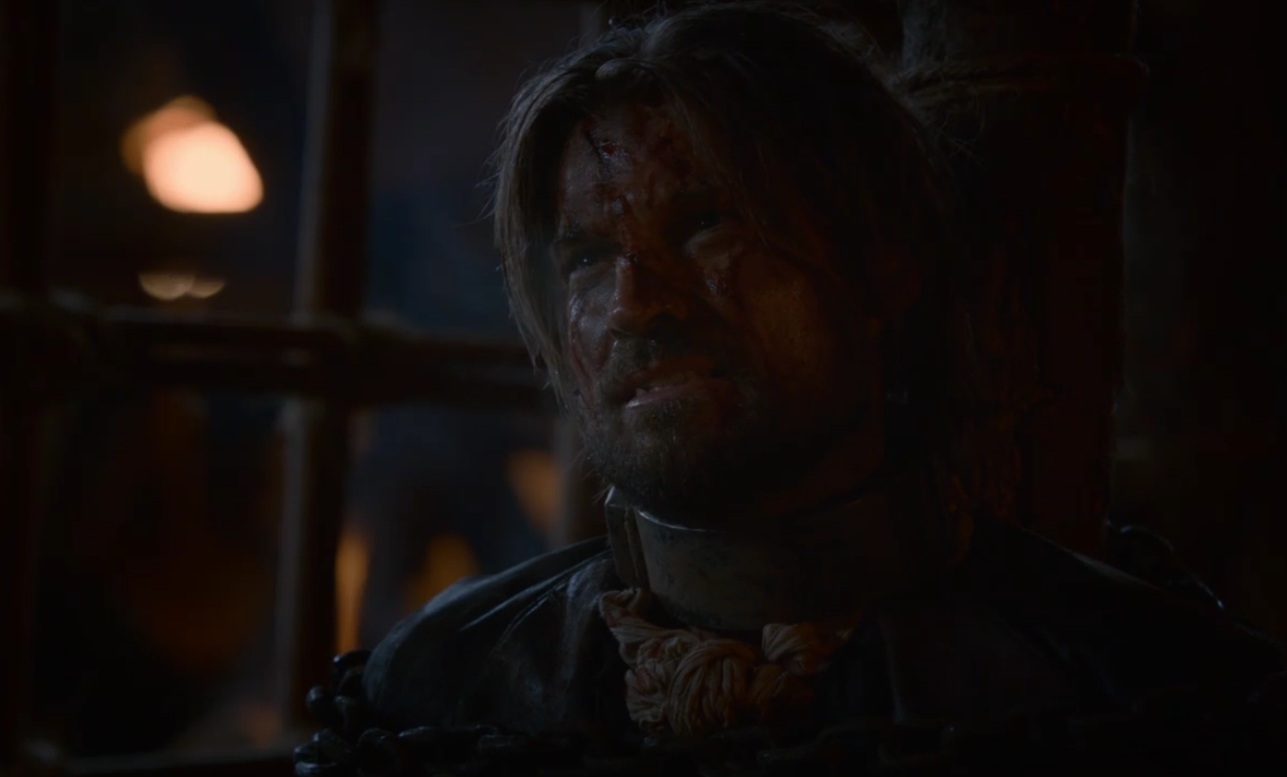 For today’s Memory Lane, we’re welcoming another guest writer to Watchers on the Wall. He’s a regular WotW commenter, and you can find him on Twitter at @JKozal. Please give a warm Watchers welcome to Jared Kozal!  -Sue the Fury

Honor in Westeros is more than just personal integrity – it’s a form of social currency. In a feudal system where men and women swear their lives to the service of higher lords and higher causes, houses can rise and fall based on how much someone values his or her word. But how honor is defined – whether it means upholding your vows to others or remaining loyal to a personal code – is a muddy concept, and never more so than when it collides with that other great pillar of human existence – love. Multiple characters struggle with this dichotomy in “A Man Without Honor,” yet like all things in Game of Thrones, the conflict is seldom a simple one.

Few characters better embody that conflict than Jaime Lannister – the titular ‘man without honor’. This episode – brilliantly written by David Benioff & D.B. Weiss, and directed by David Nutter – is a great one for Nikolaj Coster-Waldau, and the actors who populate House Lannister in general.

Jaime killed the Mad King – a decision that could be eminently justified based on what was at stake. Yet he committed the cardinal sin for a Kingsguard, and he has paid a bitter price for falling on his sword (or rather, getting Aerys to fall on it). Jaime has also fallen in another way – he’s deeply in love with his sister, Cersei. The accusations that he has shit for honor trouble him, but for the moment, he remains unrepentant. 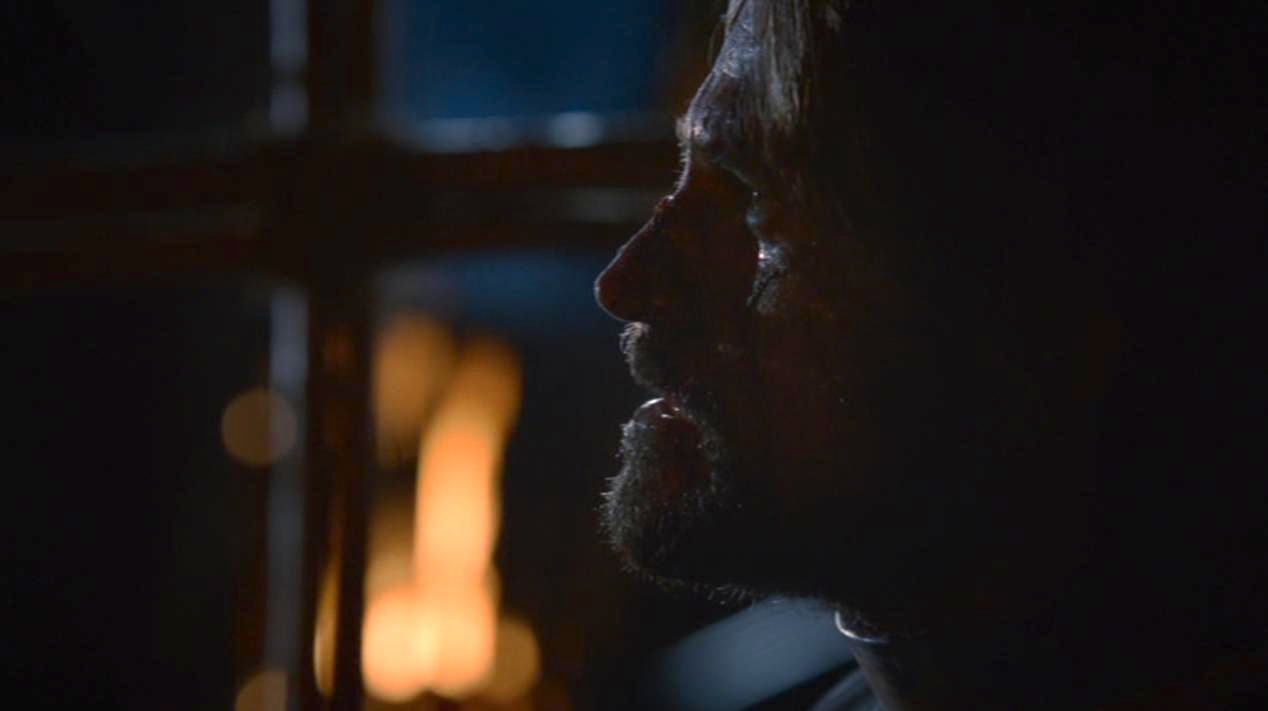 Jaime’s all-consuming goal is to return to the woman he loves, and nothing will stand in his way. In the hopes of achieving that end, he breaks yet another taboo – kinslaying. Alton Lannister is only distant kin, but he is kin nonetheless; a boy who worshiped his legendary cousin. Jaime indulges Alton by offering up his admiration for the great Barristan Selmy – a paragon of knightly virtue, and “A painter that only used red.” It’s a riveting monologue (at the time, Coster-Waldau claimed it was his favorite scene that he had ever done). Yet the reverie comes to a merciless end when Jaime beats his cousin to death, strangles Torrhen Karstark, and escapes into the night.

Jaime is recaptured, but the damage is done. Rickard Karstark demands the Kingslayer’s head as vengeance for his slain son. Catelyn intervenes to save Jaime from summary execution, but is unable to conceal her disgust for the man who threw her son from a window to protect his not-so-secret love. She denounces the Kingslayer as a monster who forsook every vow he ever took. Jaime’s response is one of my favorite quotes in the entire series – one that exposes a fundamental conflict at the heart of Westerosi society.

There’s a lot to consider there! Unfortunately, Lady Stark doesn’t get the chance because Jaime also taunts her about Jon Snow – a stain on Ned’s honor, and a sore spot for Catelyn. She calls for Brienne’s sword, and Jaime smiles. A crucial domino falls, but we’ll have to wait for the next episode to see which way.

Speaking of Jon, his own struggle between honor and love begins here. He and Ygritte are awoken from their subzero snuggle by a predictable guest – one whose presence wickedly delights Ygritte and mortifies Jon. Ygritte needles Jon about his life choices, including the fact that he’s never been with a woman, choosing instead to swear his life to an order whose noble purpose has been lost.  Her flirtatious banter flusters Jon to the point that she’s able to escape. Jon pursues her … and she leads him right to her friends.

Oh, and Ygritte says her catchphrase for the very first time!

Love also bedevils Jon’s brother Robb in the Westerlands. When Talisa arrives to petition the Young Wolf for supplies, Robb is pleased to see her, but no one else is. Robb invites Talisa to accompany him to the Crag (a nod to the origins of Talisa’s counterpart in the novels). As the two leave together, his bannermen whisper their discontent. The Young Wolf’s absence from the camp enables the calamity that follows.

In King’s Landing, Cersei Lannister is also struggling with the consequences of the forbidden love she shares with her brother. Unlike Jaime, her struggle is a quieter and more personal one. When Sansa discovers to her horror that she can now bear Joffrey’s children, Cersei imparts some wisdom to the daughter that Ned sacrificed his honor and his life to save. 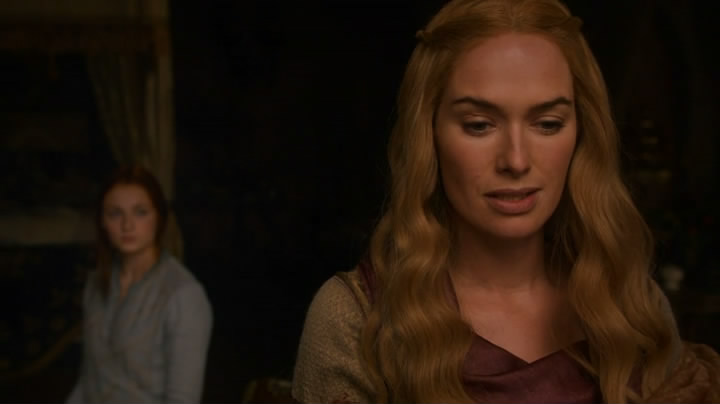 “The more people you love, the weaker you are. You’ll do things for them that you know you shouldn’t do. You’ll act the fool to make them happy, to keep them safe. Love no one but your children. On that front, a mother has no choice.”

Yet even when Cersei closes her heart, what love remains still exacts its cost. Later, she tacitly admits Joffrey’s true parentage to Tyrion, and acknowledges that she has lost control of her son. “Sometimes, I wonder if this is the price … for what we’ve done. For our sins.”

Tyrion assures Cersei that she has beaten the odds, and her icy veneer cracks. Cersei so rarely shows vulnerability that to see her break down is a striking image – especially in the presence of the brother that she loathes rather than the one she loves. In that moment, Tyrion approaches his sister as if he wants to comfort her. He gets surprisingly close before Cersei notices and seizes up, and Tyrion has to awkwardly play off his approach. It’s a great moment of acting by Peter Dinklage and Lena Headey. 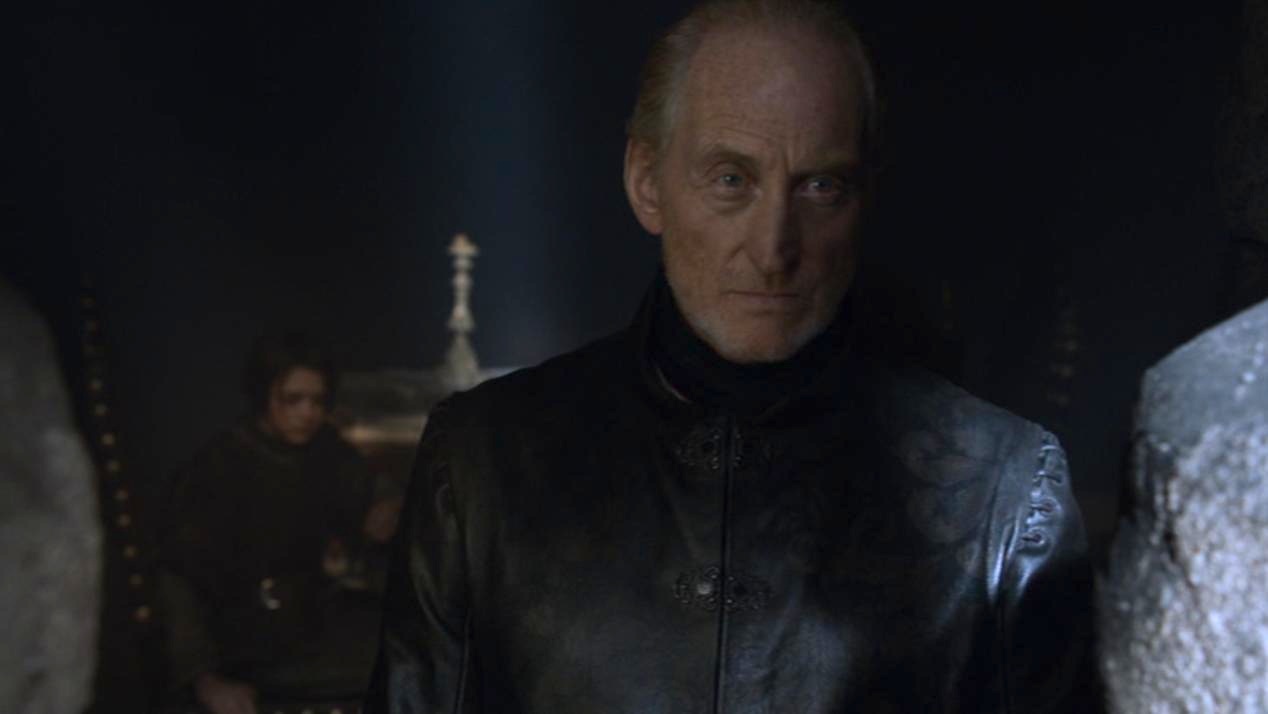 One man who seems to be free of the burdens of both honor and love is Tywin – he’s more concerned with legacy. The Lannister patriarch claims that Arya reminds him of his daughter, and yet – free from the burden of molding her in his image – he seems much more at ease with this daughter of his enemy than he is with any of his own children. In a spectacular scene, Tywin and Arya discuss war, legacy, and history, including some wicked Targaryen trivia (Aegon Targaryen burning Harrenhal! Rhaenys and Visenya and Dark Sister!) The old lion and the young wolf girl appear to genuinely enjoy one another’s company, and Arya vacillates between her desire to kill Tywin and taking pleasure in the praise that he offers her. Their rapport is so strong that Arya gets a little cheeky – cheek that Tywin enjoys while warning her not to push her luck. And so the magical scene ends.

By no means is the struggle between love and honor exclusive to the Lannisters and the Starks. It’s often said there’s no honor amongst thieves, and in Qarth, that appears to be the case. Tasked by Dany with finding her missing dragons, Jorah visits Quaithe. The disgraced knight is able to extract the location of the culprit from her by acknowledging his past betrayal of Dany, and the love he hopes will be his redemption. 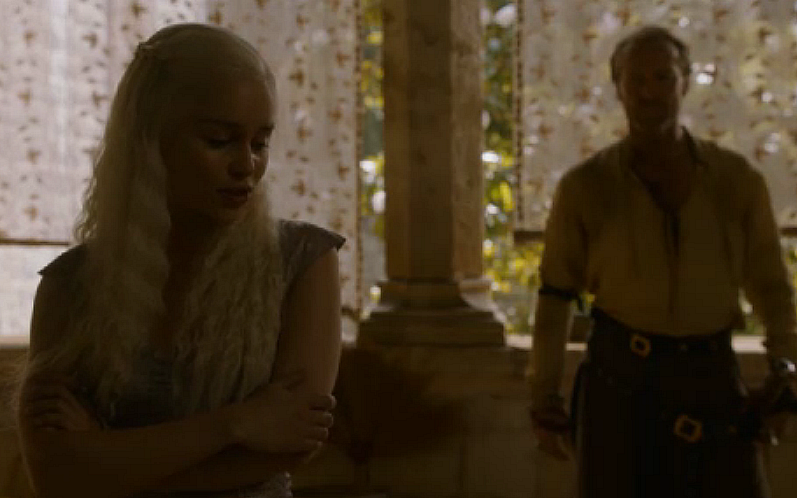 Dany’s misadventures in Qarth while searching for her dragons aren’t the most popular storyline that Game of Thrones has ever brought to our screens. However, the mystery sparks this week when the man we call Ducksauce is revealed to be far more nefarious than expected. As Xaro tells a despairing Dany, “a man is who others say he is, and no more.” Xaro is obsessed with changing what others say he is by trading in the title of ‘upstart’ for ‘King of Qarth’. To that end, he betrays his guest and allies with Pyat Pree – an alliance sealed with fire and blood. Xaro turned Dany’s dragons over to the warlock, who fulfills his obligations by slitting the throats of the Thirteen using the world’s worst party trick. As Dany watches in horror, the warlock mockingly informs Dany that her dragons wait for her in the House of the Undying. Unprepared to deal with this strange sorcery, the Khaleesi flees.

Yet it is in Winterfell where the loss of honor has the gravest consequences of all.

Theon Greyjoy wanted nothing more in life than to be a Stark, only to realize that it was never truly possible. Pressure from his birth family convinced him to turn his cloak, yet that decision won him no love either. When Osha tricks him and absconds with the Stark boys, Theon organizes a hunting party, and he pursues his would-be brothers to a farm, where the trail goes cold. But Dagmer has an idea … 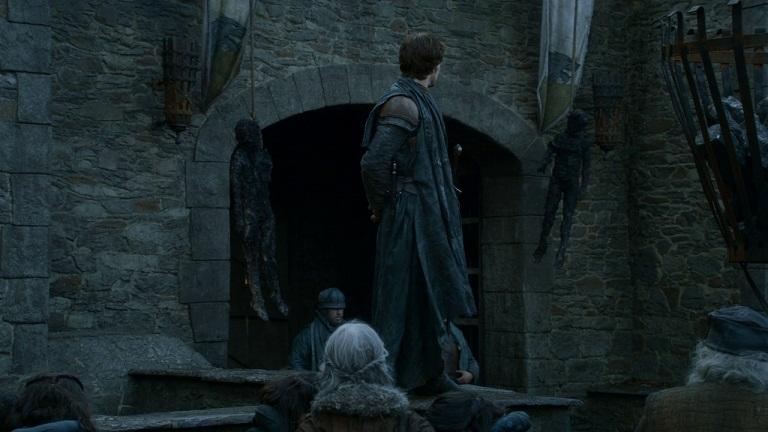 Theon denounces the residents of Winterfell for abusing his supposed kindness, and reveals the Iron Price of their ‘betrayal’ – two young boys, murdered, mutilated, and burned black. Those who of you who were Unsullied at the time – I’d be curious to hear whether or not you believed that Bran and Rickon had actually been killed. Luwin’s wail of anguish certainly sells that horrifying possibility … but it’s still not as haunting as the look on Theon’s face.

The conflict between honor and love can be agonizing, but when a man discards them both, he’s left with nothing at all. As Rodrik Cassel foretold in the previous episode, Theon Greyjoy is truly lost. The gods help him now. 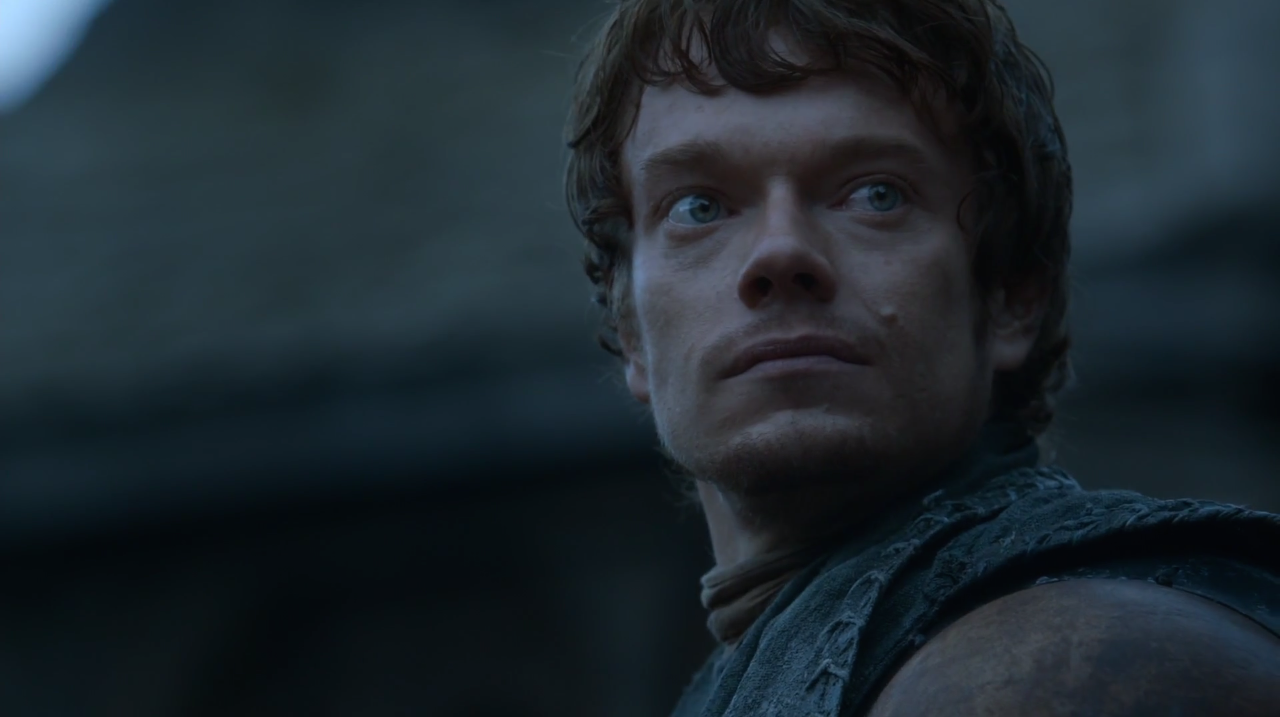 Introductions: John Stahl’s Rickard Karstark debuts in this episode, as does his son Torrhen Karstark (briefly).

Deaths: Alton Lannister and Torrhen Karstark are casualties of Jaime’s ill-fated escape attempt. The Spice King and ten other members of the Thirteen are assassinated by Pyat Pree and his creepy clones at Ducksauce’s behest. Finally, the orphan boys Billy and Jack are slain by Dagmer with Theon’s consent, and their corpses are burned so that they can be passed off as Bran and Rickon.

“Did you pull a knife on me in the night?” – Ygritte

“It’s a good thing I am who I am. I’d have been useless at anything else.” – Jaime

“I’m not well-suited for imprisonment. Shocking, I know. Some men are. Ned Stark? I imagine he made an excellent prisoner, right up until the end. Not me, though. My life has left me uniquely unfit for constraint.” – Jaime

“You’ve become a real she-wolf in your later years. There’s not much fish left in you!” – Jaime

“An upstart and a charlatan. Empires have been built by less. Those on the margins often come to control the center. And those in the center make room for them, willingly or otherwise.” – Xaro Xhoan Daxos 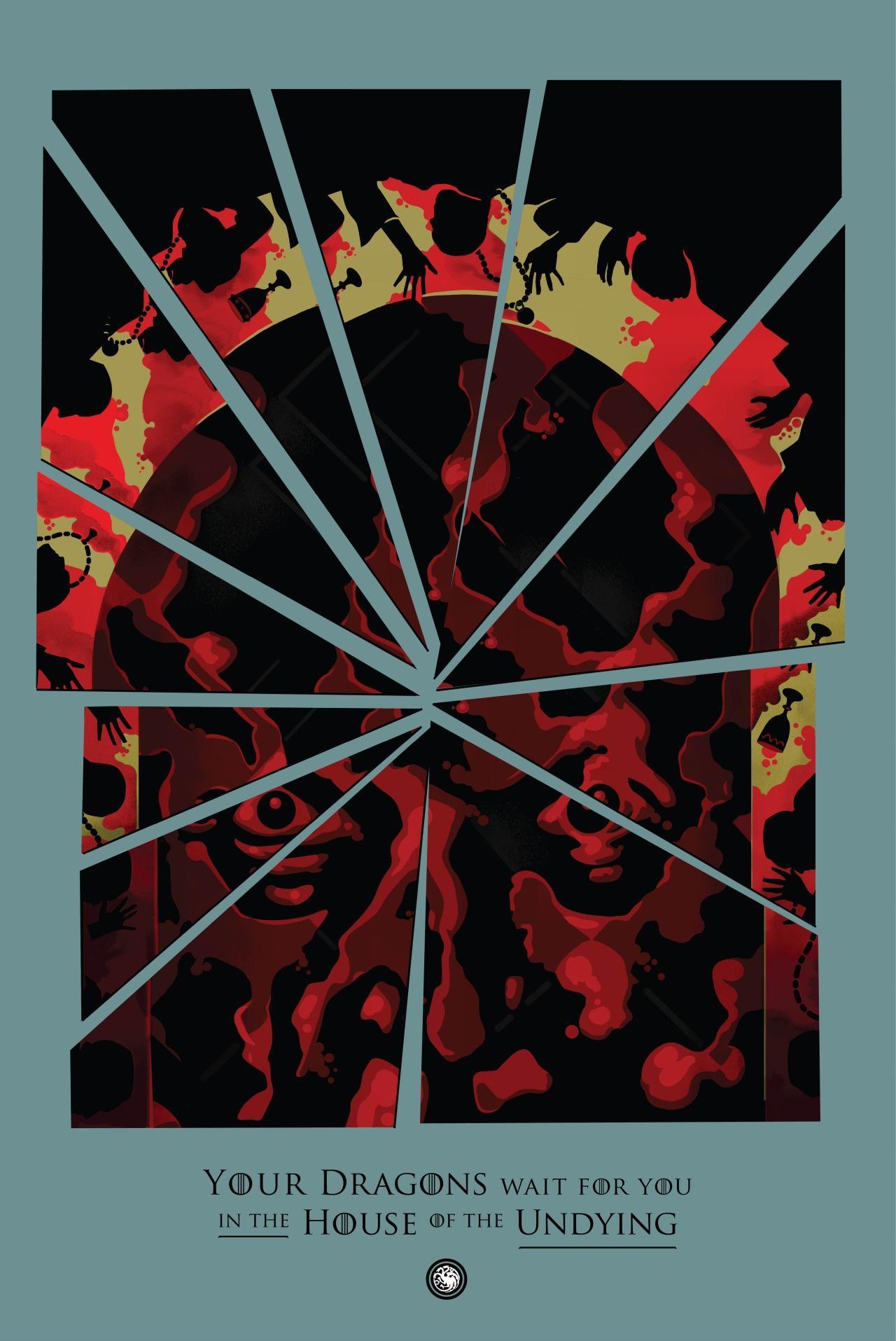