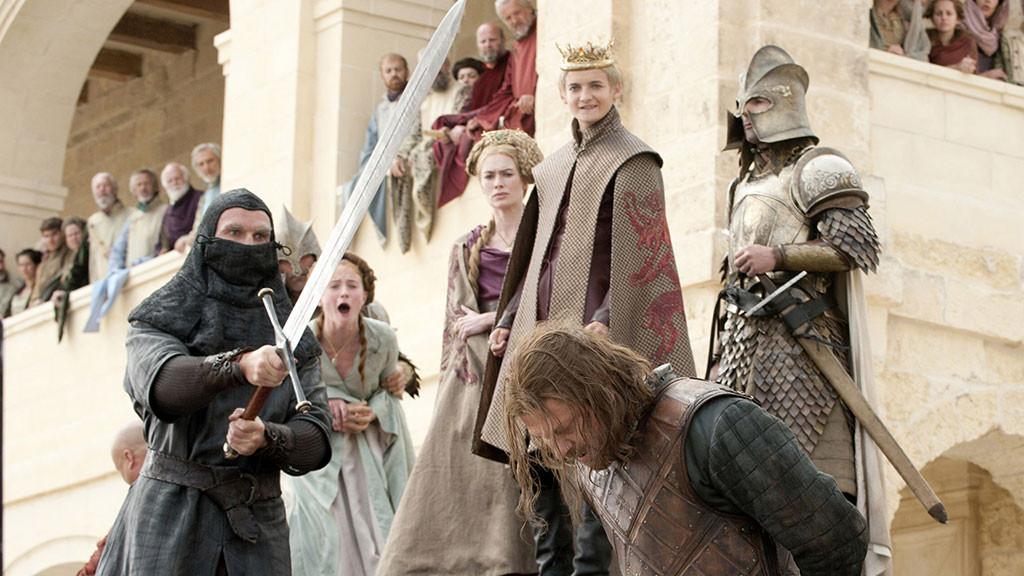 We’ve hit the episode in our season 6 countdown. The episode that rewrote the rules and heralded Game of Thrones as not just another TV show. “Baelor” was written by David Benioff and D.B. Weiss and directed by Alan Taylor. It was a tense, emotional and shocking (for the Unsullied anyway) episode.

Obviously this episode is best remembered for what happened at the end, but the episode also had a number of other moments that would shape the course of the story going forward. We first meet Shae, who will play a pivotal role in Tyrion’s storyline. We also are introduced to the devious Walder Frey, when Catelyn treats with him for passage through his castle/bridge, The Twins. She is able to secure passage, but in exchange has to give up her son Robb’s hand in marriage. But in so doing, Robb is able to decisively win his first battle, when he successfully defeats Jaime Lannister’s host and captures the Kingslayer himself.

Across the Narrow Sea, Daenerys is desperate to save Khal Drogo from his festering wound, so she enlists the black magic of Mirri Maz Duur to attempt to save him. Up at the Wall, Jon is struggling between doing his duty or dishonoring himself and going south to fight alongside his half-brother. Maester Aemon reveals that he once had a similar choice, in a wonderfully delivered monologue by Peter Vaughan.

Ned Stark is faced with a similar decision, when he is trotted out onto the steps of the Sept of Baelor to pay for his supposed treason. He can choose to betray his honor and confess to his “crimes” and spare his life and potentially the lives of his children. Or he can continue to remain steadfast about his claims and die. He chooses the former and everyone watching is certain that Ned will be shipped to the Wall to meet up with his bastard son and come back to exact vengeance on House Lannister. But King Joffrey (and George R. R. Martin) have other ideas. Despite Ned’s confession, Joffrey orders his execution anyway. Ilyn Payne swings the sword and the audience gasps.

This was of course a big moment for the show and it was executed (no pun intended) perfectly by director Alan Taylor. In fact, the whole episode was expertly shot by Taylor. Taylor’s style was much more cinematic than the directors before him and this style of filming the show carried over into later seasons and became a Thrones staple. (Of course, the increased budgets in later seasons helped as well.) It’s no surprise that Taylor went on to direct big-budget Hollywood films after his work on Game of Thrones, but he left his legacy with the show in his episodes.

Ned’s execution also led to something else that seems to be wholly unique to Game of Thrones: reaction videos! Larry Williams of OtakuASSEMBLE had the most notable reaction to Ned Stark’s death.

Of course, the moment led to some memes as well. Arrested Westeros, as they so often do, pretty much nailed it. But the truth is this episode was an emotional one. Even for someone like me who knew what was coming. The little bit where Ned sees Arya in the crowd was heart-wrenching and really drove home the drama of the moment. The whole episode was good, but the final scene was truly great and helped catapult Game of Thrones into the phenomenon it is today.

Introductions: The slimy Walder Frey and the sultry Shae both make their first appearance in this episode. We also see Jon’s sword Longclaw for the first time, as Lord Commander Mormont gifts it to him for saving his life. We learn the sword is Valyrian steel which may not mean much to the uninitiated viewers at the time, but that fact comes into play in season 5’s epic “Hardhome” where we see Longclaw absolutely destroy a White Walker.

Deaths: Qotho is killed by Jorah after he attempts to stop the black magic ritual being performed on Drogo. And, of course, poor Ned Stark dies at King Joffrey’s command.

“Stark, Tully, Lannister, Baratheon. Give me one good reason why I should waste a single thought on any of you?” – Walder Frey

“We’re all human. Oh, we all do our duty when there’s no cost to it. Honor comes easy then. Yet sooner or later in every man’s life there comes a day when it’s not easy. A day when he must choose.” – Maester Aemon