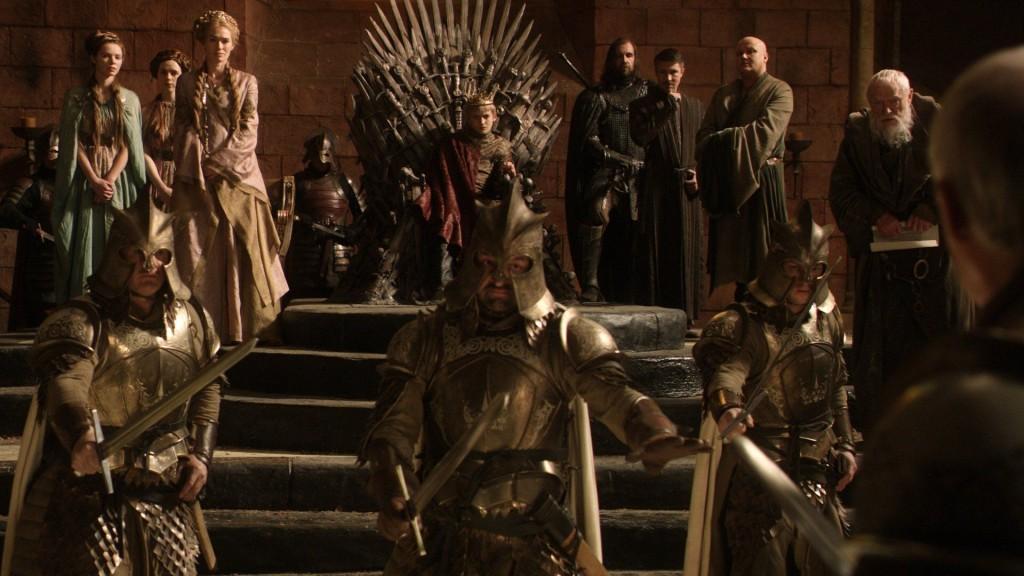 Today’s trip down memory lane features the first episode penned by A Song of Ice and Fire author George R.R. Martin: “The Pointy End,” directed by Daniel Minahan. The episode features the iconic last scene with Syrio Forel, the Lannisters’ capture of Sansa and Jon facing off with a strange new enemy. With Martin writing the episode, characters are bound to be pulled in all sorts of directions so as the audience, we sat back and enjoyed the chaos.

The episode opens with bloodshed galore as House Lannister is purging King’s Landing of all things Stark. Ned is locked away in the dungeons, Sansa is taken to be Joffrey’s, and Arya slips away with a little help.

A lot of really memorable scenes in this episode. First was the exit out of the Braavosi swordmaster Syrio Forel.

Here’s some behind the scenes rehearsal footage:

Miltos Yerolemou brought Syrio to life with the same level of finesse as his character’s fighting skills. With ease, Forel incapacitates the Kingsguard (with only a wooden sword, I might add) until only he and the infamous Meryn Trant are left. Trant snaps Syrio’s training sword as Arya flees, after begging her master to join her. He responds with words to the God of Death: “Not today” and Arya adds the first name to her list. It’s really satisfying to go back and watch this scene after “Mother’s Mercy” when Arya puts a line through the name of Meryn Trant.

Arya finds her blade and runs it through the stable boy who tries to capture her. She contrasts her sister in this moment as she refuses to comply. Sansa does as she’s told and she endures. From here, the Stark sisters go their separate ways.

Ned and Varys is an interesting pair up we don’t see too much of. He brings him water, news, and some clarity. He observes Ned’s foolishness trusting Littlefinger over him and in showing mercy to the Lannisters ultimately killed Robert. He tries to persuade Ned to dishonor himself, bury the truth, and take the black. He also shares the news of Tyrion’s freedom and Ned knows he’s condemned. He was raised by soldiers and learned how to die long ago. In a final moment he asks Varys who he truly serves: 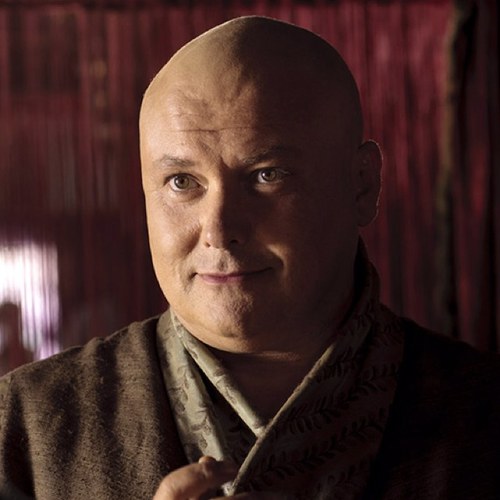 The realm, my lord. Someone must. – Varys

Reading this quote after his actions in Season 5, we can see he’s actually being truthful. I’ve always preferred Varys to Littlefinger and scenes like this really bring out the differences between the characters. Littlefinger deliberately manipulated Ned whereas Varys sought to help him. Sadly, no one ever trusts a eunuch. I may be biased based on my loyalties to House Targaryen but he seems to be playing the more moral game compared to Littlefinger. We don’t know what realm he serves but it isn’t the one of chaos Littlefinger does.

The lioness Cersei begins digging her claws into Sansa as she forces her to write to Catelyn and Robb. The North must bend the knee to Joffrey or there will be war. At the Eyrie, Lysa refuses to lend the Knights of the Vale (to protect Robin) even though her letter set this chain of events into motion. It drives a wedge between the Tully sisters and we see that the characters in this world aren’t simply black and white, no matter who they’re related to. Robb raises the Northern banners and the war between the wolves and lions begins.

At Castle Black, Jon receives the news of his father and is taunted by Ser Alliser. He sneers he’s not only a bastard but a “traitor’s bastard.” The word seems to be a favorite of his when describing Jon as it too comes full circle in “Mother’s Mercy.” Against Lord Commander Mormont’s advice, Jon does something stupid.

Jon also encounters a new enemy of sorts as a Castle Black’s ranger corpse pays him a visit. He’s shocked to find the cadaver unaffected by his attacks when Mormont arrives at the scene. Jon grabs his lantern and heaves it as the body erupts in flames and we learn how to kill wights.

This was a big moment for any first Game of Thrones watch. It answered some questions about the wights but ignited a thousand more.

In the Vale, Tyrion and Bronn make new friends and head towards the Lannister army while the Khal and Khaleesi are challenged in Essos. Daenerys rescues a maegi as the Khal defends her against one of his own. He is cut in the exchange though he dismisses it as a scratch. 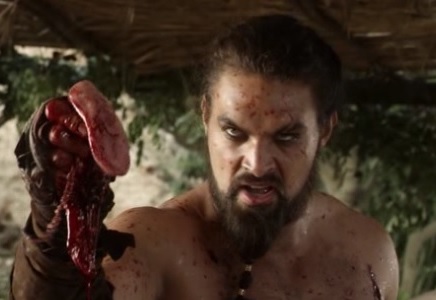 The fight between Drogo and Mago demonstrates why the Khal has never had his braid cut. He dodges the arakh with ease and slaughters his opponent with his bare hands. Jason Momoa is another extremely talented actor who left Westeros too soon and his presence will surely be missed. See you soon, Aquaman!

As the Starks prepare for war, Tywin grudgingly accepts his son and new comrades. Arrested Westeros has a solid interpretation of just how well that exchange went: 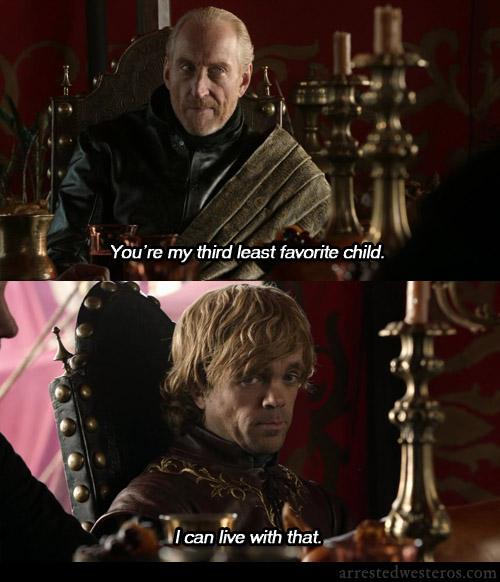 Another set of characters that are always fun to see onscreen together: Charles Dance (Tywin) is a surefire scene stealer but when paired up with the equally theatrical Peter Dinklage, you don’t know who to watch. Dance conveys the sheer hatred Tywin has for his deformed son where Dinklage conveys Tyrion’s sense of uncaring and witty deflection with perfection. Martin’s episodes are saturated with characterization and with such fine actors as these, we have an exceptionally vivid glance into Westeros.

Lastly, we have Ser Barristan’s removal from the Kingsguard. Joffrey blames him for the death of King Robert and commands him to leave. Refusing to accept humiliation, he throws down his sword and states he will “die a knight.” After season 5, these words cut through us like carving a cake.

“The dragon feeds on horse and lamb alike.” – Daenerys Targaryen 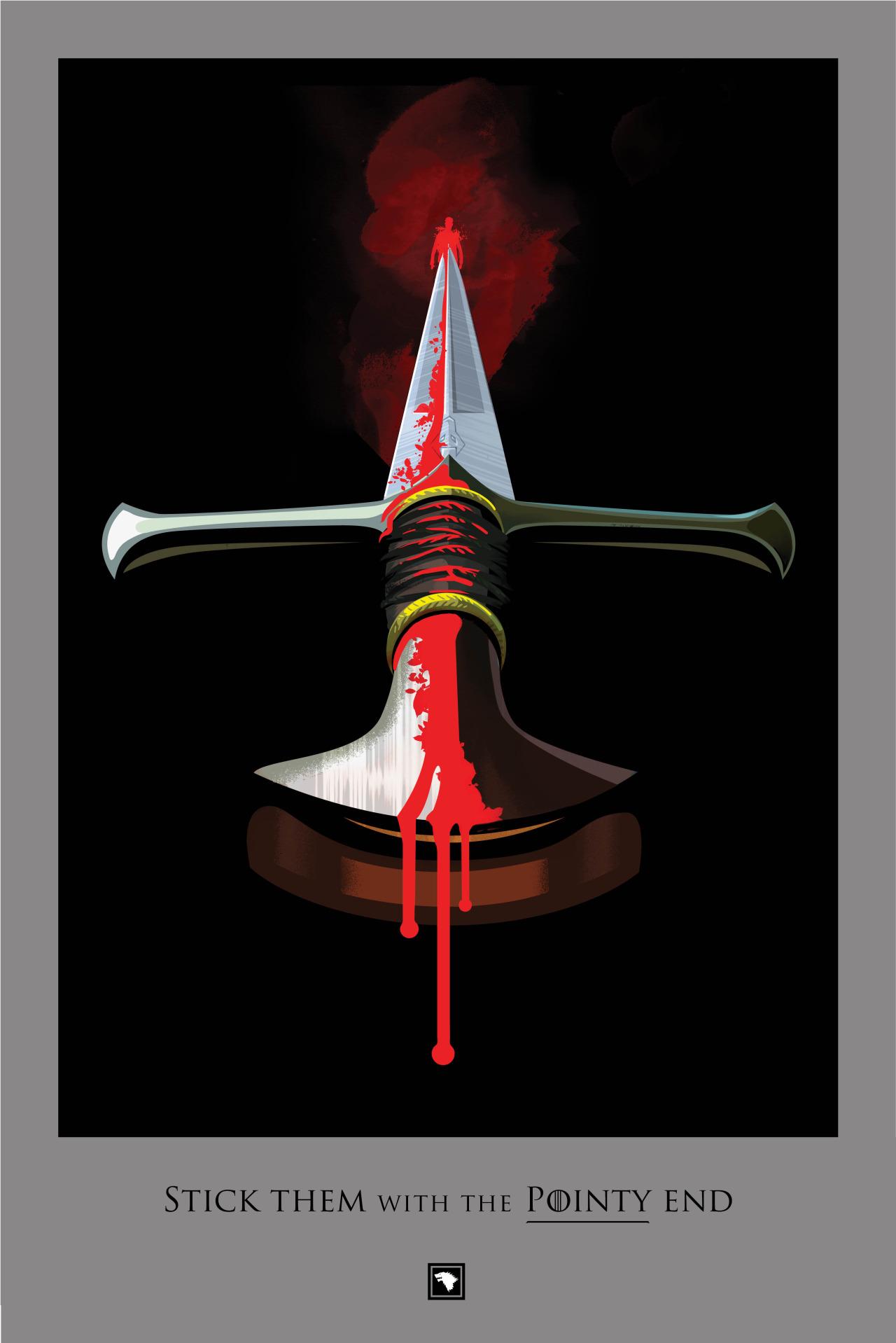 The Pointy End, Artwork by Robert Ball from his “Beautiful Death” collection

The episode’s title quickly became a phrase that was synonymous with Game of Thrones and inspired fan art across the internet: 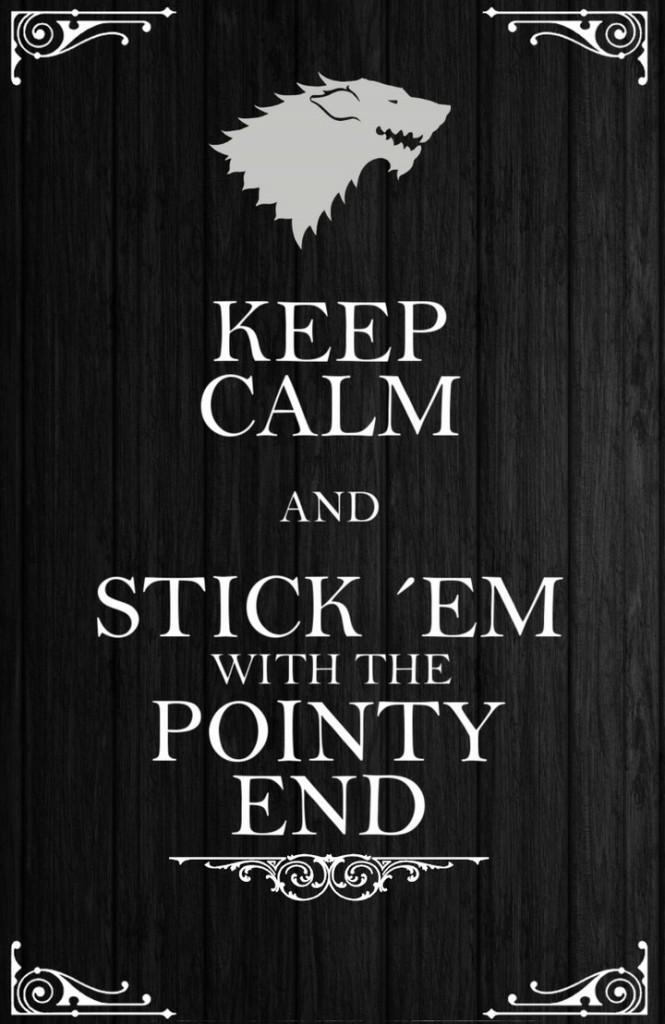 The episode also inspired a wave of propaganda posters from Olivia Desianti over at Society6: 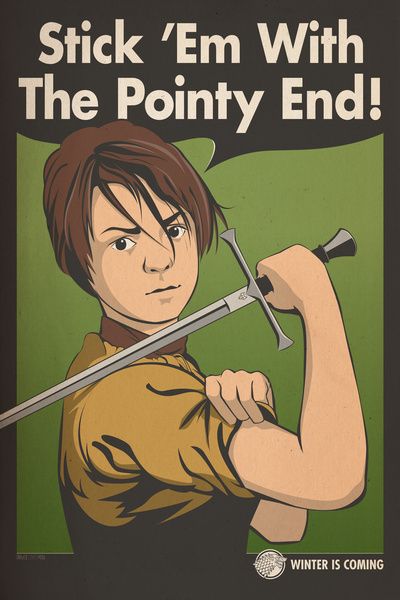 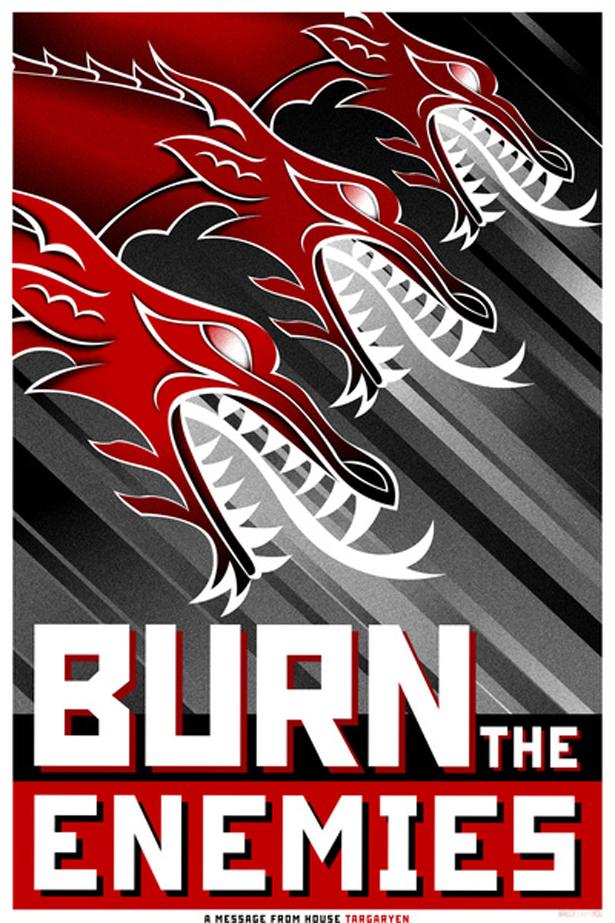 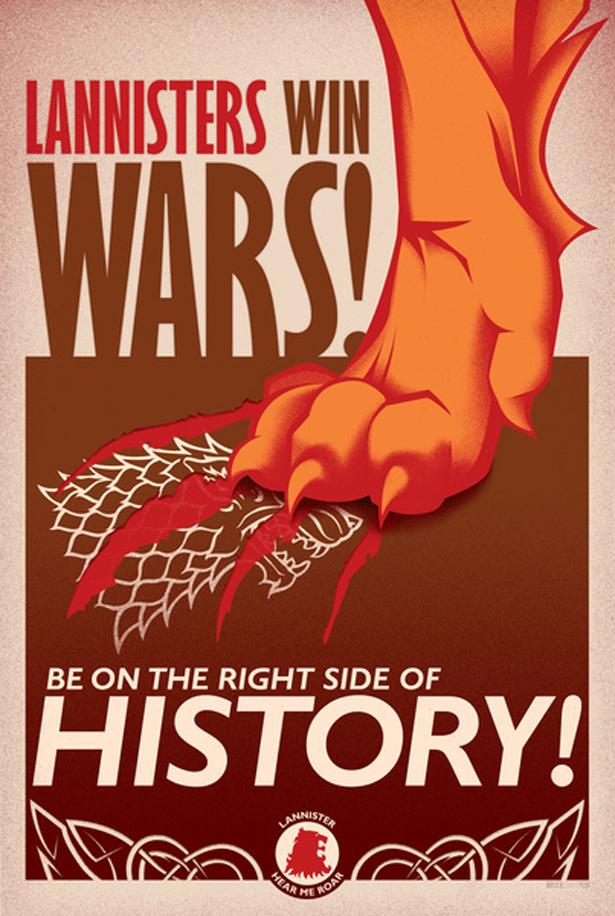 Tomorrow: WinterPhil tackles the series’ 9th episode, the one that broke all the rules for television. It’s time for “Baelor.”