Game of Thrones Memory Lane 105: The Wolf and the Lion | Watchers on the Wall | A Game of Thrones Community for Breaking News, Casting, and Commentary 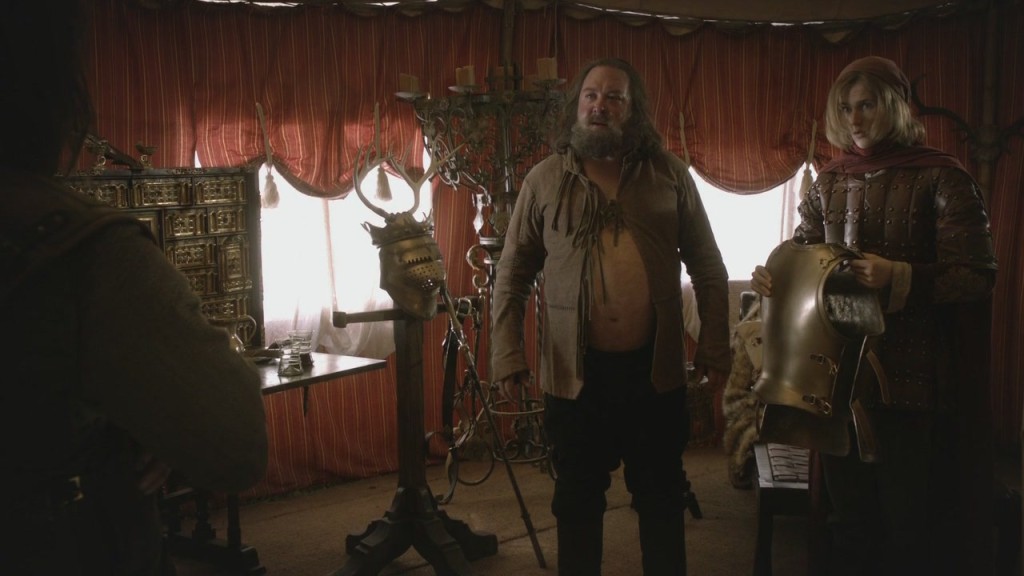 A man has been chosen by the powers to take you down the lane of memories to relive episode 105, which just so happens to be the first time that “batshit crazy” Lysa Arryn ever graced our screens. And while that intro was enough to stir up the most uncultivated of unsuspecting viewers, this 54 minutes was chock full of details, quotes, and info that kept the fandom deliberating even to the present day.

Episode 5 of Season 1 originally aired on May 15, 2011 (time doth fly, just like Robin wished for the bad man) and was written by David Benioff and D.B. Weiss. The episode was once again directed by Brian Kirk.

As viewers were still trying to grasp the complexity of this new television world, the show continued to build on character development while strategically including a geographical picture as well as some historical background. 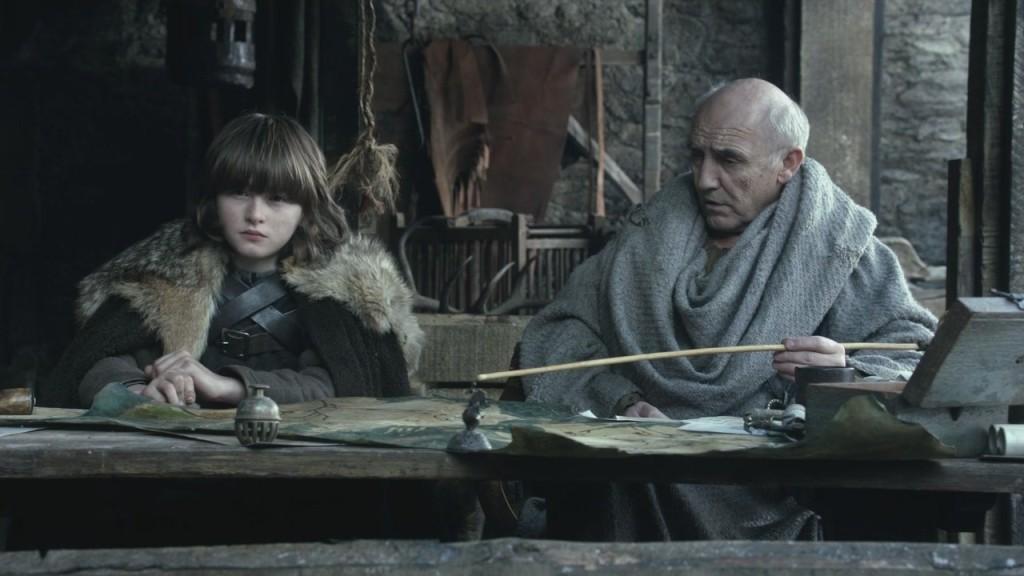 In the episode, Robert tells Ned about dialogue with Jon Arryn advising him to take Cersei as a bride for the sake of having the backing of Tywin Lannister. Maester Luwin quizzed Bran on the Houses of Westeros and their respective sigils and words, naming families that we as viewers had no idea existed.

Varys warned Ned of Robert being doomed just like Jon Arryn and determined the poison used to kill him. The guilty party was identified as the deceased Ser Hugh of the Vale, which also helped explain how Hugh had gone from squire to a knight with brand new armor in such a short amount of time. The question then became, who would pay him to do such a thing? 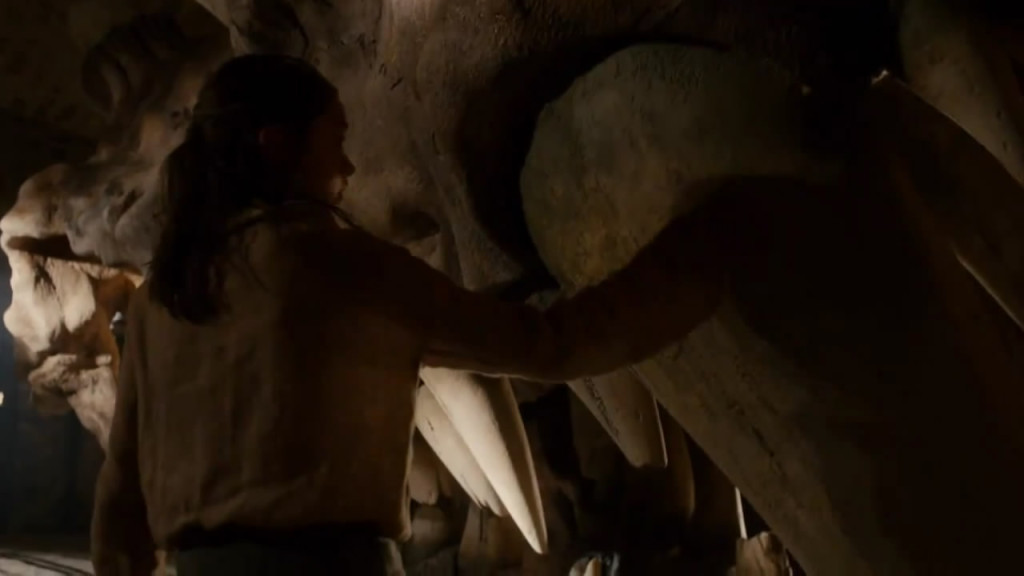 Arya chases a cat into the dungeon and hides in a dragon skull as she overhears Varys and Illyrio Mopatis conversing about Ned and Khal Drogo. This exchange provided an early link to Varys and the Targaryens that many show-only viewers admittedly missed upon the initial viewing, myself included. It was at this point that I realized that the vast majority of dialogue contained in the show held some type of significance, even situations that might seem to be a position for filler conversation.

At a small council meeting, Robert would order that Dany and her baby bump be killed to avoid the child’s claim to the throne. Ned would refuse, temporarily relinquishing his title as “Hand.” 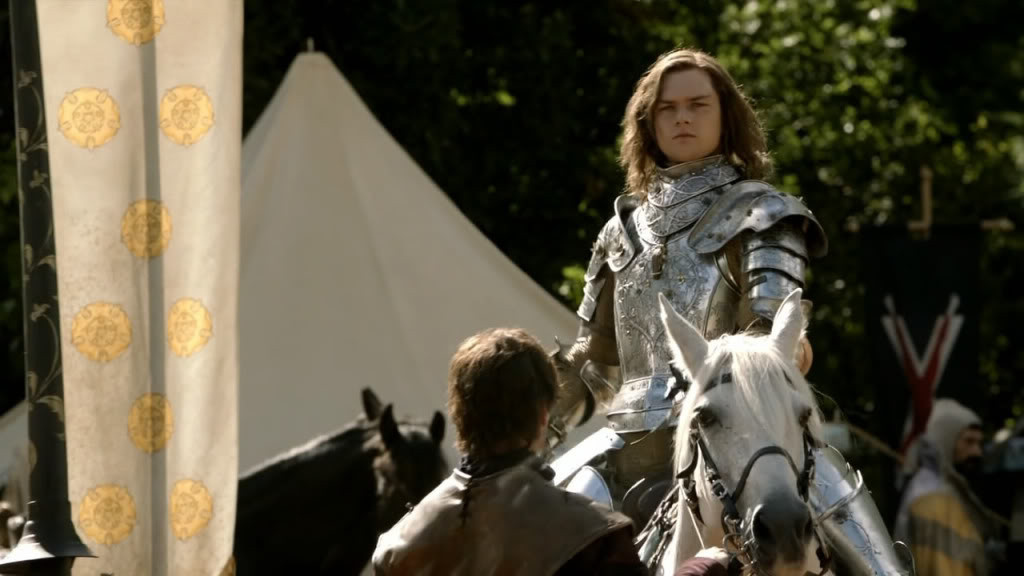 We got the intro of Loras Tyrell, the Knight of Flowers and his quite elaborate, gleaming armor. You could see the Hound attempt to hide the crack of a smile as Loras jousted the Mountain off of his steed. Eventually, the two brothers would spar until drunken Robert yelled for an end to the melee.

Later, we would see the King and Queen sit down for a candid conversation about their 17 years of marriage and viewers received confirmation on how Robert never really got over Lyanna Stark.

Then came our first look at Lysa Arryn, and the world would never be the same… 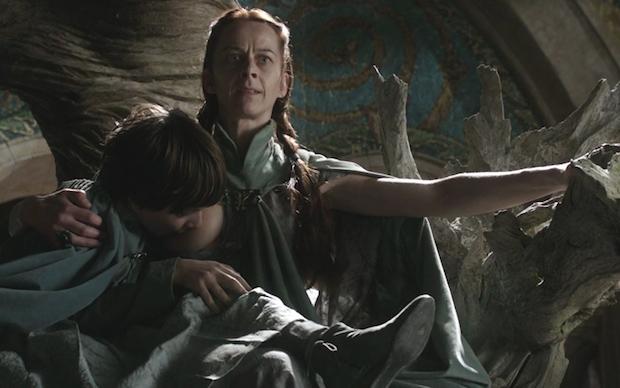 The majority of you know about my affinity for the Lady Arryn (and even more so of my respect for the lovely Kate Dickie). I’ll spare you the recapitulation. But I’ll include this snippet of the interview I did with Ms. Kate as it directly relates to this episode…

Oz: I understand that a prosthetic was used, but even so how did you and Lino Facioli (Robin Arryn) prepare for what I presume was a very uncomfortable scene?

Kate Dickie: Yes we used prosthetic breasts, I hope people know this! Lino who plays Robin was absolutely brilliant in dealing with the breastfeeding scene. We rehearsed it with Brian Kirk the director long before we filmed it and just made sure that we were as comfortable with it as we could be. On the actual day of filming I remember us getting the giggles at first a couple of times in between takes as it was such a bizarre thing to be doing, but on the whole we just treated it like any other scene as much as we could and tried not to get too hung up about it. Lino’s mum was always around on set and Lino would read his book in between shots or we would just chat, so it was all good.

You can read the entire interview here. 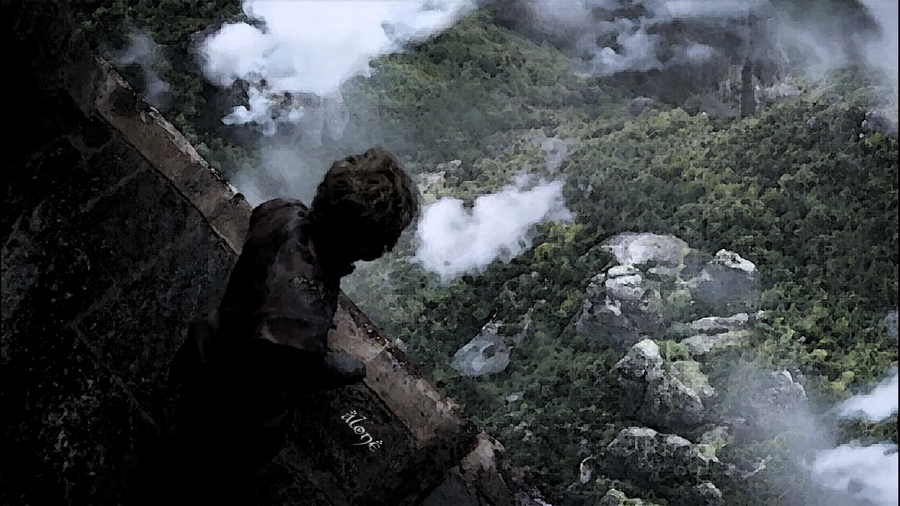 Tyrion continued to claim his innocence to Catelyn while surviving an attack from the Hill Tribesman, only to be thrown into a Vale chateau sky cell by the maladroit Mord.

Finally, Ned is confronted by Jaime Lannister regarding the capture of his brother, Tyrion (a fact that Ned learns earlier in the episode by Yoren). Ned tells Jaime that he ordered the arrest, which leads to a battle and Jory getting the business in his eye. As Ned and Jaime go at it, Ned is speared in the back of the leg by a guardsman consequently ending the encounter, as well as the episode.

“Your mother was a dumb whore with a fat ass. Did you know that?” -Robert

“An inspiring sight for the people, aye? Come bow before your King. Bow, you shits.” -Robert

“North or south, they sing no song for spiders.” –Varys

“Give me ten good men and some climbing spikes. I’ll impregnate the bitch.” -Bronn

Jory Cassel, a couple of minor characters defending Catelyn Stark en route to the Vale, a shitload of Hill Tribesman, and a horse whose head would be cryogenically frozen and later used as a prop in The Godfather.

Other Firsts: The episode included a couple of important mentions that viewers would not grasp the importance of until later in the series including that of Stannis Baratheon (during the Loras and Renly shave scene) and House Martell. It also included the first depiction of the Vale during the opening theme. 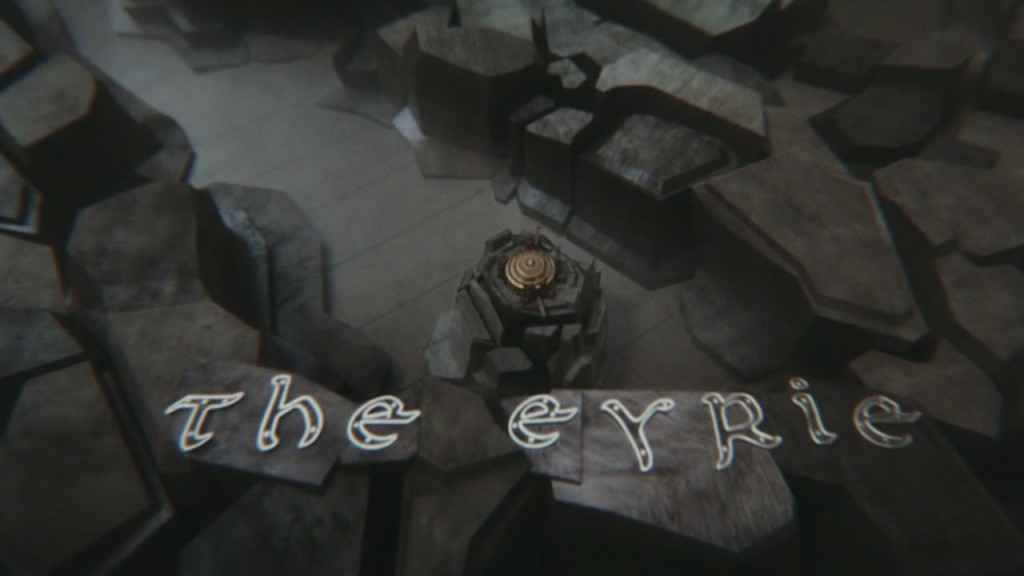 As you can imagine, the breastfeeding of Robin set off an exploding nipple of memes. 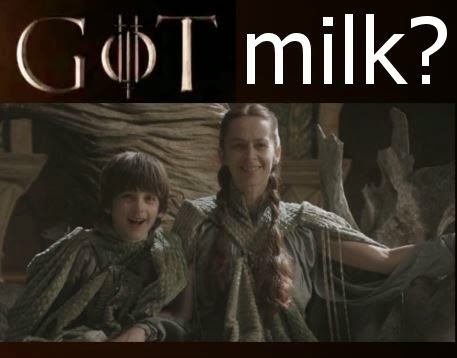 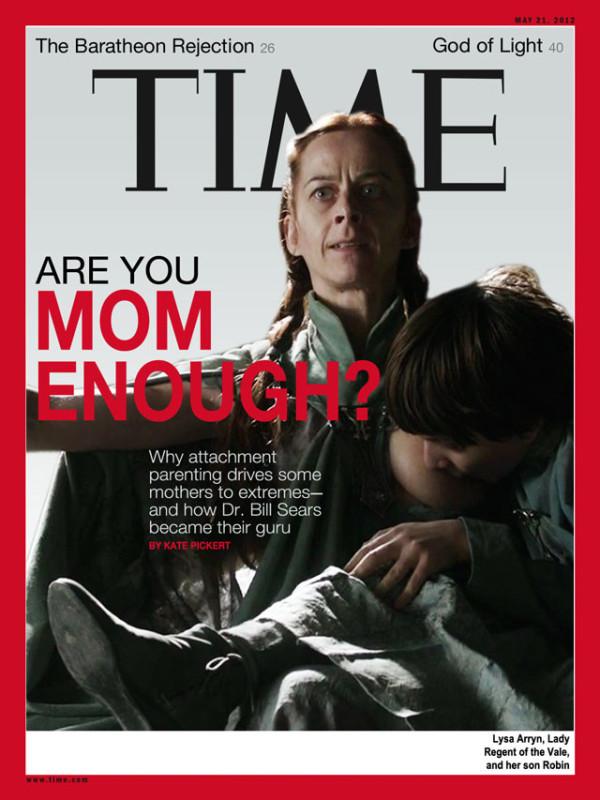 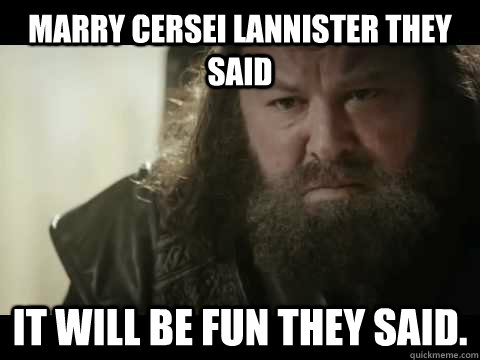 And the Beautiful Death for Jory Cassel. 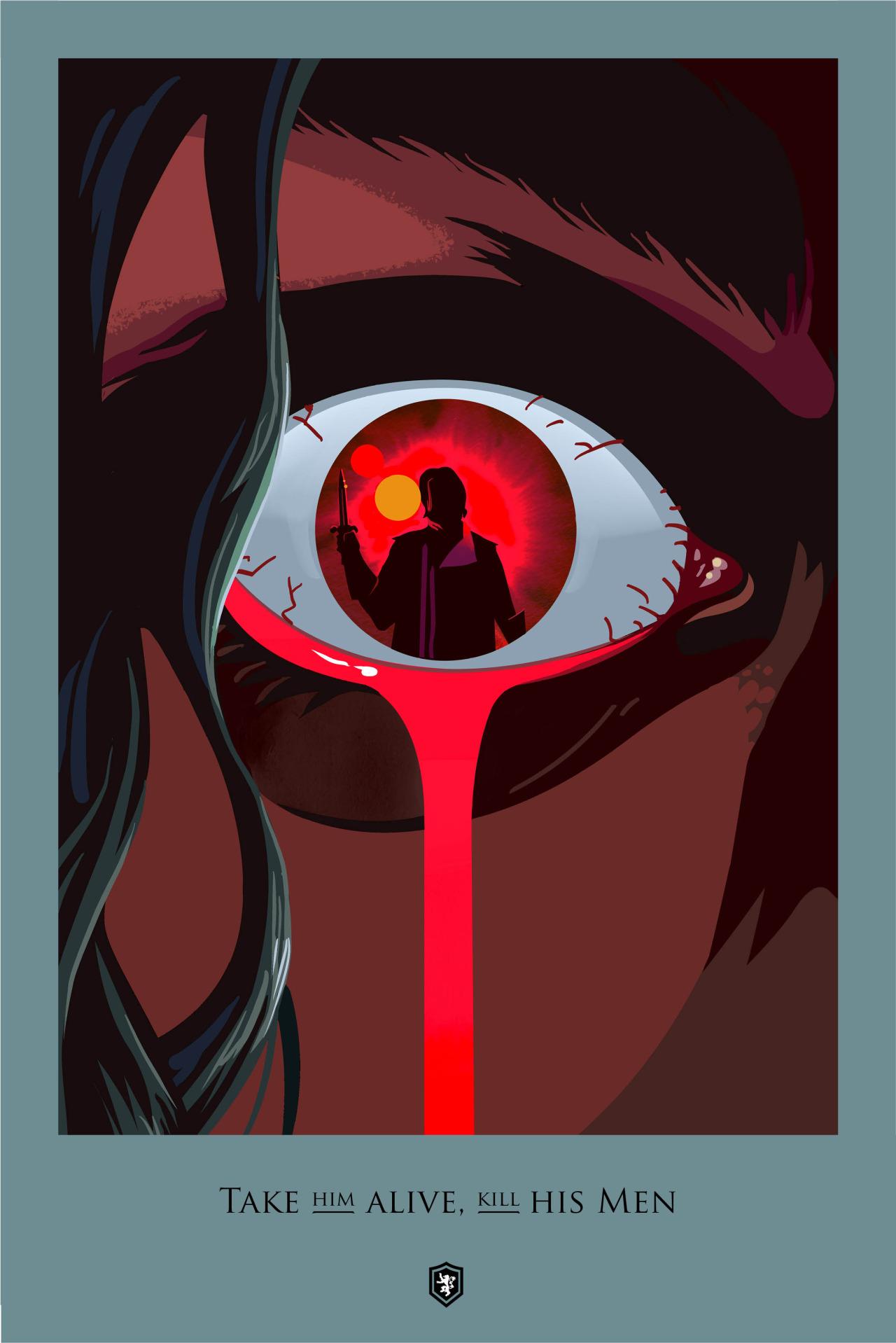 Thank you for strolling with a man down GoT memoir lane, even in the wake of the S6 trailer.

Don’t forget to check out Sue’s excellent review of 104: Cripples, Bastards and Broken Things from yesterday.

Tomorrow, the Notorious Nate Dogg brings you the remembrance of 106 as our march to the S6 premiere continues. Enjoy the ride, and may there always be peace in your realm.