Game of Thrones heads for Navarre and Peñíscola, and new casting info! | Watchers on the Wall | A Game of Thrones Community for Breaking News, Casting, and Commentary 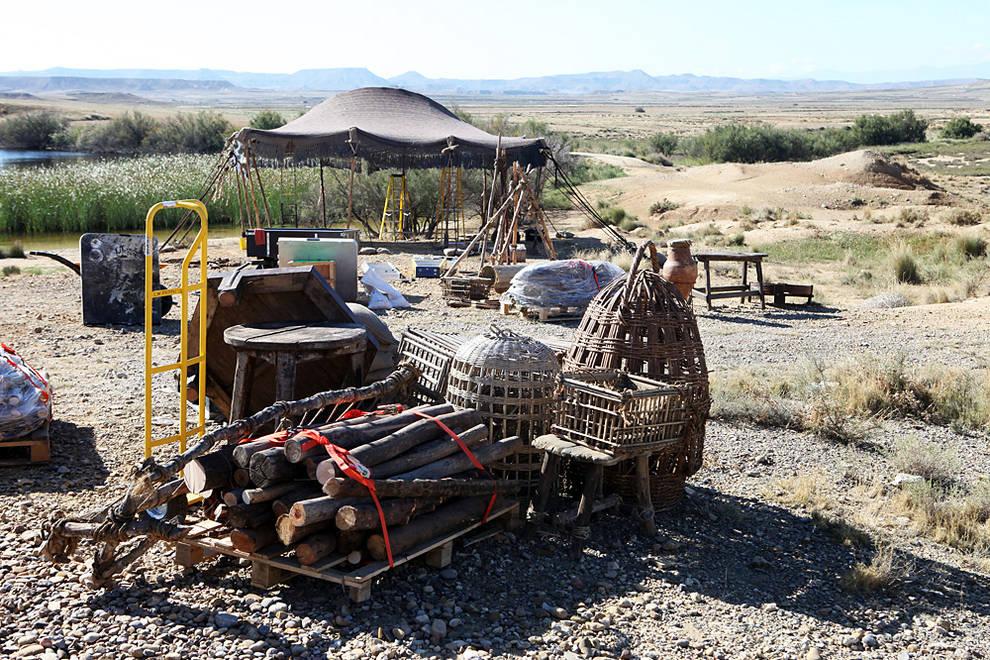 Preparations are underway in the Bardenas Reales Natural Park in Navarre, Spain, for season six of Game of Thrones. According to DiarioDeNavarra, workers are staging the area and putting out props (shown above), readying for the filming expected to start soon.

With the announcement of extras casting in July, we learned the likely dates for the Bardenas shoot. Extras were asked to be available for September 20-25th, and so, barring any major last-minute changes, we can assume that Game of Thrones will be filming in this area for the next several days.

The extras casting also provided big hints as to what we’ll be seeing in the Bardenas. The request for people (800 men and 400 women) of Mediterranean and darker coloring, with men willing to grow out their facial hair indicates the filming will be of Dothraki characters. We’re thinking these will include the characters Daenerys first met in the Game of Thrones season 5 finale.

There is no word yet whether Emilia Clarke will be joining the Dothraki extras in Navarre.

The first is a young widow.  Game of Thrones is looking for a non-white (preferably mixed or middle eastern) actress aged 18-22 to play the role. The widow is gentle and very bright, and has a great presence and appeal. She has a difficult personal history but it hasn’t made her cynical. She has a good-sized role in two episodes. The actress will be filming the weeks commencing October 12th and November 2nd.

Another role being cast is that of a young warrior, aged 20 – 25. The character is quirky, intelligent, and quick-witted. He is part of a warrior race but he’s unusual because he’s physically slight and short. The show is searching for a non-white actor as well for him, someone with light brown skin. He’s needed for filming for a week around October 9th.

Given the mentions of ‘warrior race,’ it seems most likely the young warrior is a Dothraki warrior. October 9th is around the scheduled beginning of filming in Almería.

The widow is intriguing; given her coloring we can guess she is in Essos, the show has been predictable in placing non-white people in Essos 99% of the time. Is this a Dothraki widow for Daenerys to befriend? It continues to be an interesting challenge, making guesses when we are off-book for so many storylines.

And of course, filming carries on in Saintfield, Northern Ireland, this weekend! Today, it’s smoky up in their neck of the woods:

Game of Thrones is also preparing in Peñíscola, where filming is expected to begin in early October. Levante reports that the extras in Peñiscola will be playing slaves, unsullied and nobles.

Thanks to Cami for the heads-up!