Game of Thrones casting for another season 6 female role | Watchers on the Wall | A Game of Thrones Community for Breaking News, Casting, and Commentary

Two weeks ago the Game of Thrones casting leak floodgates opened and now today we have more information for you fans hungry for season 6 news.

In addition to the dozen roles listed previously, Game of Thrones is now also on the hunt for an actress to play a very specific type. Since some viewers are particular about their spoilers, we’re going to tuck all this info below a cut.

According to the casting breakdown provided by our sources, the show is looking for a young woman approximately 18-22 years old of any ethnicity to play an “impactful role” in season 6. It’s noted that the part requires a lot of days filming between Oct. 14th and Dec. 7th. 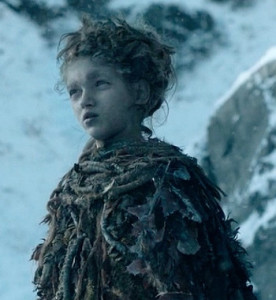 Season 4 Child of the Forest

Here’s where the role gets very specific: the actress needs to be very short – about 5 feet tall or shorter. They’re asking for “striking facial features,” eyes that are far apart if possible, and someone with a “child-like physique.” They need someone who is charismatic and has the ability to handle action scenes as well.

A description so exact screams Child of the Forest to us. We previously met the mysterious beings only briefly, when Bran and his party came across one just as they reached the Three-Eyed Raven’s cave in the season 4 finale.

The Child of the Forest we met then was played by young actress Octavia Alexandru. If the role being cast is a Child of the Forest, we don’t know if this new older actress is replacing Alexandru or playing a different character. It’s possible they wanted to take the Children in a different direction and cast someone older with more experience who is able to work more hours. Perhaps they will bring Alexandru back and and we will see several Children?

Bran Stark was stated to return in season 6 and if this is a Child casting, that would confirm that he is coming back on schedule.

What say you, readers- can you think of any more possibilities for this casting breakdown?