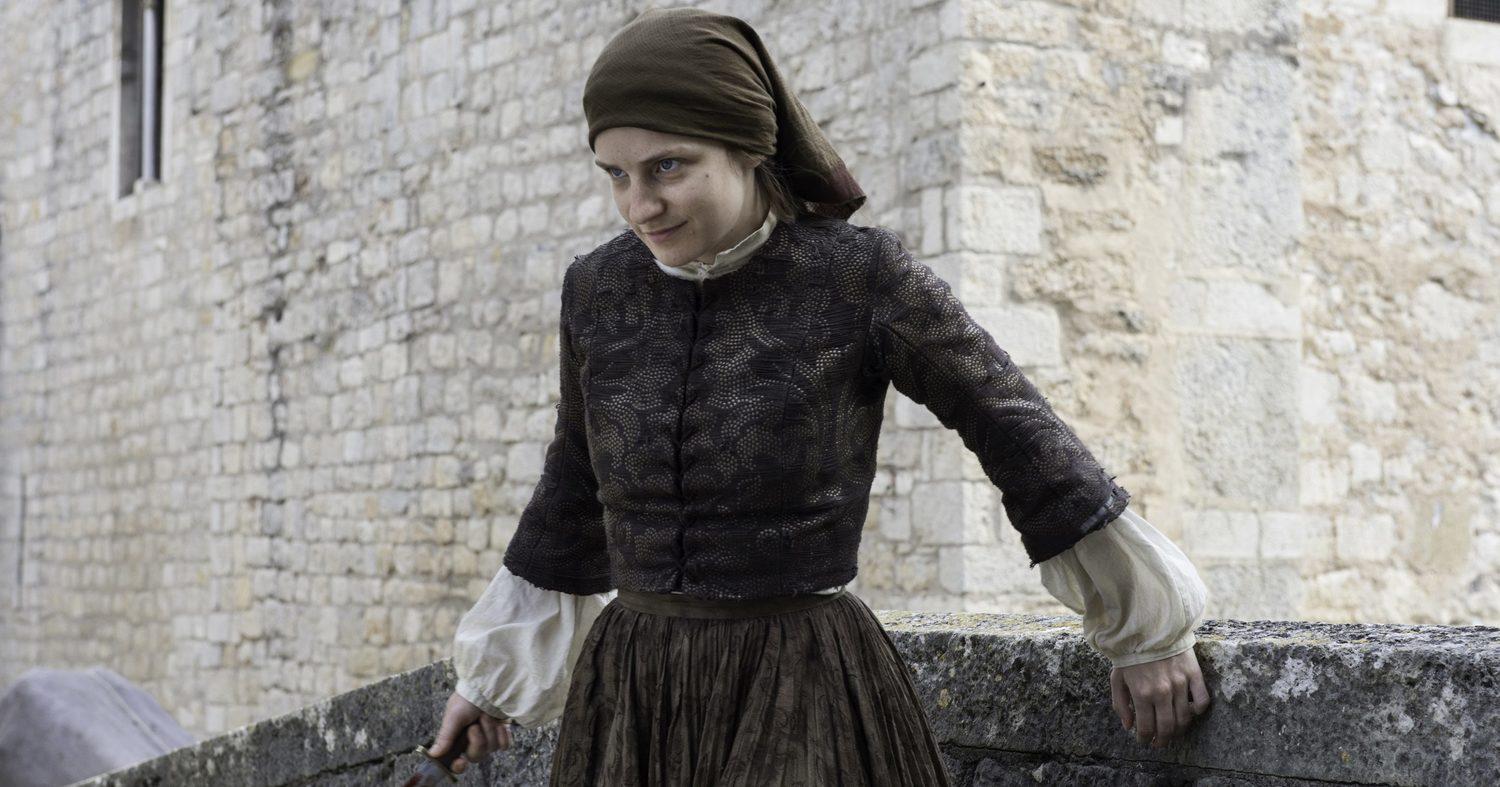 The Waif’s actress, Faye Marsay, and Game of Thrones episode 8 director Mark Mylod discuss the creative decisions behind some of the major plot developments in last week’s episode, “No One.”

In an interview with The Hollywood Reporter, Faye Marsay, who played the now-deceased Waif, said that, though she’s sad to be off the show, she’s very pleased with how the Waif’s storyline concluded. “I’m rooting for Arya and Maisie as well. Even though I won’t be able to hang out with everyone again, I think it was done right and done properly. I think Arya deserved to rip off her face and stick it on a wall.”

She discussed the Waif’s backstory, or lack thereof, and her character’s psychology.

“[The Waif’s backstory is] not discussed. I thought it would be a good idea to just play her very present. I wanted to be as mean as possible. I wanted the character to have a dislike towards Arya, and not have much else around it … In my opinion, it wasn’t so much jealousy [that motivated her]. It’s that the Waif has a very one-track mind, and that’s getting the job done, and doing it right and doing it quick. I know it ended pretty nasty … but I think it was easier because I had one objective: ‘I don’t like this girl, and I’m going to do everything I can to teach her a lesson and destroy her.'” 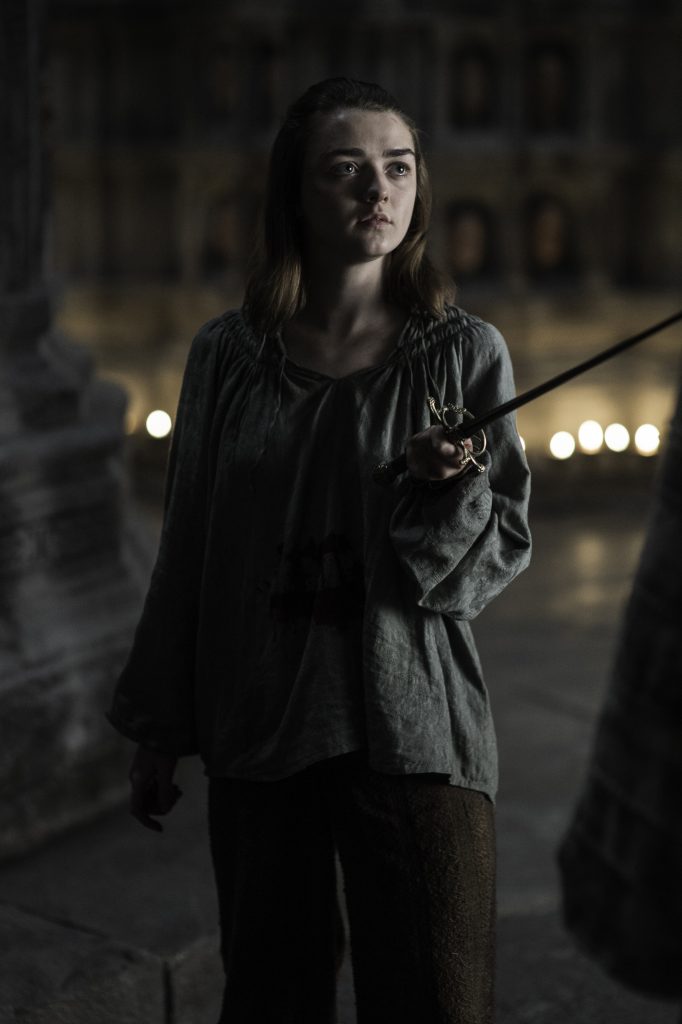 Marsay also addressed the fan response to episode 8. She said the (now debunked) fan theory that Arya and the Waif were the same person was “very well thought out. Whoever came up with it, that was a pretty cool idea” and acknowledged that the Waif does disobey Jaqen’s order to kill Arya quickly and painlessly.

“She does go against Jaqen a little bit,” she said. “She makes Arya suffer and bleed out. I guess…I guess that’s a little bit of revenge on the Waif’s part, right?”

She also admitted to The Wall Street Journal that it would have been “nice” to actually see the final showdown between Arya and the Waif, but pointed out that sometimes drama is more powerful when things are left to the imagination.

“I did like how it left the audience to envisage the brutality and how Arya chose to do this … She managed to wrestle this woman, who happens to be a top-grade assassin, if I do say so myself, and she kicked her ass and ripped her face off. That’s cool, man.”

Mark Mylod, the director of “No One,” also weighed in on the decision not to show the Waif’s demise, telling IGN that he felt that it was dramatically satisfying for Arya’s time spent blind to be what gives her the final advantage over the Waif.

“That was a setup from the first episode of this season, and suddenly it comes to fruition eight episodes later … and of course, when the character dies in the dark, unless we switch on night-vision goggles, we’re not going to be able to see that, and we’re not going to stick around to hear a scream in the dark anyway,” he said. 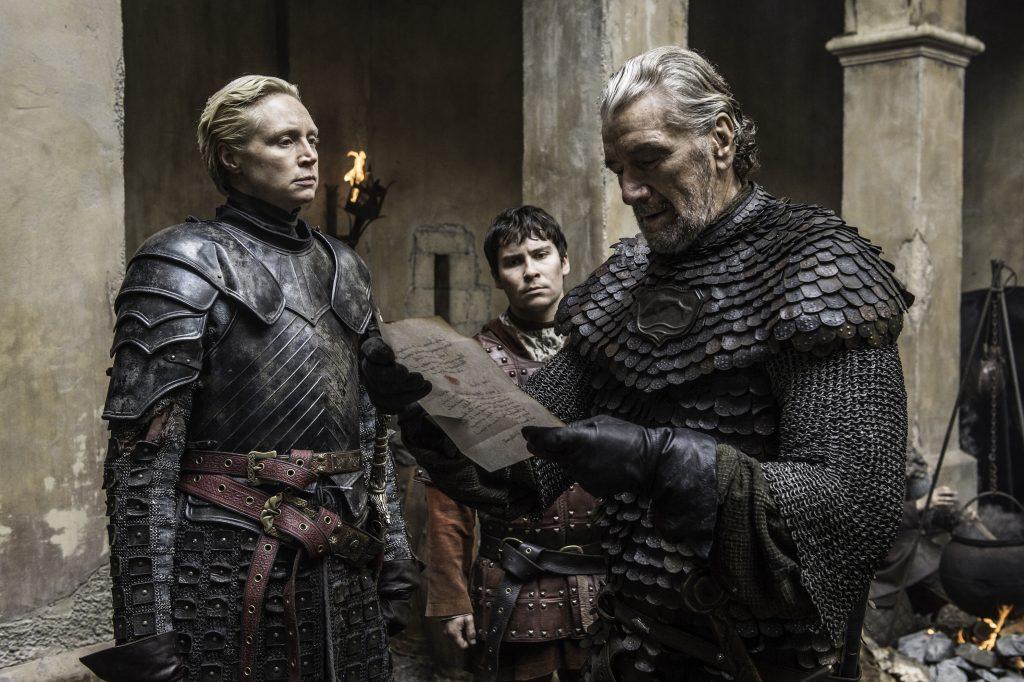 He also addressed the controversial decision not to depict Brynden “The Blackfish” Tully ‘s death, either. He said it was a carefully made decision to make the Blackfish’s final scene his conversation with Brienne.

“The emotional focus was really about the final moments between him and Brienne — two warriors, two samurais, facing each other — and Brienne’s acknowledgment that this fellow samurai has chosen his moment, and this is his moment of dignity and choice of his death. So it was really about that moment of choice and the dignity and acceptance between these two great warriors, rather than the actual detail of his actual death. That was actually a tonal choice as to how we saw that character.”

He talked to The Washington Post about Arya’s less-than-vigilant behavior at the end of episode 7 that inspired fan theories that the girl we saw booking passage to Westeros wasn’t really Arya. According to Mylod, Arya’s laid-back demeanor was a simple mistake on her part. 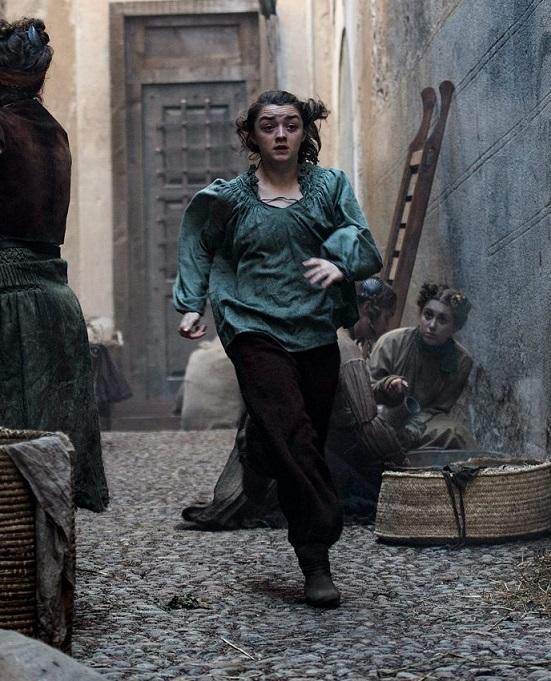 “She lets her guard down,” he said. “We forget how young this kid is, and she makes a mistake. This is in my head, at least. Having booked passage with the captain, she has a moment of reverie where she’s looking over Braavos and particularly looking forward to making a move toward home to a new adventure. She’s not going to be this assassin, and she lets her guard down and nearly pays for it with her life.”

He explained to The Hollywood Reporter that his primary focus in constructing that final sequence between Arya and the Waif was to convince audiences that this really could be it for Arya.

“We wanted to sell that misdirect as convincingly as possible. Arya is one of my favorite characters, and I wanted everyone watching the episode to think, ‘Oh shit. Arya’s going to die. She’s really going to die.’ I wanted them dreading that, to be on the edge of the couch.”

Lastly, Making Game of Thrones has posted a storyboard of the chase scene between Arya and the Waif. Check it out below. 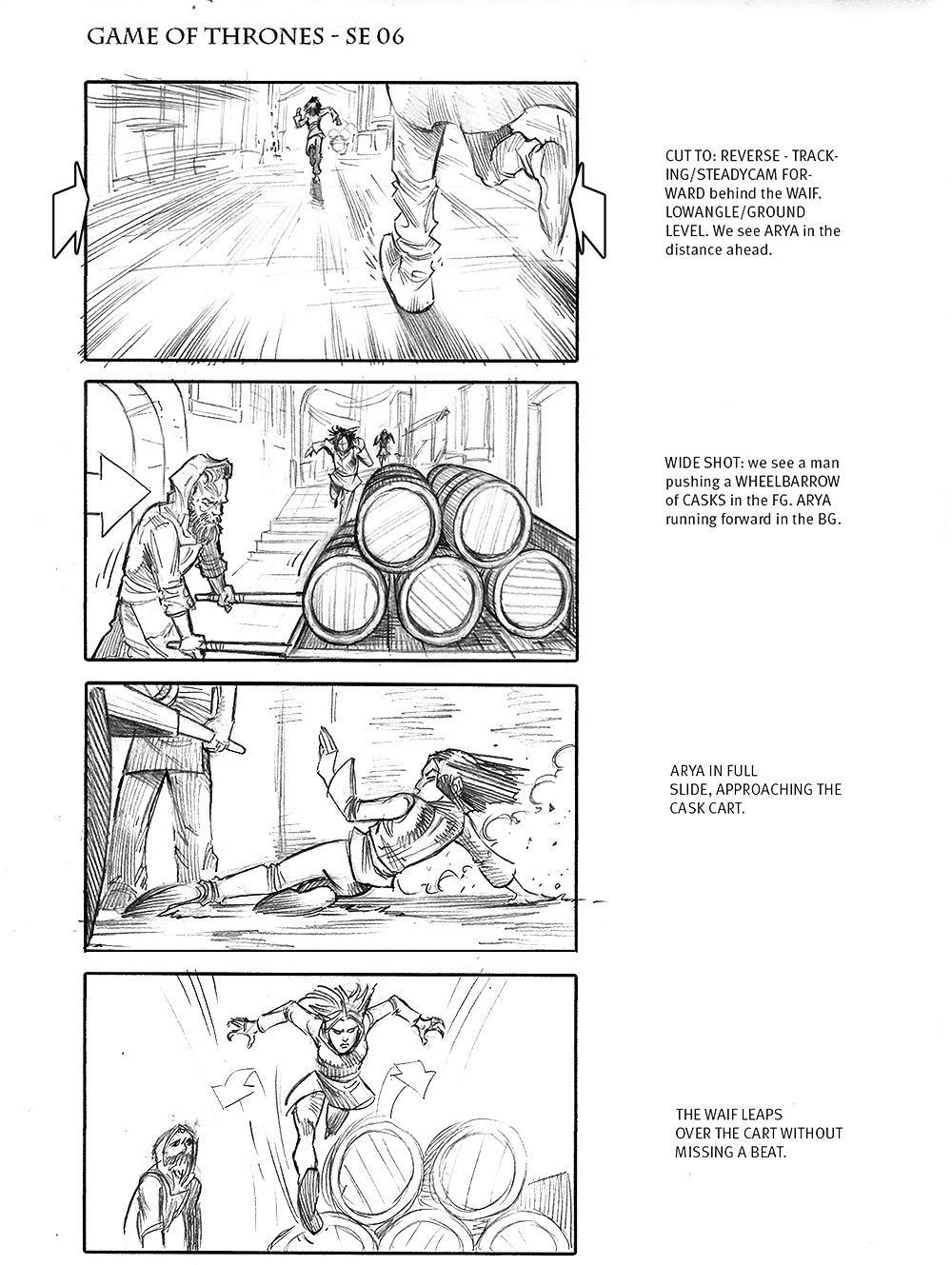 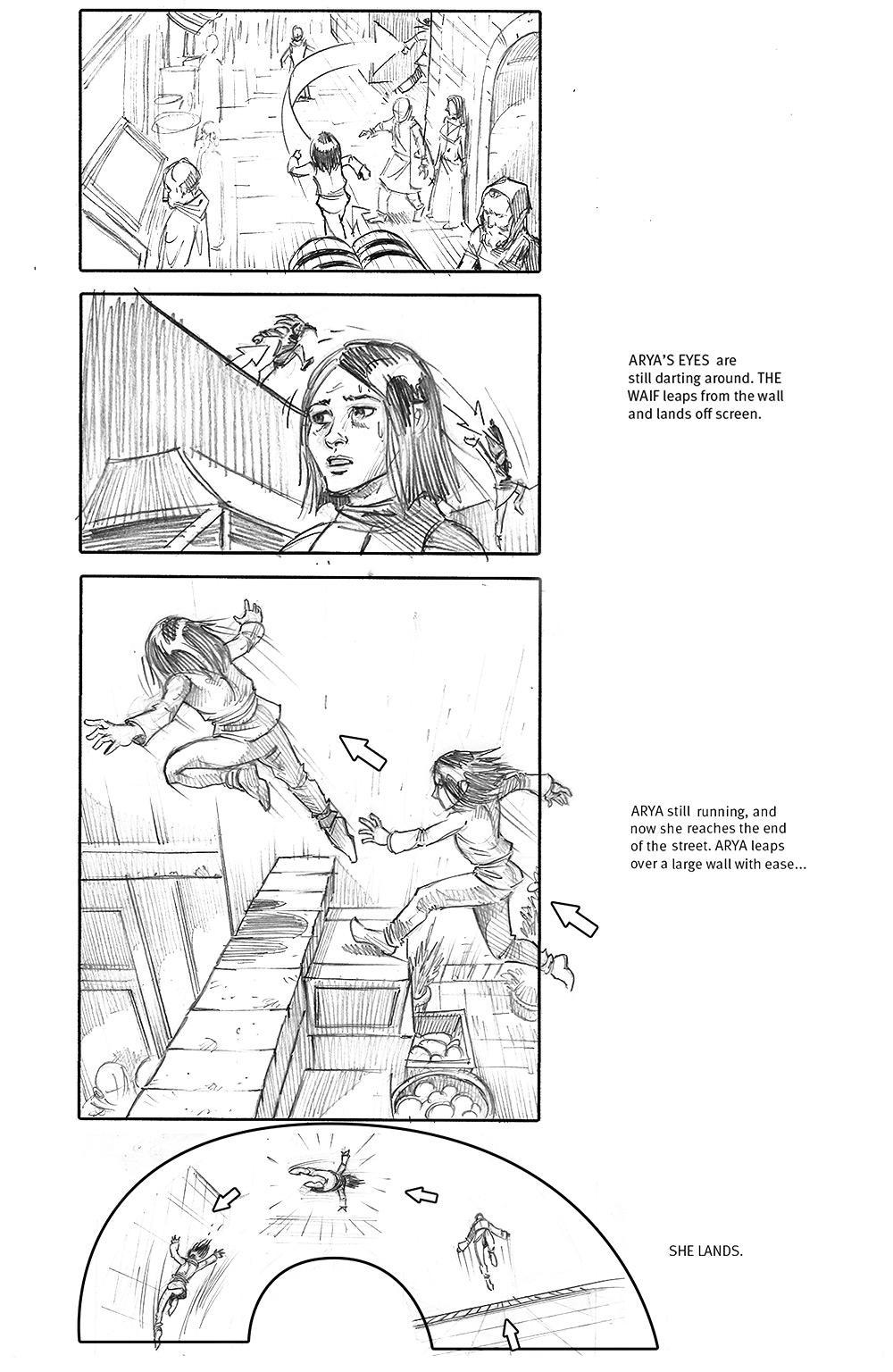 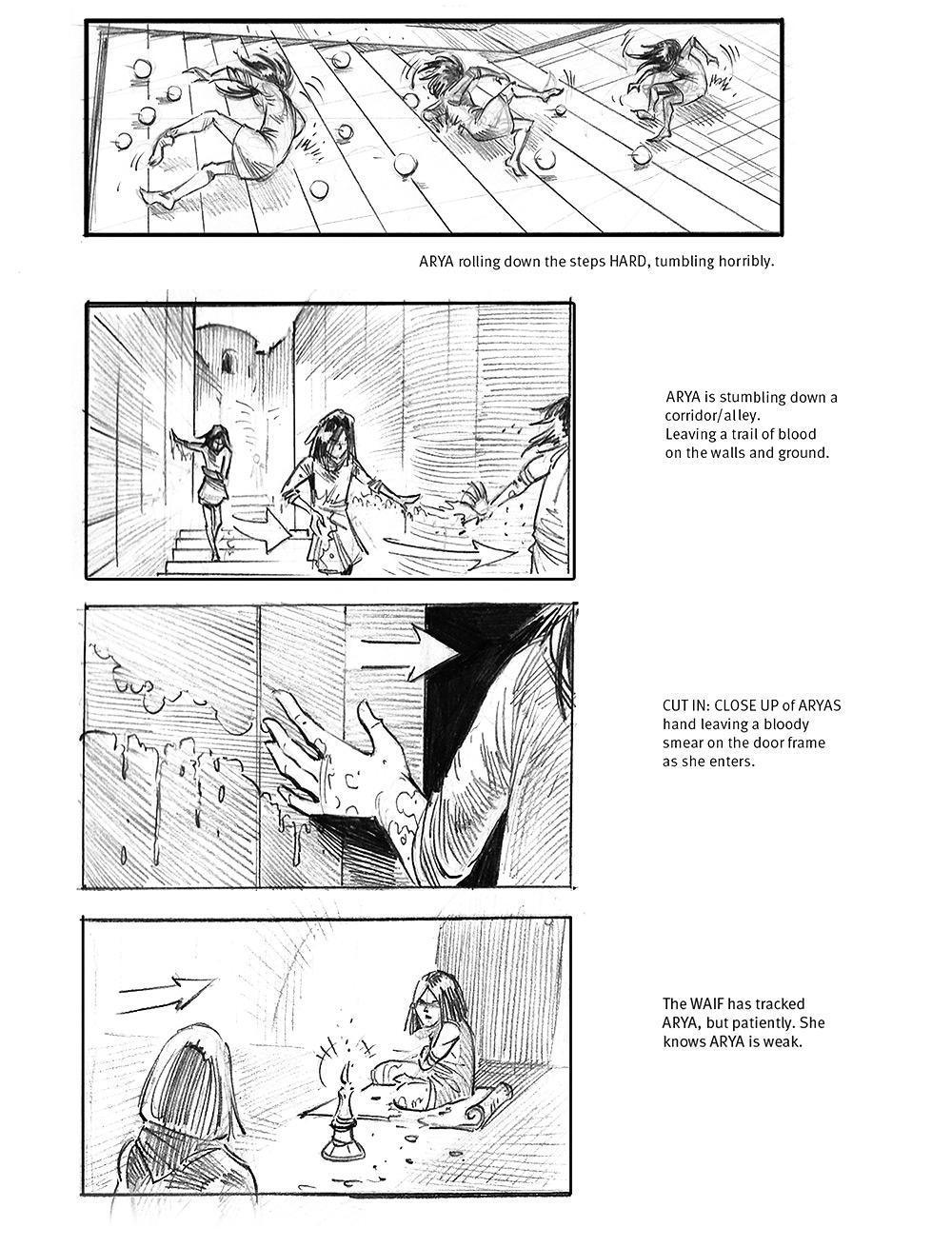