Fandom-Wide Survey Ratings for Game of Thrones, Part 3: Justifiable Homicide? | Watchers on the Wall | A Game of Thrones Community for Breaking News, Casting, and Commentary 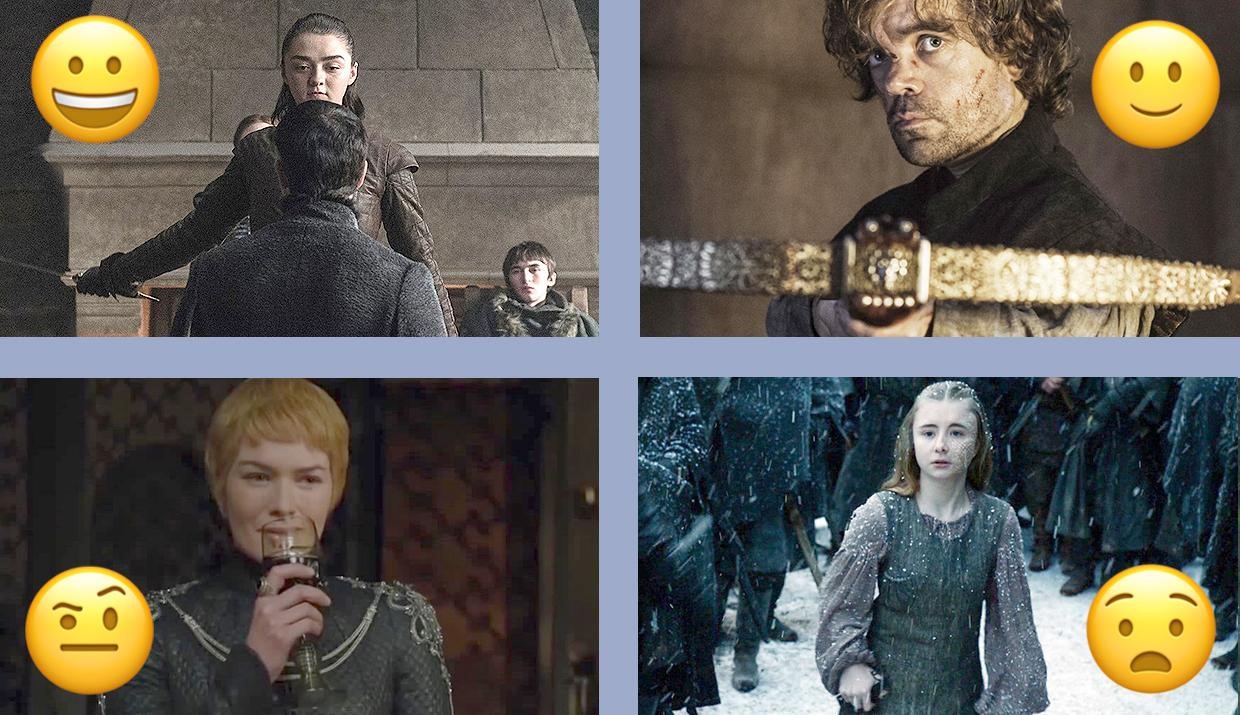 We’re onto Part 3 of our Game of Thrones survey results, in which we learn that of two formerly Essos-dwelling female characters, only one’s lethal acts are consistently seen as justified.

We’ll review nearly four dozen events on the show – various beheadings, imprisonments and mass killings – to see which got a nod of moral approval from respondents. On a different topic entirely, we’ll see which houses are most favored.

For Part 1 of the survey results, which includes survey basics and ratings of plot elements and seasons (and were presented at Con of Thrones last month), click here. Part 2, which has ratings regarding characters, is available here. Part 4 is yet to come!

We asked respondents the following:

“Below is a list of certain plot developments. For each, please choose how justified you feel the action taken was (as opposed to how justified the character taking the action felt). Please consider mainly the show depiction, if you also have read the books.”

Per usual, we had a five-point scale ranging from Very Unjustified (1) to Very Justified (5).

We listed 45 actions/events – nearly all of them involving attempted or successful murder – presented in three relatively random groups of 15. The three groups showed up in a random order, as did the 15 events within each of them. The actions were phrased in “active voice” as much as possible (example: “Olenna poisons Joffrey,” not “Joffrey is poisoned”) so it was clear who was performing the action/event. 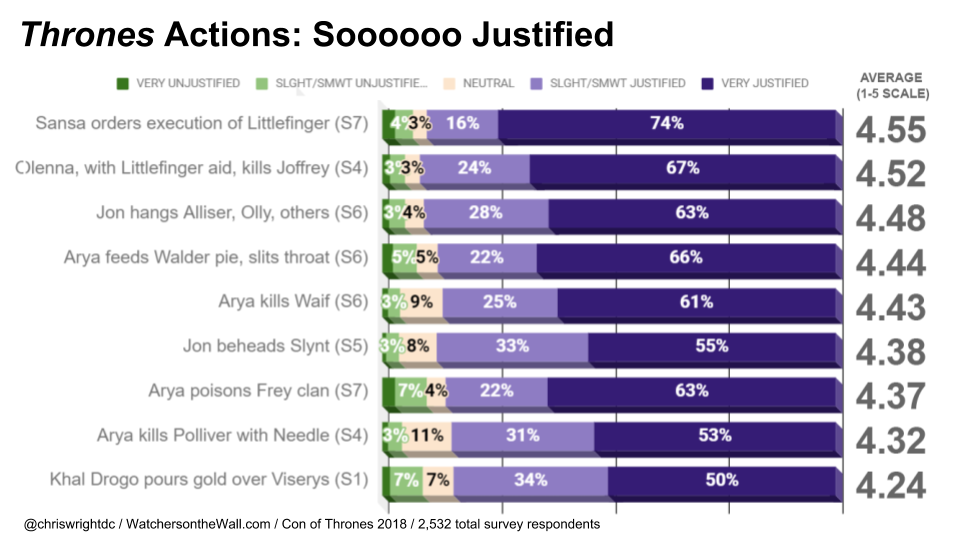 There’s a lot of Arya way up here; respondents were largely OK with her actions. Of course, many of them have been “rah rah” retributive moments.

Here’s the second group of nine. 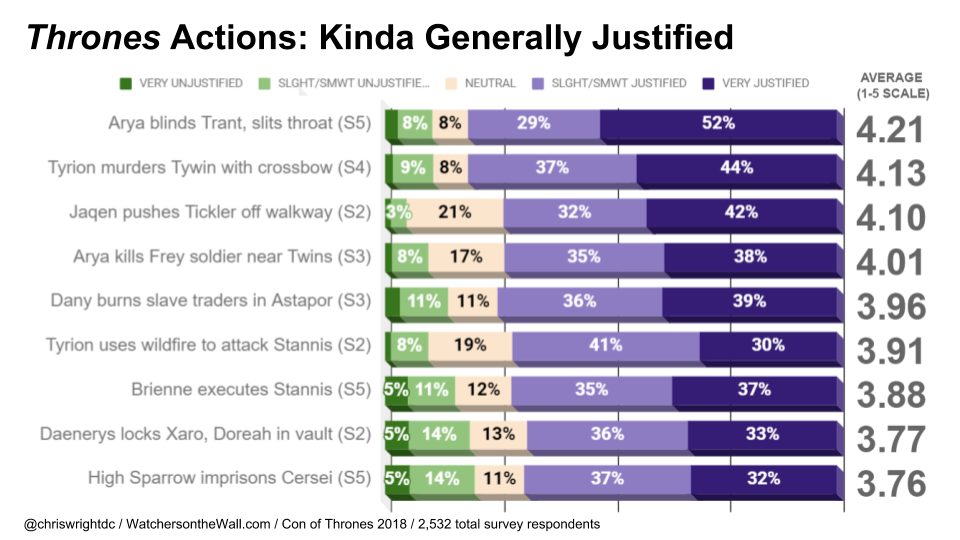 To be clear, just because one found an action justified doesn’t mean they were pleased with the end result. For instance, as shown above, more than two-thirds of respondents said Tyrion’s use of wildfire during the Blackwater battle was justified. But as shown back in Part 1 of our results, only a third were pleased that Stannis lost that battle.

And the middle group of nine, though all but one fell on the “justified” side, however slightly. 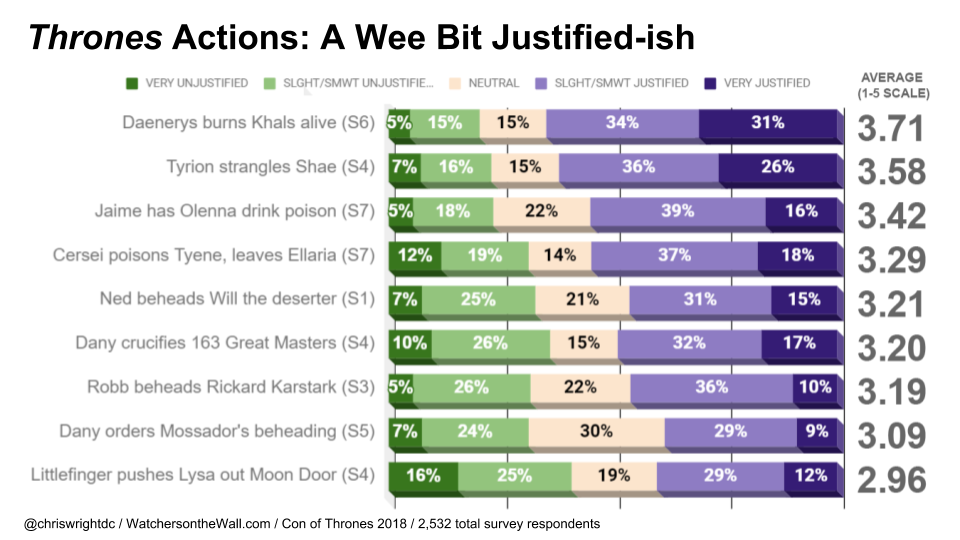 Here we have three beheadings rated very closely together (those of Will, Rickard Karstark and Mossador), and also very close to neutral. What, if anything, does that say about the moral universe, and justice system, on Thrones?

Our second to last grouping… 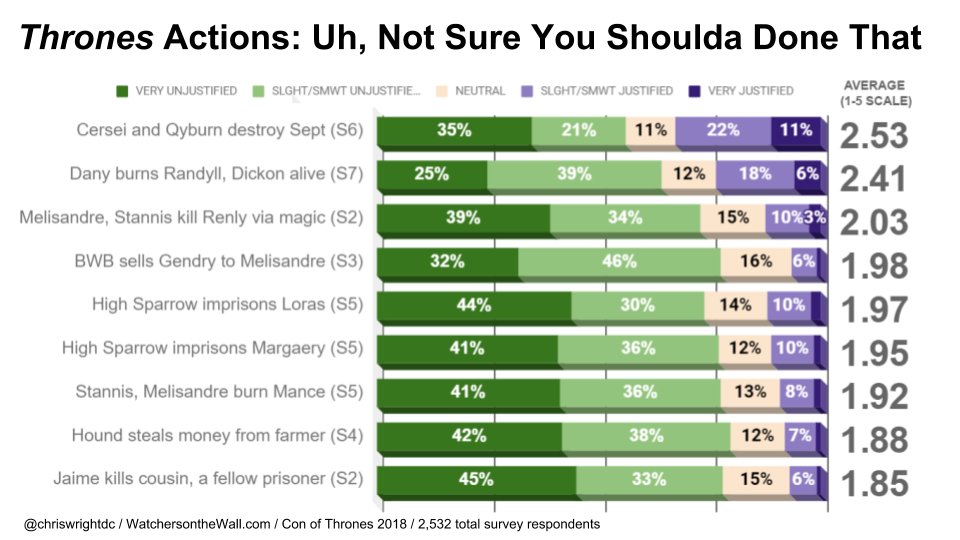 I was pleased from a data-validity standpoint that the High Sparrow’s related arrests of Loras and Margaery, despite their being in different groups (remember these were split into three groups of 15), wound up with nearly identical scores. We also have three actions involving Melisandre rated relatively closely together. Though there’s one more that is rated much lower…

And the final one. 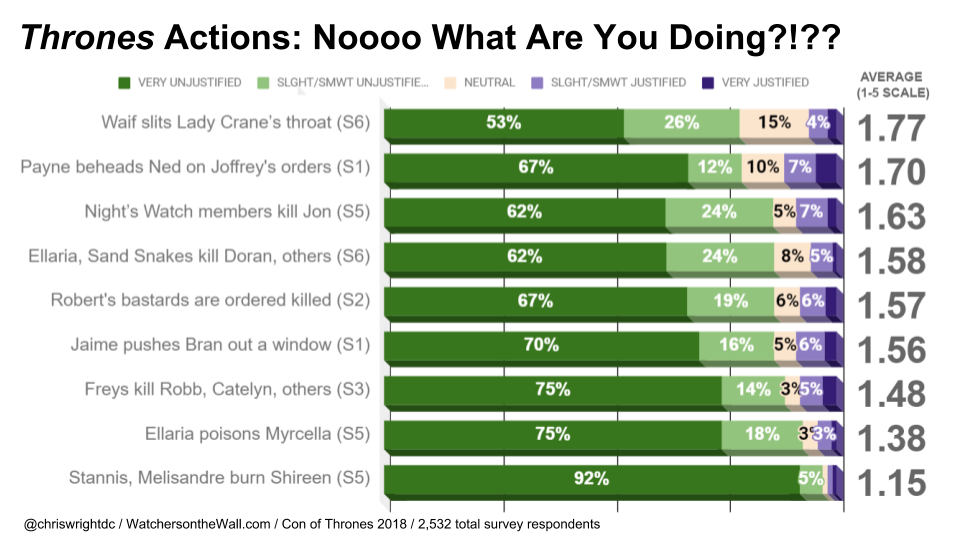 To paraphrase Petra in an earlier article, it’s not surprising that the murder of children would be seen as very unjustified. Though I wonder: Suppose Stannis had defeated Ramsay at Winterfell, even taken over that northern capital. Would the burning of Shireen have been seen as more justified?

Petra: It’s interesting that the most-justified action wasn’t committed by an unambiguous fan favorite, like Jon, but by Sansa, who was among the top favorite and least favorite characters (see Part 2). Fans are able to acknowledge that her action was justified even if some of them also don’t like her as a character.

(Note: I included it for the record, but the “Robert’s bastards are ordered killed” item was not asked clearly on the survey; the question said Joffrey had ordered them killed. That’s in the show only. In the books, it was Cersei.)

Speaking of killing people, two female characters who do a fair amount of that are heading in opposite directions when it comes to their actions’ justifiability, according to our results. Here are results, on the one to five scale, regarding actions Arya and Dany have taken over the years. 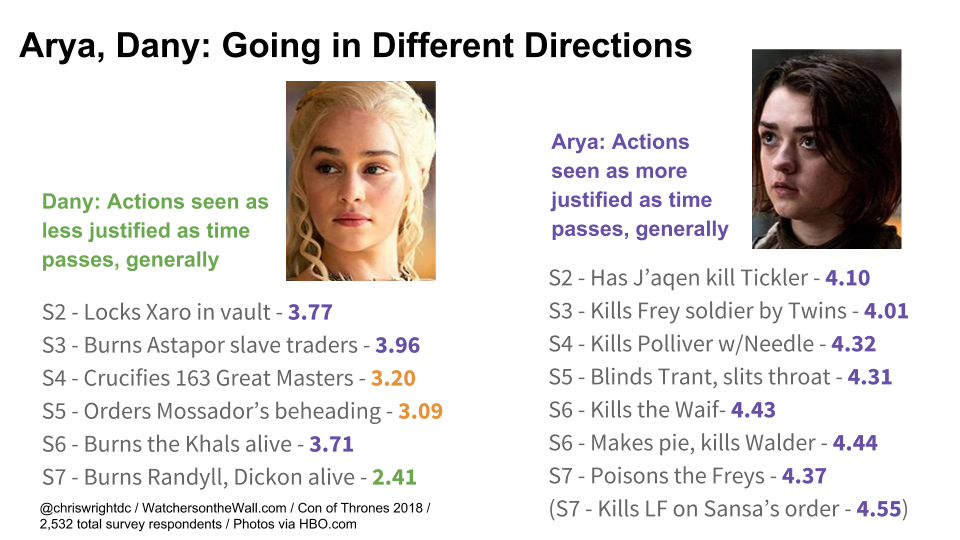 Arya’s acts, which are generally more retributive in nature, are seen as more justified, with each scoring at least a 4.0 out of 5. Dany’s results hew closer to a 3.0 neutral score.

Petra: I can’t help but cite sexism as one reason why Daenerys’ actions have grown increasingly unjustified in their perception (my views on her character are complicated, but I don’t want to get sidetracked). But I’m forced to check my assumptions as Daenerys’ declining justified ratings contrast with Arya’s rising ones. It’s odd that they have changed, because their motivations and methodology haven’t. Perhaps it’s the changing context: watching Arya grow in independence and agency makes it hard not to root for her when she defeats adversaries, yet seeing Daenerys’ rise in power makes it a little … scarier when she uses that power to take out her enemies.

In Part 1 we explained the three “viewer types” – those who read at least one book before seeing the show; those who were exposed to the show, then decided to try the books; and those who’ve never read the books (either because of an edict from Sue the Fury or not). Let’s see how their opinions varied, or didn’t, for the above 45 actions.

For simplicity’s sake, we’re showing only either “justified” or “unjustified” stats below, whichever had the bigger difference (remember, neutral was a category too). We’ve lumped together the “very” and “slightly/somewhat” responses from above.

First up, here’s actions involving Dany or Arya. Those of you less into data dumps should keep an eye out for the red bars, which note actions with at least a nine-point difference across the groups. 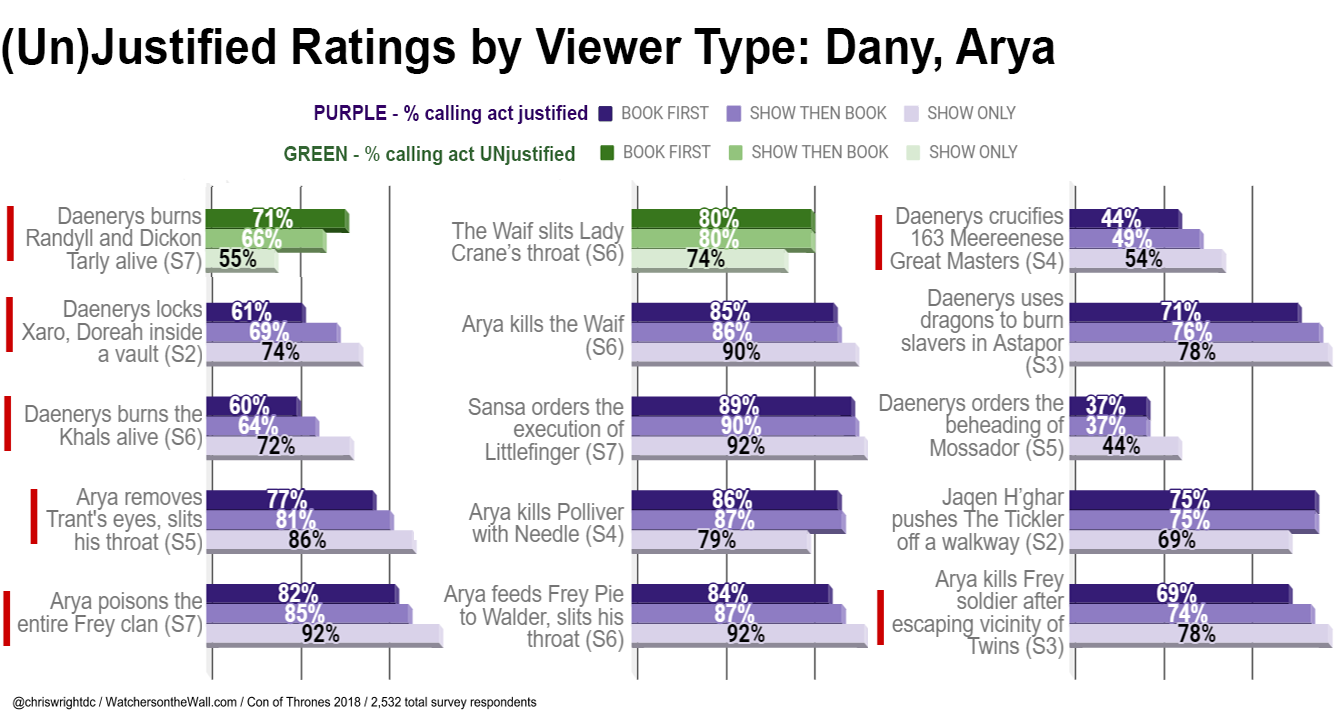 The killing of the Tarlys registered the biggest split among all 45 events – a striking 16-point difference. And when there are big differences, it’s the show-only viewers seeing actions as more justified or less unjustified. The only exception above is Arya’s murder of Polliver, which book readers were more down with. Why would that reaction be different? 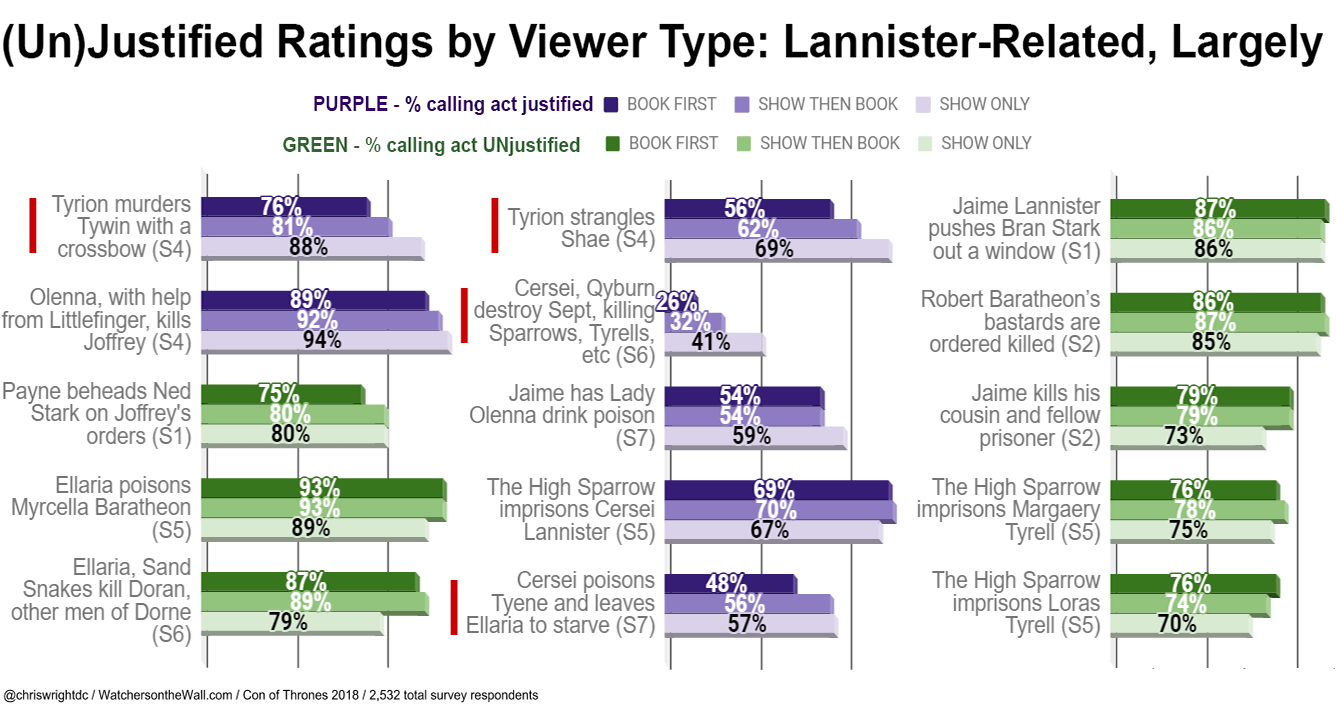 Tyrion’s twin slayings at the end of Season 4 engender differing reactions by nearly the same margin (12 points for Tywin, 13 for Shae), as do a couple of Cersei’s endeavors, be they mass slaughter or a simple poisoning. At least three of the four can be seen as retributive; again, I wonder why it’s vengeful events that seem to result in differences between book readers and show-onlys. (Meanwhile, though the difference is only five points, book-first respondents were less likely to find Ned’s beheading unjustified.) 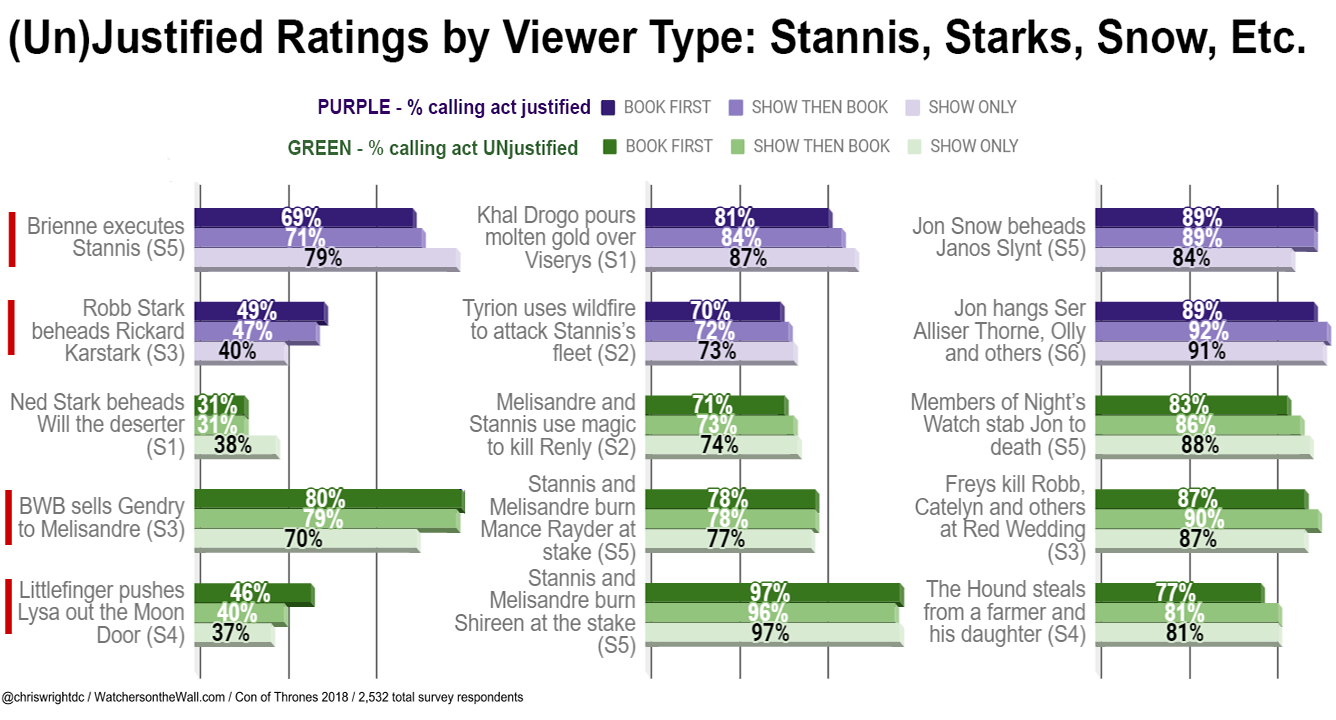 In this group is the only event that book-firsts more saw as justified by a big margin: Robb’s beheading of Rickard Karstark. Just below it we see something similar with Ned beheading Will, though by only seven points, and at top right, Jon beheading Janos, by five points. Do book readers more approve of the Westerosi justice system than show-onlys? Or do they just like seeing northerners cut off others’ heads?

Elsewhere in the survey, we asked a question involving the undergirding of the early seasons and, in a sort of mock public opinion poll, probed for attitudes about varied Westerosi organizations.

The War of the Five Kings was the backdrop for the early seasons of Thrones, made clear by the cruel lampoonery at the center of the Joffrey-Margaery nuptials. We asked respondents to rank their preferred winner, from most preferred to least. These were the results. The number at right was the character’s average rank, with 1.00 being the best possible score (one only attainable if virtually every respondent ranked them 1st).

Petra: No surprises here. Efficacy at leading was a little ambiguous for all five kings (we could have a looong conversation about that) but in terms of likability, Robb and Renly are the obvious winners and Joffrey was guaranteed to be at the bottom.

We also asked respondents to rank ten great, or at least greatish, houses from favorite to least favorite. These were those results. The number at right is, as above, the average ranking.

Petra: Ranking houses is tricky because, well, what are you assessing? Their words? Their sigil? The likability of each individual member can vary wildly. Is it the house’s overall feel? Or perhaps the likeability of certain iconic members tints people’s view of the whole family. The Starks were/are all pretty likable, so their place at No. 1 is understandable. But the Targaryens’ rank may be due to the popularity of individual members – Daenerys and Egg, for instance – rather than an overall belief that they make the best leaders.

“Below are ‘Houses’ and groups or other institutions that appear on the show and in the books. What is your overall opinion of each?”

This had, you guessed it, a five-point scale, going from Very Negative to Very Positive. And keep in mind, as we’ve seen elsewhere in this survey, something can be a “favorite” even if folks have a negative opinion of it (see Lannister, Cersei, on the good/evil and favorite character lists). 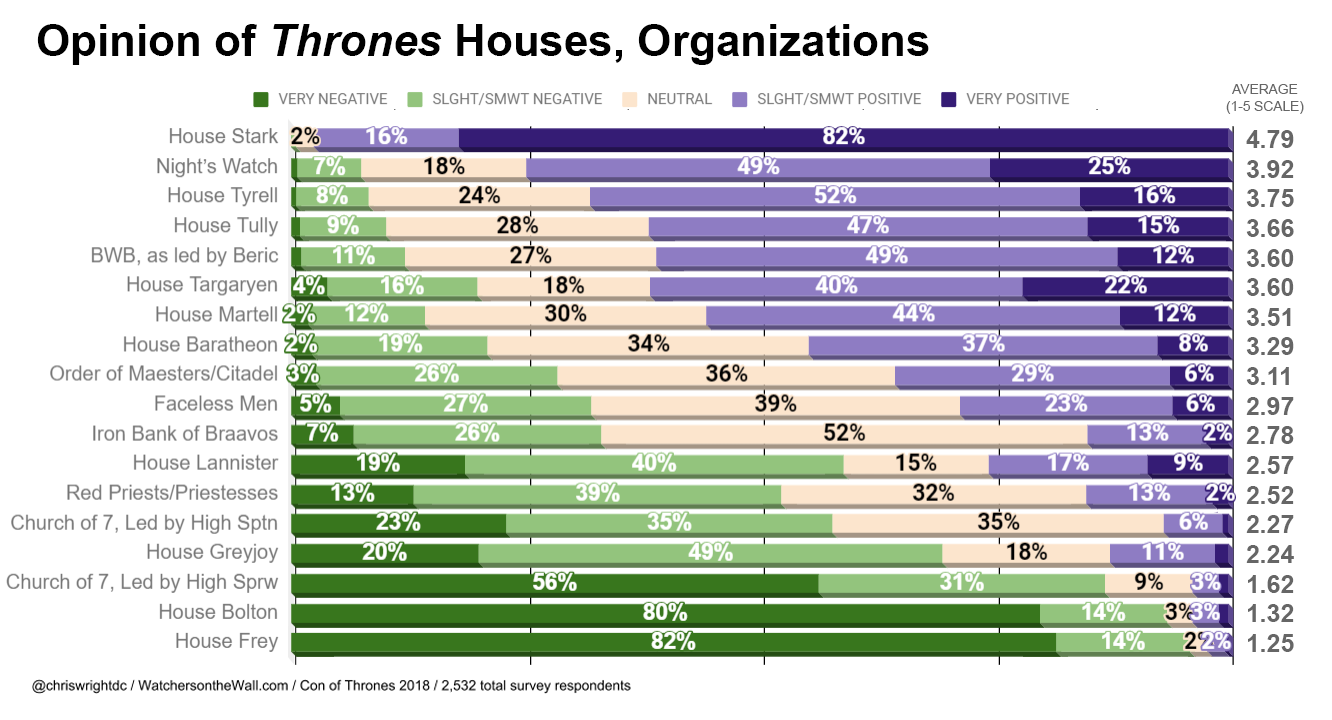 Note that, despite being No.2 in the 1-to-10 rankings above, House Targaryen has the fourth-most-positive image, with the Tyrells and Tullys above it.

Whew. That’s three sets of results down, one to go. We’ll be back with episode ratings (Hint: The bottom five episodes are all from the same season; another season of the show placed three episodes in the top ten) and more!