Emilia Clarke makes the rounds on late-night and morning shows, talks Daenerys Halloween costumes and the infamous coffee cup | Watchers on the Wall | A Game of Thrones Community for Breaking News, Casting, and Commentary 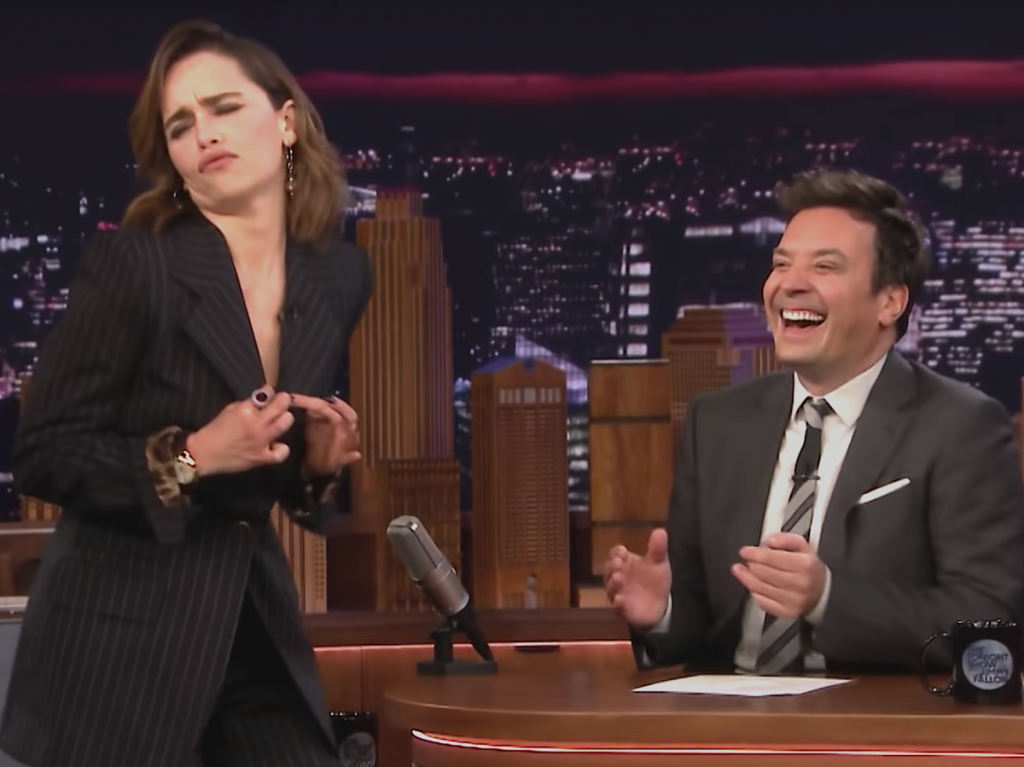 Emilia Clarke does her best impression of Kit Harington’s dance moves on an Oct. 30 appearance on “The Tonight Show.”

Oh, Emilia Clarke…your most famous character may have gotten a lousy death (don’t @ me), but you’re always such a joy to watch in interviews! Fortunately for us, it’s something she’s been doing a lot of lately as she makes the press rounds for her upcoming holiday rom-com, Last Christmas.

On the morning of Oct. 30, Clarke appeared on Good Morning America, where she was asked what it’s like to know that a character she made so famous is still a popular choice for Halloween costumes. Clarke said that since Halloween isn’t celebrated “quite the same way” in the UK as it is in America and she hasn’t seen many Daenerys costumes in person, “if I saw myself on the street, I’d probably run.”

That same night in an appearance on The Tonight Show Starring Jimmy Fallon, Clarke seemingly solved the mystery of who left the infamous coffee cup on the table during Season 8’s Episode 4, “The Last of the Starks” — a major gaffe that Sophie Turner tried to pin on Clarke on an appearance on Fallon’s show in May. Clarke refuted this, instead placing the blame on none other than the Spider himself, Conleth Hill.

“‘Emilia, I’ve gotta tell you something, love — the coffee cup was mine!'” Clarke told Fallon, relating what Hill apparently told her at an Emmys after-party this year. He apparently confessed to the whole thing, also apologizing for letting everyone think it was hers.

.@EmiliaClarke reveals once and for all who the real #GameofThrones coffee cup culprit is! More with @EmiliaClarke on #FallonTonight! pic.twitter.com/4T8AKiqIQO

Mystery solved, or at least until Hill disputes this account? He’s already betrayed his queen once, though — who’s to say he won’t throw her under the bus a second time? Later in the interview Clarke also does a wonderfully spot-on imitation of Kit Harington‘s “poncey” (read: somewhat douchey) dance moves and Jason Momoa‘s haka-inspired ones; the whole interview is only about five minutes long and very worth your time.

Lastly, in a interview alongside Last Christmas co-star Henry Golding, Clarke touched on the “epic” Game of Thrones cast reunion at this year’s Emmys, singer Camilla Cabello bending the knee (yes, really) and relating to her Last Christmas character, Kate, and her health issues.

If you’re interested, Last Christmas arrives in theaters on Nov. 8, — and in the meantime, you can amuse yourself with all three of these clips!