Emilia Clarke is back to work this week, on the set of Game of Thrones. The actress shared this bewigged photo of herself, with Daenerys’ hair. It’s not clear where she is in the hairstyling process, whether she’ll wind up with a more ornate style or if Dany is having a rough time with the Dothraki she encountered at the end of season 5. But according to Clarke’s hashtag, “Good hair days are here again.”

According to the Facebook page of Modexpor International, Game of Thrones is searching for a baby in Canet de Mar, Spain for September 16-18th. (Modexpor handles the casting for extras and these minor roles for GoT in Spain.)

The child needs to be 9 to 12 months old and blond/fair-haired, according to the casting call. With this specific description and location, I think this points to one particular baby we’ve already encountered- a fair-haired baby of this age is most likely Gilly’s baby Sam. 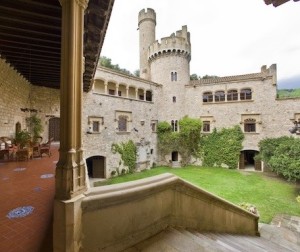 Canet de Mar is the home of the Castell de Santa Florentina, the medieval castle that has been the subject of speculation since it was confirmed as a season 6 location.  Baby Sam in Canet de Mar presents a strong likelihood that Castell de Santa Florentina is Horn Hill, the Tarly family home. We know from casting breakdown spoilers that we’ll be meeting Samwell Tarly’s parents and siblings in season 6, so it seems likely he and Gilly will stop by Horn Hill on the way south to Oldtown.

Modexpor has another casting call today- they’re searching for young Girona locals to take part in filming September 9,10 and 11th.

In particular they’re looking for people who are around 16 years old: girls with long hair and boys with short hair. There’s a maximum height of 167 cm (about 5’6″). So it appears they do want people who genuinely look like teenagers and not large adults.

What do you make of these casting calls, readers?