Emilia Clarke and Maisie Williams on Game of Thrones, women and feminism; Liam Cunningham teases "carnage" in season 6 | Watchers on the Wall | A Game of Thrones Community for Breaking News, Casting, and Commentary 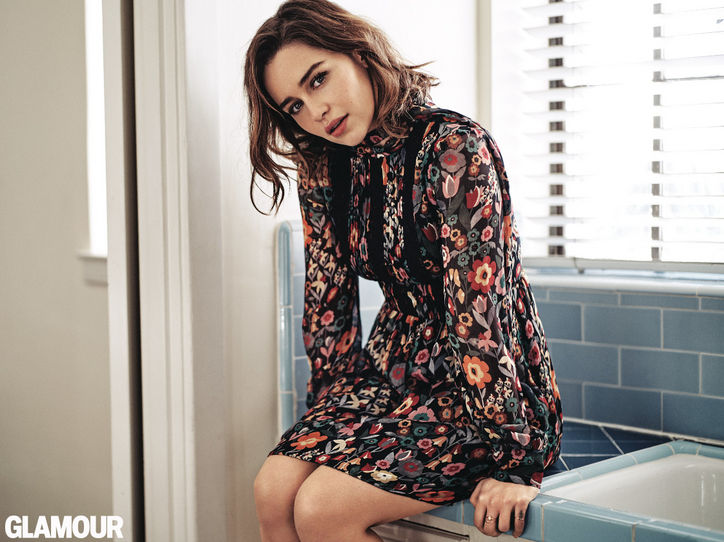 Emilia Clarke appears on the cover of the new issue of Glamour magazine, and discusses the show’s female audience, fan interactions, the ever-present nudity question and much more.

Glamour notes a report stating that women are 40 percent of the Game of Thrones audience. Emilia has a lot to say about the show’s strong female viewership, which bucks the stereotype that women don’t like fantasy.

“I love that so many women watch the show,” she says. “If you look at Game of Thrones on face value—blood, tits, dragons, swearwords—you’re like, Oh, this must be for guys. But if you take that away, the story lines are fascinating depictions of the struggle for power. And women are in on that conversation!”

Her interactions with fans have been varied- some sharing their empowerment, and some perhaps less so. The actress says, “This gorgeous girl once said to me, ‘Watching Khaleesi makes me feel like I can be a strong woman.’ I remember being like, ‘That’s proper.’ That is a wonderful thing. Then there are times with certain dudes where I’m like, ‘You’ve seen my tits. OK, sure, you can have a selfie.’ Awkward!”

As is almost inevitable in interviews with female cast members, the subject of nudity on Game of Thrones arises, and whether or not the show is equitable with it. When asked whether we should see more male nudity, like with Khal Drogo for instance, Emilia explains:

“I saw his member, but it was covered in a pink fluffy sock. Showing it would make people feel bad. It’s too fabulous. No, I don’t know why. But I’d like to bring your memory back to Mr. Michiel Huisman [Khaleesi’s love interest in seasons four and five] and I copulating for the first time, which began with me saying, “Take off your clothes,” and then you got to see his perfect bottom.”

Clarke appears in this playful video, and discusses her ideal future for Daenerys (it does also involve penises) and so much more in the complete article, so check out the interview at Glamour!

Watch this on The Scene. 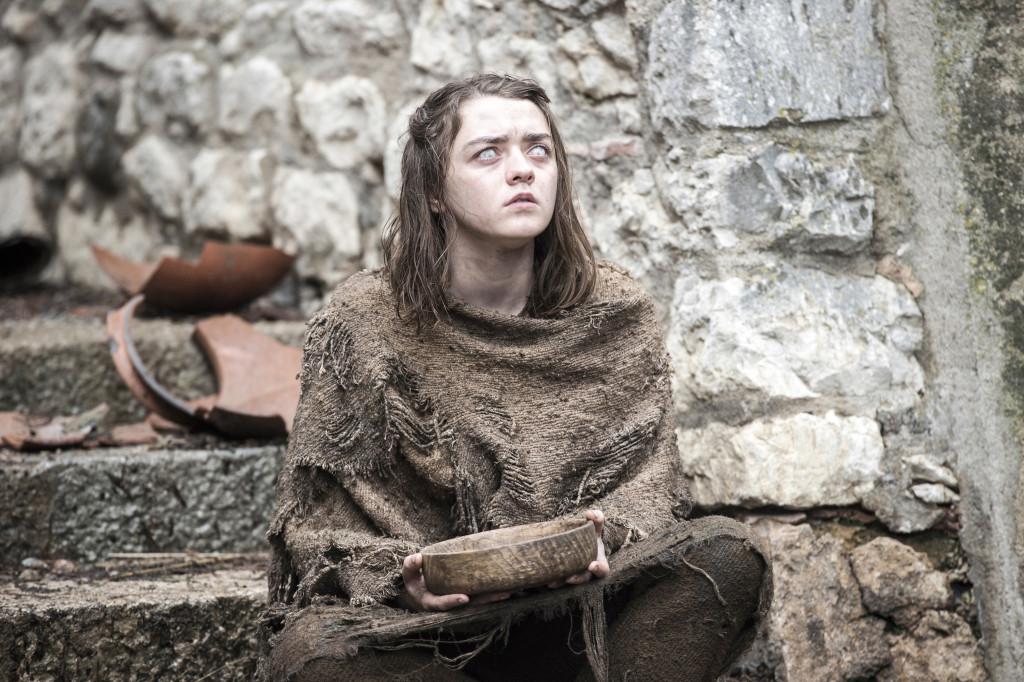 Maisie Williams talks to Entertainment Weekly in a new interview this week as part of the magazine’s ongoing extensive coverage of season 6. She curses those blind contact lens and gets excited about stunts (“I’m so happy I’ve got some again,” she says), but most of all she teases season 6 and addresses the complex issue of handling controversy.

“Every year I think, ‘This is really cool.’ But this year, as I opened the scripts, it’s so exciting because nobody knows what’s happening. They’re going to hate it, but love it, and I can’t wait.”

The actress gives a long and thoughtful response to the question of dealing with outrage surrounding the show and the GoT/feminism discussion. Maisie explains that when she was first asked about whether Arya was a feminist, she didn’t even know what the word meant. Which is reasonable since, as EW notes, she was “like 12,” at the time.

After someone asked her about feminism when she was younger, Williams says:

[S]omeone explained it to me. And I remember thinking, “Isn’t that just like everyone?” And then I realized everyone is not a feminist, unfortunately. But I also feel like we should stop calling feminists “feminists” and just start calling people who aren’t feminist “sexist” – and then everyone else is just a human. You are either a normal person or a sexist. People get a label when they’re bad. Because it works the other way, as well. A lot of men have it hard too. On the show specifically, it’s always been a constant debate because women are treated badly on the show, and they’re treated well on the show. But it’s the same as the boys and the girls and the men and the animals.

Williams admits it can be difficult to speak up on issues, being in the public eye with so many watching. Why? “Because you all got pitchforks and you’re ready to kill us!” She says, “It’s scary if you say something wrong.”

Maisie speaks more thoroughly on the subject in Entertainment Weekly, so visit their website for the complete interview. 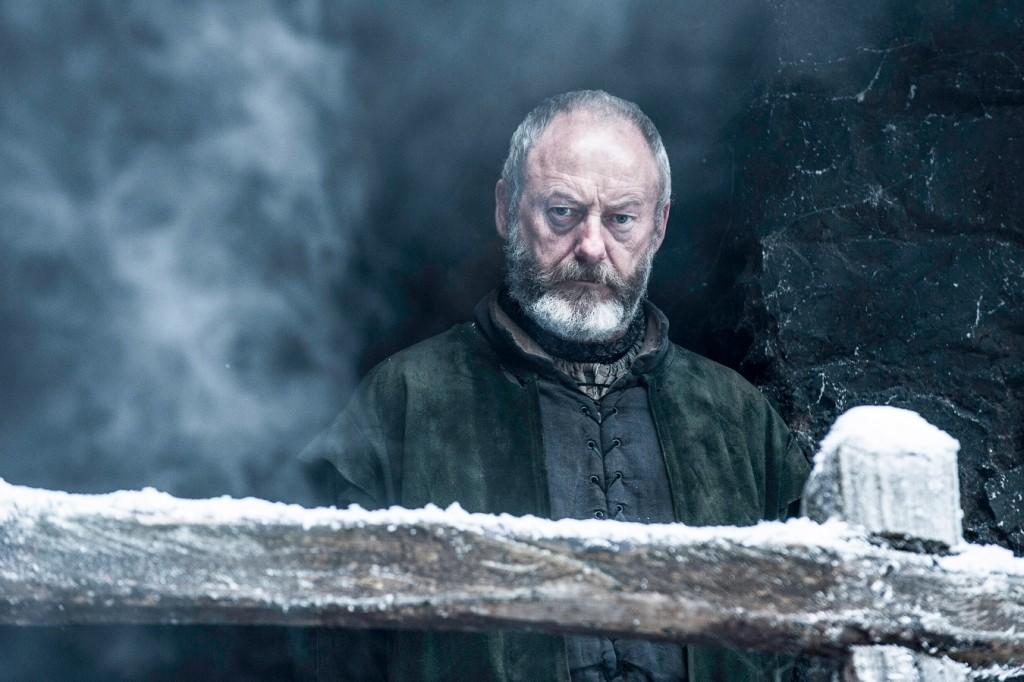 Liam Cunningham is featured in The Hollywood Reporter talking up the new season 6, and dodging spoilers while offering a revving up readers.

As for his exciting appearance in the trailer, where he’s grabbing the sword Longclaw while hanging out with Jon Snow’s  body, Cunningham says, “Why I’m taking it, and what I’m going to do with it, one will have to wait and see, but it’s a very wonderful and clever sequence.”

The actor seems stoked for season 6, raving about the new scripts. “I’m the one screaming ‘WTF! OMFG!’ when I read the scripts,” he tells The Hollywood Reporter. “My personal judge is when I get the ten scripts [for the season] and lock myself away to read them. If I can put them down, things aren’t going well. But this season, there wasn’t an episode in the bunch where I went, ‘Where is this going?’ It was full of intrigue, full of newness, and filled with wonderful characters. We have quite a few new people on board this year, and as usual, there’s carnage with characters going down. There are parts of it that are business as usual, and I mean that in the very best sense. Then there are parts that are stylistically very new.”

Cunningham goes even further, alluding to the show ending and saying, “This year, we pushed the limit even more, because we know it’s going to come to an end soon. It has to. […] This show is bigger than the lot of us, the sum of its parts. To do justice to the finish of this story is very important, that we can walk away with our heads held high, that we can do no more, that we did as much as we could.”

Read more about Davos’s relationship with Melisandre and season 6 in the Hollywood Reporter!