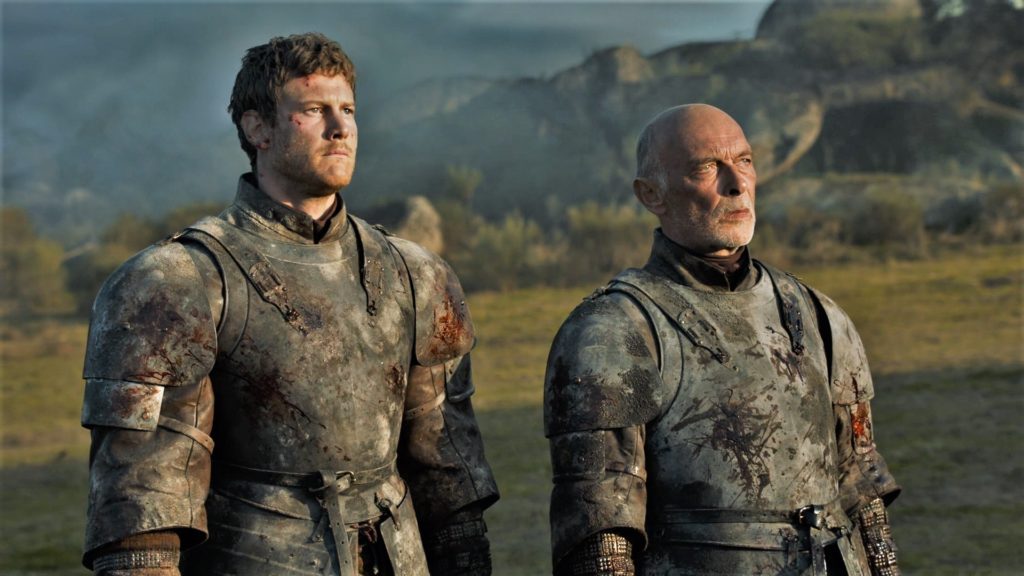 By Luka Nieto and Paige

When Randyll and Dickon Tarly were cast for season six, who would have thought they would become so much more than mere foils for Sam’s side story in Horn Hill? Game of Thrones surprised us by fleshing out this father and son duo with very little screen time. Now they’re gone, and we are here to pay our respects to these characters and the wonderful actors who performed them: James Faulkner and Tom Hopper.

Randyll Tarly’s reputation preceded him. In Season One’s “Cripples. Bastards and Broken Things”, long before he ever appears on-screen, Sam tells a story about his father.

“On the morning of my eighteenth nameday, my father came to me. ‘You’re almost a man now’, he said, ‘but you’re not worthy of my land and title. Tomorrow, you’re going to take the black, forsake all claim to your inheritance and start north. If you do not,’ he said, ‘then we’ll have a hunt, and somewhere in these woods your horse will stumble, and you’ll be thrown from your saddle to die. Or so I’ll tell your mother. Nothing would please me more.'”

That is our introduction to Lord Randyll – ruthless, formidable and ice-cold. And James Faulkner filled his imposing boots like they were made for him. Arguably best known for his role in Da Vinci’s Demons as Pope Sixtus IV, Faulkner has also lent his considerable presence to Downton Abbey, Underworld: Blood Wars, and the Bridget Jones trilogy, as everyone’s favourite creepy uncle, Geoffrey. Yet it has been as Randyll Tarly that he has caused waves among fans everywhere.

Randyll Tarly is impossible to like. When we first meet him, in Season 6’s “Blood of my Blood”, he berates Sam for being bookish, and soft. He’s bigoted, insulting, and you want someone – whether it be Gilly, Sam, or Sam’s wonderful mother – to smack him in the mouth. And you cannot stop watching him. All Faulkner’s Randyll has to do is look at Sam with that steely eyed gaze, and your blood runs cold. Randyll made a fine addition to the considerable canon of Thrones villains that we love to hate. 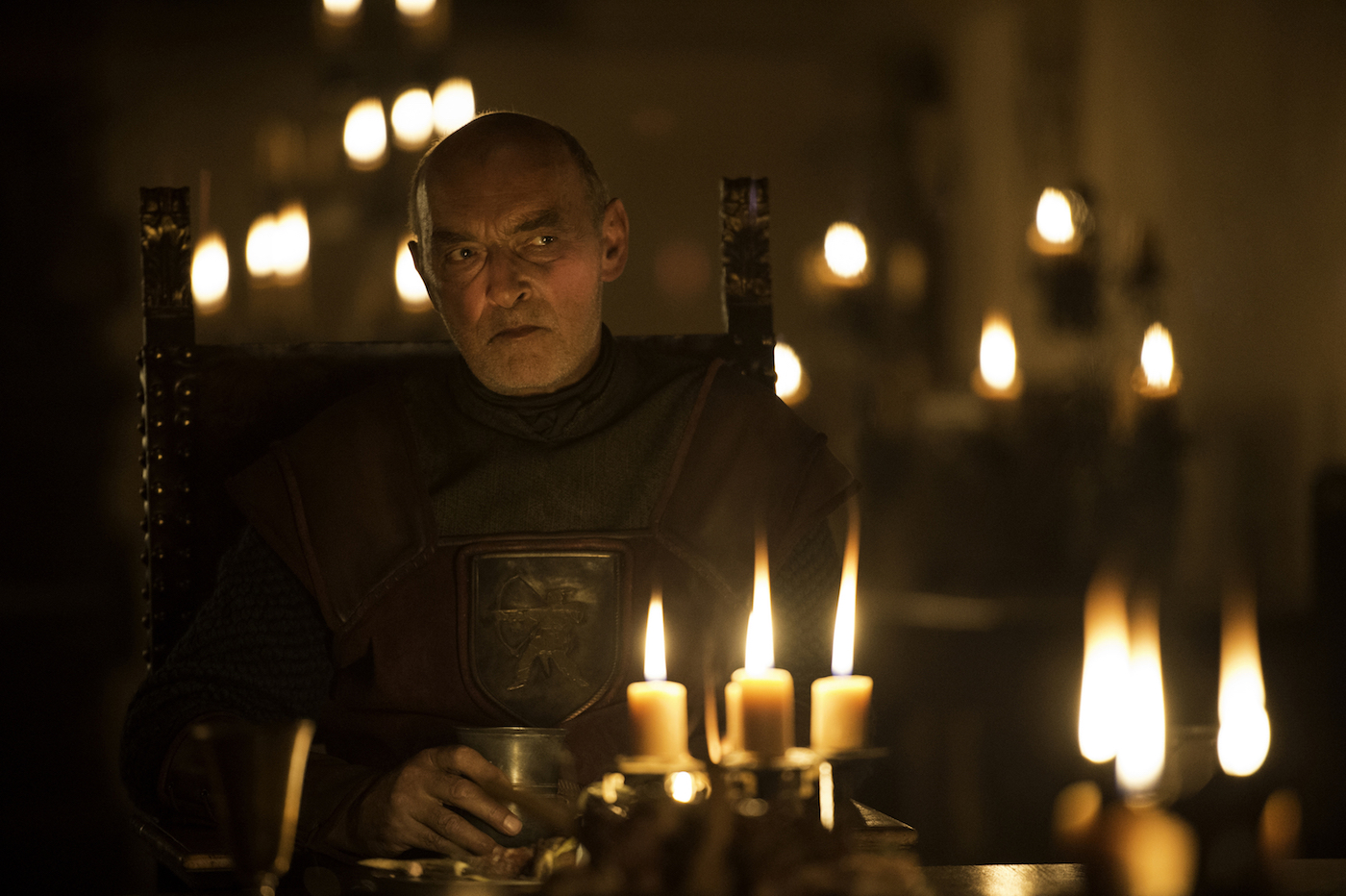 But Randyll was not only a man of insults. When verbally sparring with Jaime Lannister, we see Randyll’s pride in his House. For me, it brought back memories of our much-loved Stannis Baratheon. To my own surprise, I found myself liking Randyll. I fully credit James Faulkner for that. I hate Randyll, but I was enjoying watching him. I wanted to see him and Jaime spar more. I wanted to see more of Randyll.

His end came all too soon. In his death scene in “Eastwatch”, we were given something I doubt any of us expected – tenderness. Ready to face his death, but unwilling for his son to die alongside him, he insists that Dickon is a no one. He is an idiot speaking out of turn. He does it out of… love. We see the man underneath the armour. A man who is protecting his son. It is an incredible performance. Then the final, heartbreaking gesture. He grasps Dickon’s hand, as they face death as father and son. On paper, few would be upset about the death of Randyll, a man who would murder his eldest son out of his own pride. Yet that scene is worthy of tears, in credit to the perfect final performance of James Faulkner, a man who took a character made of steel, and turned him human.

Coming next for Faulkner is a voice role in the new Watership Down mini-series, alongside such talents as The Force Awakens’ John Boyega and Sir Ben Kingsley. In the meantime, we get to enjoy his wonderfully funny Twitter. I salute you, James.   – Paige 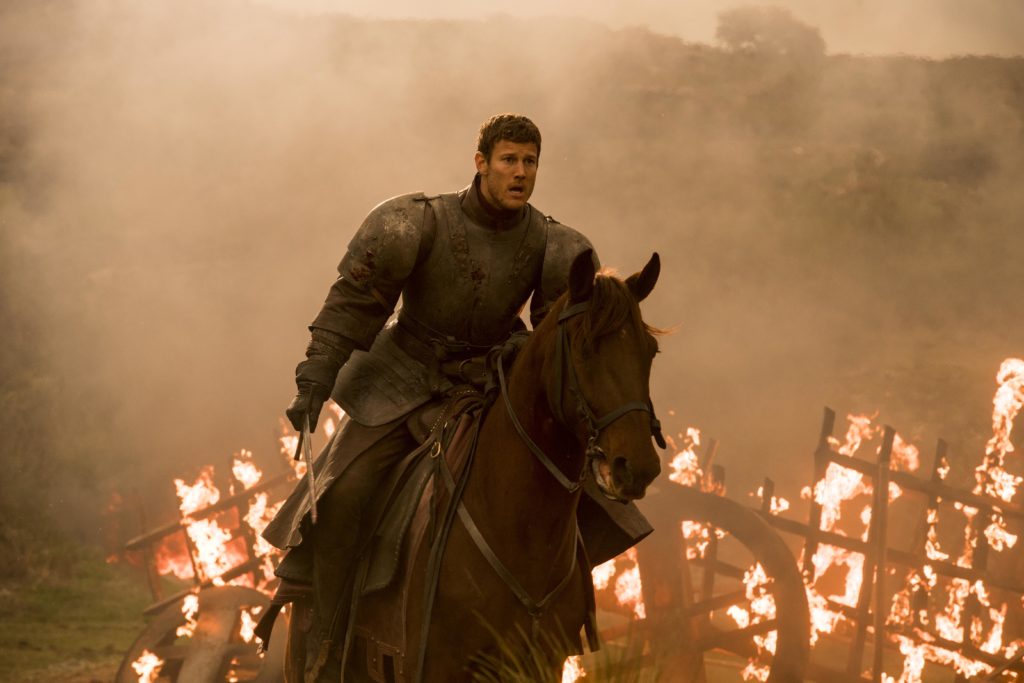 Tom Hopper, meanwhile, had even less screen time to impress us, as Dickon’s brief introduction in season six was taken up by Freddie Stroma. Hopper looks remarkably different, so as always there were some doubts about the recast, but after “The Spoils of War” there has been nary a complaint. And that’s because Hopper did a wonderful job!

The English actor appeared briefly (yet iconically) in Doctor Who (“Get a girlfriend, Jeff!”), but he is best known for his later and much beefier roles in Merlin and Black Sails. Personally, I know Hopper from the latter, as the fictional Billy Bones; he didn’t just get to show off his absolutely incredible physique but his acting talent as well.


Despite my appreciation of the actor, I had no great expectations of his appearance in Game of Thrones, but I was delighted to be proven wrong in “The Spoils of War,” when Dickon opens up to Jaime and Bronn in a way he tragically never could to his father. At first he is compelled to mimic Randyll’s discipline and bellicosity, but at Bronn’s insistence, Dickon laments killing the men he once called friends and fighting the house his family was once pledged to. Here we realize Sam wasn’t the only son that Randyll impacted negatively, as Dickon was terrified of showing any vulnerability.

One could argue he never did again: in “Eastwatch”, he refused to bend the knee even when his father told him to. As Paige described above, Randyll surprised us when he lovingly touched Dickon’s hand before they burned together. I can’t imagine there had been many such gestures before. Sadly, that was a first and a last in poor’s Dickon life.

Tom Hopper’s life, however, continues, and we can hope and expect he’ll continue having a much more successful career than his Game of Thrones character! – Luka Nieto