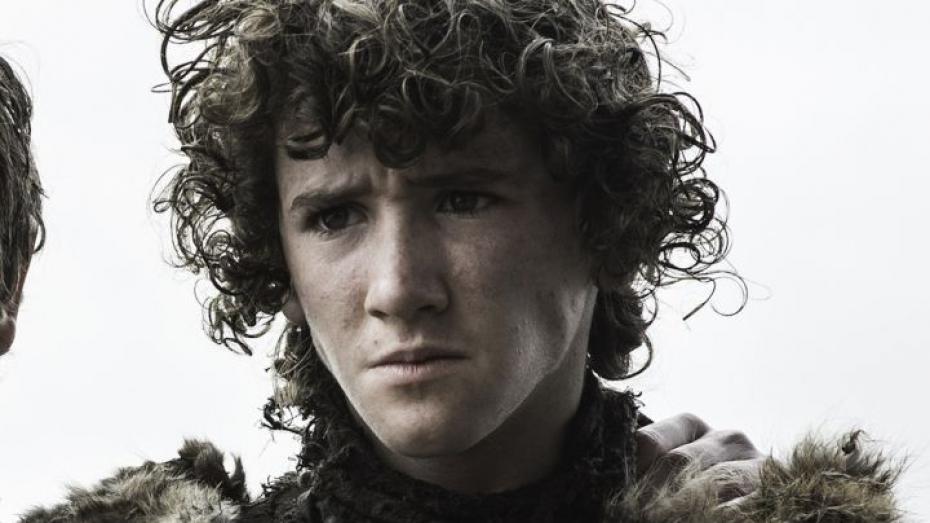 I watched Rickon Stark die, and I was angry. A half-hundred wonderful, eye-popping, nerve-shattering moments from last Sunday’s Battle of the Bastards, and all I could think was…

They did that lad a serious injustice.

This is Art Parkinson’s curtain call. Here you’ll get the good (his multi-season performance) along with… what, in my view, is maybe’s not so good (the way the show sent him off). This is perhaps not your traditional curtain call. But it sums up the joy we had in being reunited with the actor and his Stark, as well as the horror– and anger– we felt at Rickon’s loss.

Admittedly it’s hard to separate personal feelings from professional critique. People that work on the show, people you know– people you have met, people you like and get along with– tend to work their way into your heart. You want what’s best for them and for their characters. A month ago, I wrote Kristian Nairn’s curtain call, and that was difficult for a different reason, because even though I was sad to see Hodor pass into the Night Lands, I knew the show had given him the ultimate, most glorious sendoff.

For that reason, this curtain call was harder still. 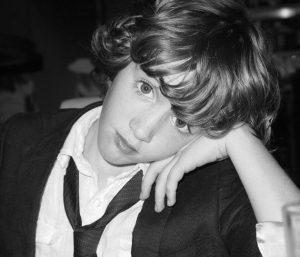 It’s hard to separate nerd rage from real, critical anger. I had so completely tricked myself into believing the show had set up a House Umber betrayal (#PrayForRickon) (#Trickon) (#ThatDirewolfHeadWasTooSmall) that when that particular aspect fell woefully short of expectations, the remainder of the episode tasted like ashes on my tongue. Which is sad, really. BotB had some fantastic, cinematic, groundbreaking moments. Plus, as Sue reminded me, this is the very epitome of a “shaggy dog” story. (Google it, people!) If that’s what George has in mind, trolling us with some vague hope, then why shouldn’t the show?

I was so irritated that I was irritated with myself! Grow up, Axey! Geez…

But it plagued me. Why would they do that? Why take the most stubborn, determined of all the Stark children and make him a casual casualty in their continued, episodic quest to remind us that Ramsay Bolton is a real stinker? They’ve robbed Peter to pay Paul before, lessening the realism of a character’s decision-making in order to ensure a more dramatic payoff; you need only look as far as Arya’s blithe walk through the Braavos canals a few episodes ago for that, or Littlefinger’s sudden weird need for Sansa to rescue him in front of the Lords Declarant back in season 4, or… Well, we could all list our WTF moments. The show loves its Big Moments. And sometimes the price of a Big Moment is a previously-crafty character behaving in an exceedingly stupid fashion. 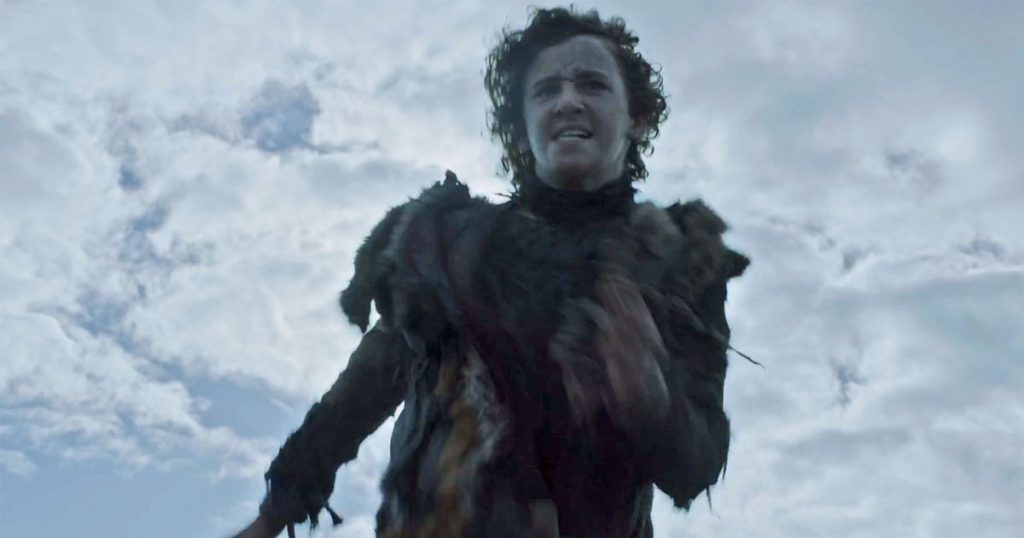 Granted, we don’t know if Rickon’s ultimate fate in A Song of Ice and Fire will be akin to this: a pawn used by a northern house (whoever lives on Skagos, I suppose) to further their own ends, ending in his demise, perhaps. Anything is possible within the mind of George R.R. Martin.

And of course as my logical mind began to take over the argument, I settled in and was able to enjoy the whole of it on second watch. Here’s the thing: After tonight, they only have 13 episodes left to tell the entirety of what remains of the story. If Rickon had survived, if Smalljon Umber had turned on the Boltons, you’d still have two more characters (and their quasi-heroic arcs) to play out onscreen in the remaining episodes. 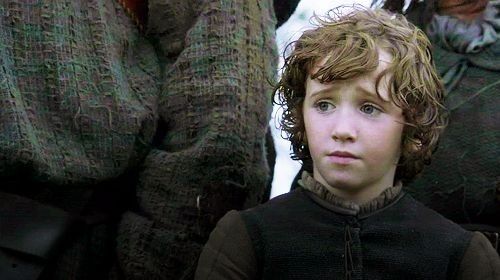 Could they have pulled off #Trickon and still managed to kill off Rickon and Smalljon? Yes, of course, but that’s a … quibble, I suppose. I would have been satisfied if Rickon had bitten the dust whilst violently gnawing on Ramsay’s kneecap, but most people would have still just been pissed he’d died. Could Rickon have, I dunno, zig-zagged instead of running straight across the field? Sure. But by that time, he was Marked for Television Death, and I could imagine Ramsay’s inevitable smirk as he drew back an extra arrow or two: “Thank you for giving me a few more shots, little man…”

So yeah. Rickon was dead either way. And of course Art Parkinson played it for all it was worth.

And that, ultimately, is what this is about. This song is for Art! 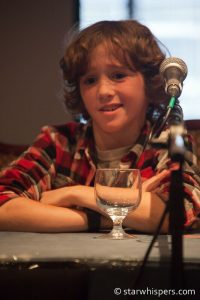 His first spoken interaction with Bran was all doom-and-gloom (“No, they won’t.”), so it should be no surprise he was slated for the grave. Most Starks are. But Art showed what a impact he could make with minimal screen time and lines. (Hell, he had ZERO lines this season, and Rickon’s death still rocked the fandom.) Whether by expressive eye or sullen word, Art made Rickon Stark his own. When he began with the show, what was he, seven years old? Eight at best. He probably didn’t even realize it was a job. Shooting television probably just seemed like an exceedingly cool way to spend the day.

In truth, Rickon had so few scenes when compared to his other on-screen siblings, any other actor playing Rickon could have been forgotten, shucked off to background actor status once the pilot aired.

The kid’s come a long way. And he’s all of what, fifteen now? Barely getting started.

So yes, we mourn the character. But we’re still happy for all that Art has been able to accomplish– and for making us love Rickon so much. That’s all Art. 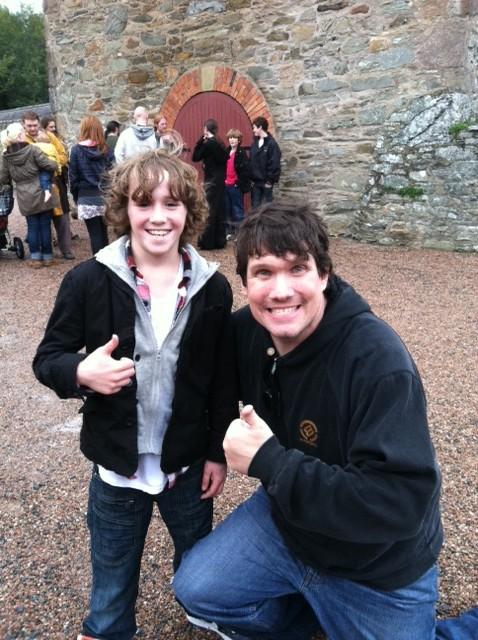 True story: At one particularly dull moment during one of the lovely TitanCon (Belfast) feasts, Art got it into his head two particular fans deserved to be together– and by Be Together I mean married. (I shall withhold the names of the not-actual-couple for their protection.) So Art dragged them both beneath the feast table, proclaimed himself a pastor, and wedded them together.

No, I have no idea if the “happy couple” then went and had a honeymoon.

And so does Game of Thrones. We’re gonna miss Rickon– even while Art continues to rock on.

Give the lad your love, Gatewatch! 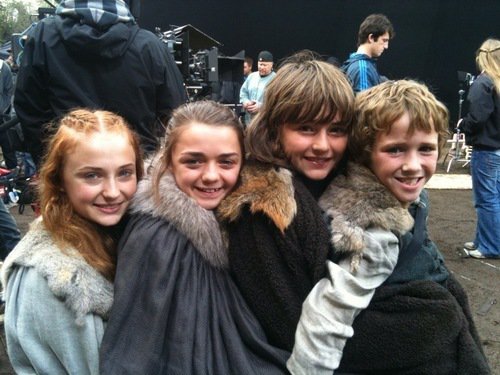