Coming Home: A Con-Goer's Perspective | Watchers on the Wall | A Game of Thrones Community for Breaking News, Casting, and Commentary 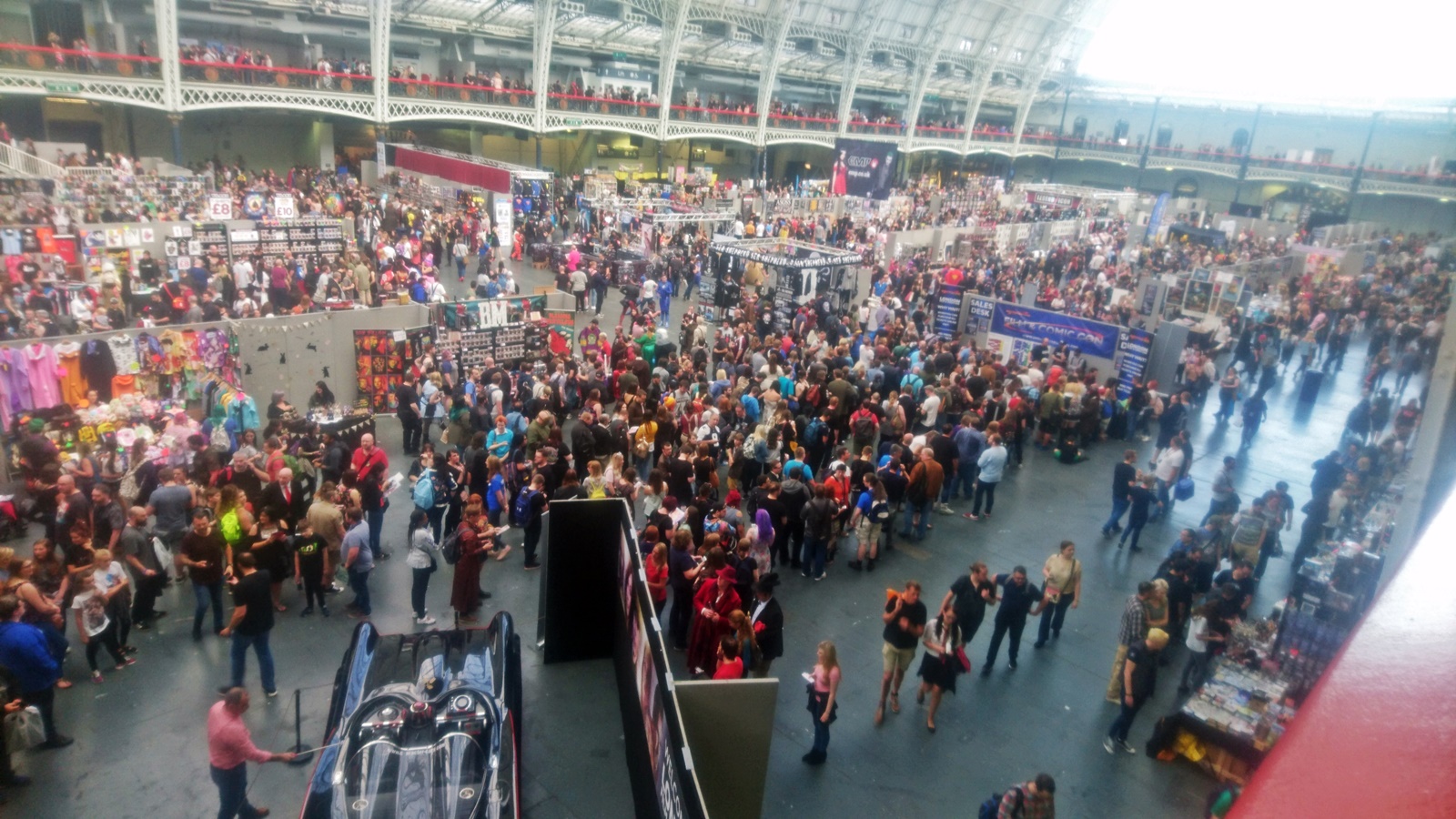 London Film and Comic Con. Photo courtesy of the author.

A Dragon Queen, a Red Priestess, and an Ice Zombie walk onto a train: it sounds like the start of a bad joke. But it isn’t- it’s real life.

It’s Saturday, the second day of London Film and Comic Con. Every year, thousands flock to the Olympia Exhibition Centre in Kensington, London, to meet their heroes. To dress as Daenerys, or a superhero, or just have a great time. LFCC, as it’s known, is the biggest gathering of nerds in the UK. I was the Red Priestess at the start, ready to begin my third year. Followers of the Watchers on the Wall Twitter likely saw my photo of Pilou Asbæk:

Yesterday an article about the convention written by Liz Jones was brought to my attention. She attended the first day of LFCC. How did she describe this Disneyland for nerds? Not nicely, to say the least.

“It’s for saddos who self-medicate with fantasy. People with no real lives of their own. Who never grow up. Spectators, not doers. Passengers.” Jones asks a man dressed as the Green Lantern if he has a girlfriend. No, he doesn’t. “See?” she says. “Saddo.” She goes on to say “Everyone is grotesque. Ugly. Exhibitionist.” Damn! Is that necessary? What did we do to deserve that? Aside from being – shock – different.

“This is my first con. And it’s the first place I’ve felt like I belong.” I stood outside, taking a breather after a busy day. I got to talking with a girl and her boyfriend; she was dressed as Daenerys, the boyfriend as Anakin Skywalker.

We got talking; that’s what you do at cons. No one is a stranger, we’re all one big, nerdy family. You talk to people in queues – British rules of never talking to anyone while in a queue do not apply here. She wanted to come to meet Kristian Nairn. He was lovely, she said. They were both having a great time, and they’d be back. They felt at home. I know what they meant. 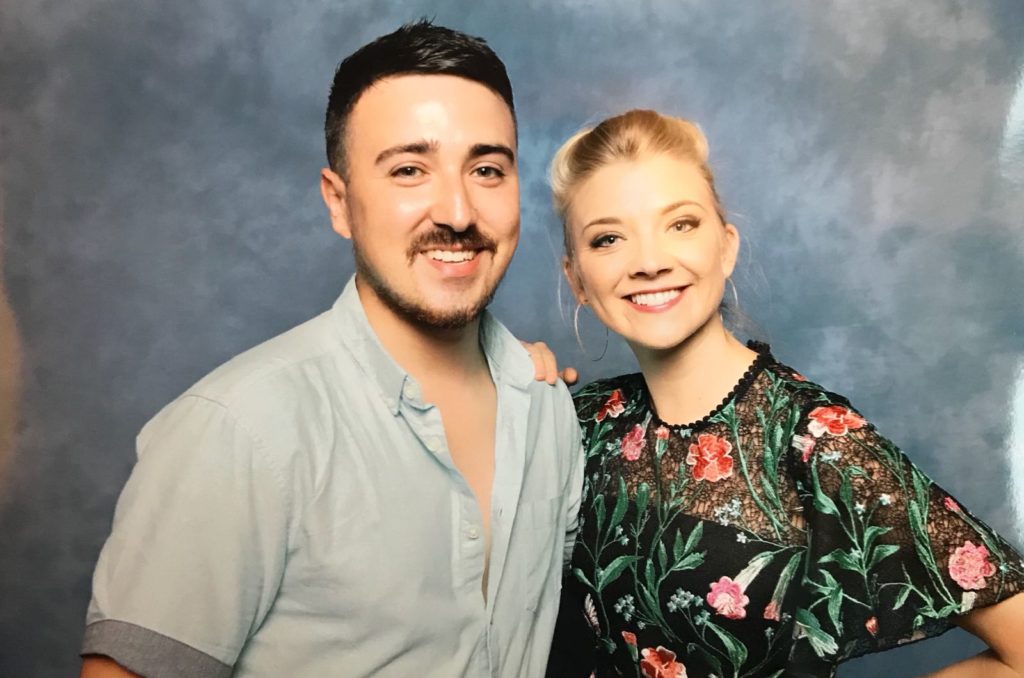 I started doing comic cons three years ago. My first was LFCC 2015; Charles Dance was due to be there, I had to go. Followers of my Twitter will be familiar with my battles with mental illness. I’m not quiet about it. I have depression, anxiety, and PTSD. But when I’m at LFCC, I walk alone, without any fear – something I can’t even do in my home town. These are my people. For example, once while waiting for one of my photoshoots, I was approached by a man who began talking to me. All fine – we were discussing costumes. Until he got angry, and began ranting at me. Within moments, I was surrounded by women, guiding me away from him. I felt safe. It’s the same for many. It is a place where we can let our freak flag fly without judgment. We can meet our heroes. We can become our heroes. Go to enough cons, and familiar faces start to become friends. We are family. 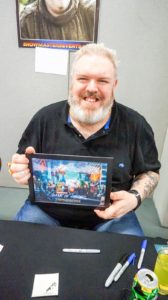 Kristian Nairn
with artwork by @WightsKing

You may have seen the photos of some of the Thrones cast with artwork. I was there when they were given that artwork. It was my best friend, the hugely talented @WightsKing, that made the artwork and gifted framed art to Kristian Nairn, Daniel Portman, Gemma Whelan, and Pilou Asbæk. The former three are familiar with us now – we’ve seen them at a few cons, we always go and say hello. We chat for a while. We’re all part of the Thrones family, and the con family. Pilou was new. His laugh at seeing the “Finding Theon” artwork was the same you hear when he’s on screen as Euron. He’d never done LFCC before, and he couldn’t stop talking about how much fun he was having. He talked to every single person that met him as if he’d known them forever. I walked away from him, giggling like a schoolgirl because he was so nice, and so charming. At the end of Saturday, his gift was still on the table for all to see. 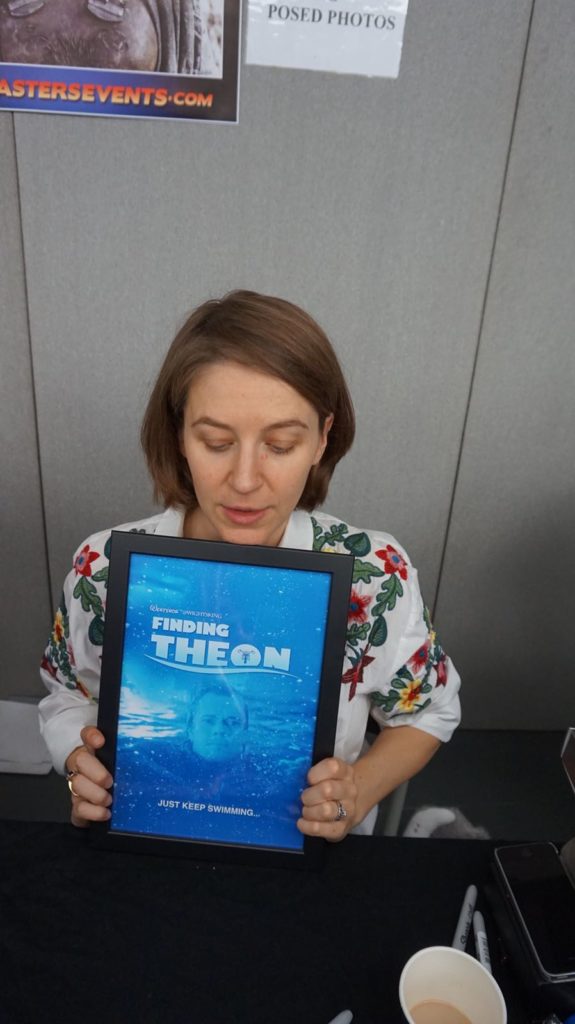 Gemma Whelan with her ‘Finding Theon’ artwork.
Artwork and photo by @WightsKing

I’ve met people from every walk of life at comic cons. Doctors, army veterans, teachers, lawyers. You have the elderly, you have children, and you have everything in between. It doesn’t matter how old you are, what colour you are, what gender you are. Everyone here is equal in our united love of all things nerd. There is something for everyone there. But what we are not here for is judgment. The comic con is our place to let go, to be whoever we want to be. A little girl wants to dress as Arya? She can. A man wants to be Ned Stark, post-beheading? He can. I want to dress as Melisandre, and joke about barbecuing children? I can. 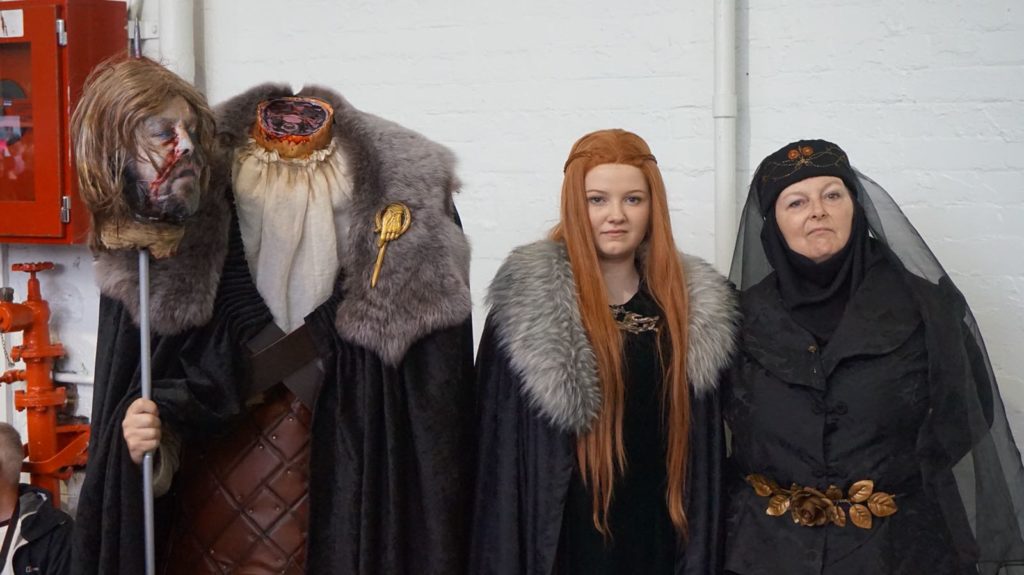 I love London Film and Comic Con. I get to meet old friends, and make new ones. I dress up, I meet my heroes, I go home and start planning for the next one: the next con, the next costume, the next group of people I want to meet. I feel like my life has changed for the better since I started doing cons. Cosplaying gives me confidence I never thought I’d have. I know so many people that feel the same way. We do this because we ARE doers. Because we have lives, we have things we love and we glory in it. We have what Ms. Jones will never, ever understand. We have passion, and we aren’t grotesque or ugly. We are nerds. It is who we are. It is what we do. It is what we love. And we don’t judge anyone else for that. Perhaps she should try it. 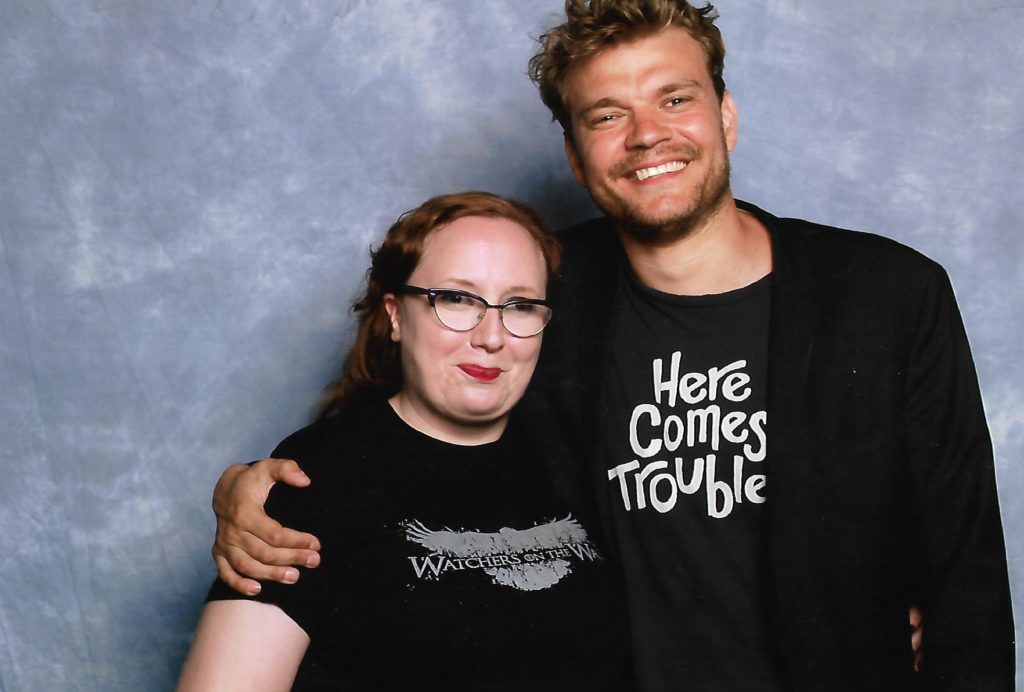 Pilou Asbaek and Paige. Photo courtesy of the author.