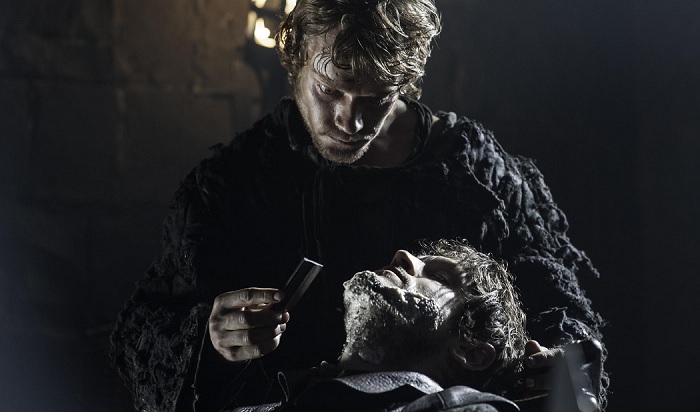 Alfie Allen bares all- not in the early Theon sense- in a new article in Digital Trends, opening up about Theon’s transformation into Reek, his possible return to Theon, and offering hints at season five.

The actors discusses Reek posing as Theon to help capture Moat Cailin, and talks about that intense shaving scene with Ramsay in season 4, where Reek learns of Robb’s fate:

I mean it’s really down to those boys David and Dan having that faith in me, leading up to that moment when, as you say, he’s pretending to be Theon again. It was kind of daunting to do, and it did kind of confuse me slightly. But it was needed, and I think it shows where Theon may be returning at some point. I guess that might be the first start of it. For me, the real first start of it is when he finds out about Robb Stark’s death. There’s a part of his brain that’s been inactive that maybe gets reactivated by that news.

Allen also gives us these tantalizing hints at season five:

I can tell you that there will be characters crossing paths and interacting — especially in my storyline — who have never met, or have had just minute amounts of screentime together. That relationship blossoms, and the running theme of Season 5 is that you get so many different characters who were in different parts of the world crossing paths with each other.
I could also say to you that Theon will definitely go through his trials and tribulations this season. And there may be, in some sort of Game of Thrones way, a light at the end of the tunnel for him. There’s definitely a moment or two — and one in particular — that will really blow people away.

For more on filming in Belfast, music, and reading the books, check out the full interview at Digital Trends.

Sue the Fury: There’s been a lot of speculation that Theon could run into Brienne or Sansa in the North. With this interview’s hints, I’m starting to think such a thing is a lot more likely.