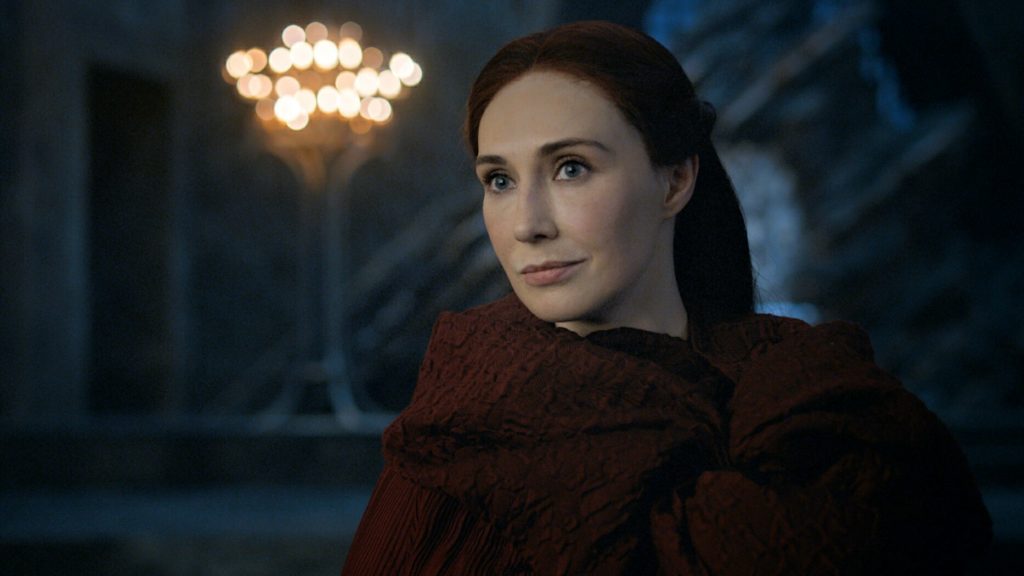 Carice van Houten made a surprising return in “Stormborn,” only to apparently say farewell again a single episode later. Who knows how and when Melisandre will return from Volantis (will she meet Kinvara?); but there is much to talk about, despite the brevity of her appearance, and no one has more to say than the Dutch actress who brings this mysterious character to life… though she is not all mystery anymore, is she?

Van Houten spoke at length to ELLE about Melisandre’s new state of mind and her key season seven moments, though it did not escape her how fleeting the scenes were:

“I’ve had some really epic scenes,” van Houten told ELLE. “In fact, I’m spoiled because now I feel like, ‘Where was my big, crazy scene this year?'”

The Red Priestess came and went, but she did leave a mark: she was responsible for bringing Jon and Daenerys together, or rather Ice and Fire, implying the Prince or Princess That Was Promised may actually be the Prince and Princess That Was Promised; and then, as she hid from Jon (because if he sees her “it’s the end of her,” as van Houten put it,) she casually threw a prophecy at the eternally annoyed Varys:

“It was different for her, talking to Varys, than it was talking to Stannis or Davos,” van Houten explained. “Here’s someone who, like her, has a long-term vision, who has that sarcastic sort of confidence. They both know how to get what they want in sneaky ways.” Understanding doesn’t beget friendliness, however, as Varys told her to never return and in turn she coldly predicted his death in Westeros, a prophecy van Houten entirely believes, despite Mel’s spotty track-record: “I think he’s not gonna make it. But that’s my personal thought. Some things, terrible things, have to happen in these last seasons! It’ll probably be one of those where he’ll try run from it, but he’ll get it in the end.”

“Well, her eyesight isn’t great”, Carice quipped, regarding Melisandre’s less than stellar track-record. Stannis wasn’t the Son of Fire after all, an error for which Stannis paid with his life, as well as his wife Selyse’s and, of course, their daughter Shireen’s. For many of us, the sacrifice of the little stag was one of the most difficult scenes to watch in the history of Game of Thrones, but it remains Carice’s favorite: “I think that was probably my favorite scene of the whole series,” she said, before admitting it was “fucking awful. That poor child! And [Kerry Ingram] was such a lovely girl with a lot of humor. We had a lot of fun backstage. But it was also an iconic scene.”

With Stannis out of the way, Melisandre is now placing her bets on Jon… and Daenerys. Lately, you may have noticed she isn’t as fanatically sure of herself as she once was: where before she was “a fanatic, someone who had a really strong vision of the future and was not prepared to let it go,” now things have changed and “it’s not about her anymore. She’s made huge mistakes and is aware of it. She refers to how ‘prophecies are dangerous things,’ so she’s learned from her mistakes. She’s more careful. And she’s regained a little bit of her faith after bringing Jon Snow back from the dead.”

Melisandre underwent a transformation following Stannis’ defeat and the resurrection, and the result is a more tridimensional character, not so dependant on mystery to remain interesting. Van Houten found new inspiration for this more “sensitive and vulnerable” version of the Red Woman in her first child, who she just had given birth to little more than a month before filming. Of course, this affected her greatly:

Carice was “crying on set” due to the distance from her baby, but in a way this helped: “The good news was that my character has become more vulnerable, more transparent, more human. I could use my own emotional tools, my own shit. I was relieved when I was able to show some tears, show some doubts and fear and vulnerability.”

For more about sharing predictions with Nikolaj Coster Waldau, Melisandre as an old woman and Carice’s own theories about the red ruby choker, read the interview at ELLE.