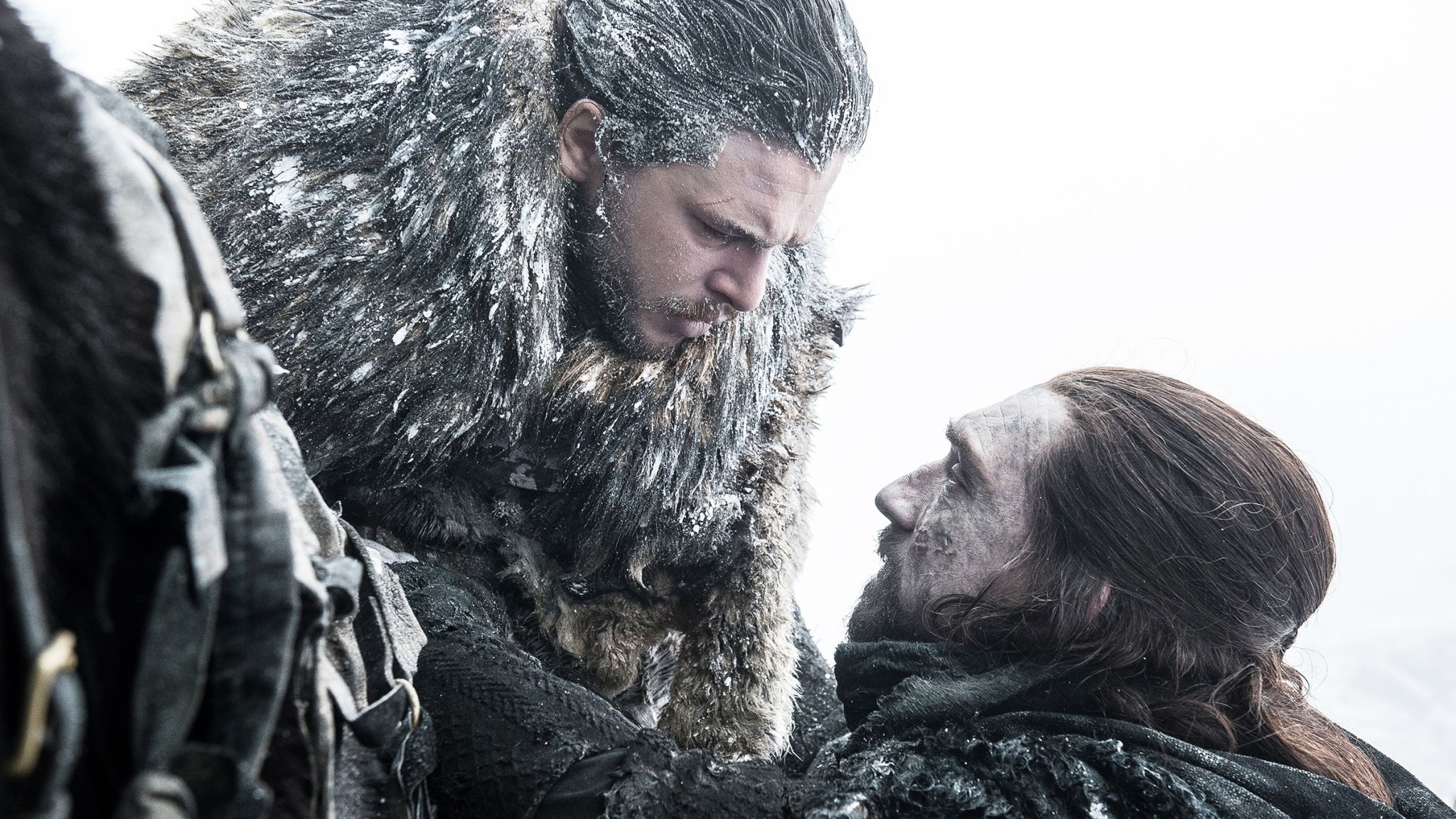 In the recent episode Beyond the Wall, Jon Snow, the King in the North (or South, if you listen to Tormund Giantsbane) found himself in a dire situation. Left for dead by his companions who’d retreated on dragonback from the Night King’s icy artillery, Jon faced imminent attack from the wight army that he’d been telling everyone about.

Like the Last Hero from one of Old Nan’s tales. 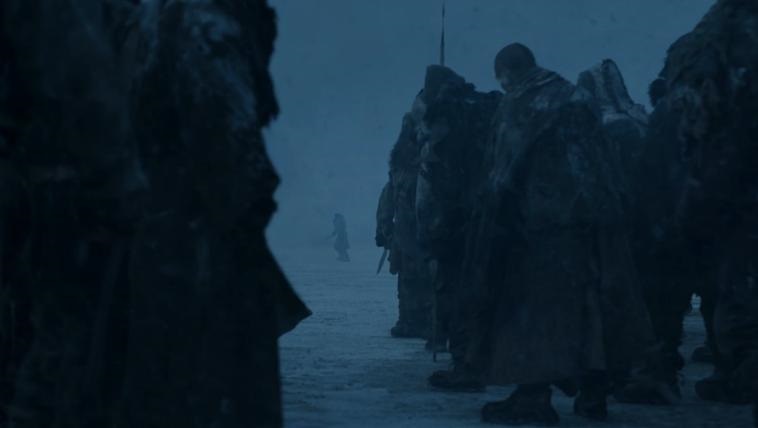 Old Nan was featured in the first season as a storyteller and caregiver to young Bran Stark, who’d heard her speak of the Long Night of legend, the White Walkers with their dead servants, and ice spiders as big as hounds.

In the books, Nan tells more of that story, about the Last Hero and his quest to stop the ruthless monsters.

So as cold and death filled the earth, the last hero determined to seek out the children, in the hopes that their ancient magics could win back what the armies of men had lost. He set out into the dead lands with a sword, a horse, a dog, and a dozen companions. For years he searched until he despaired of ever finding the children of the forest in their secret cities. One by one his friends died, and his horse, and finally even his dog, and his sword froze so hard the blade snapped when he tried to use it.

Jon’s story doesn’t track exactly with Nan’s tale of the Last Hero. Most of his companions had escaped (RIP Thoros of Myr and five unlucky and nameless wildlings), his canine buddy Ghost was safe at Winterfell, Jon hadn’t even been riding on a horse, and he was even one up on the Last Hero by having a much hardier sword.

But the wights were closing in, and he was the last man alive for miles.

But, Jon was not alone. His undead uncle Benjen Stark, riding a supernaturally brave horse and wielding a long-chained flaming flail (complete with a badass sickle at the other end) arrived to offer his nephew the chance to escape. 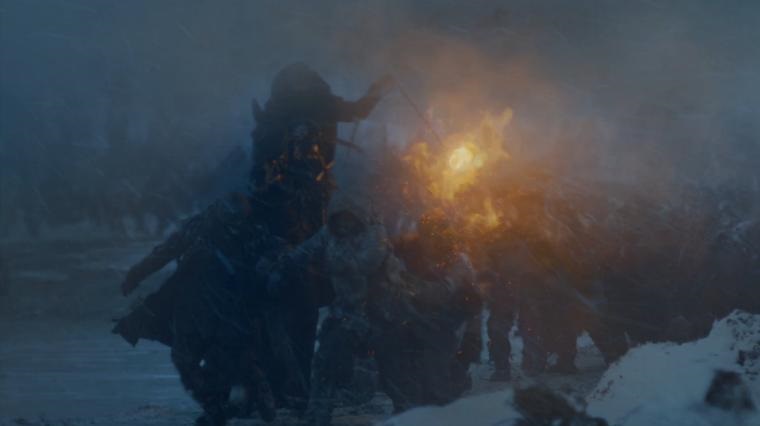 Benjen told Jon that there’s not enough time for them both to escape (using fewer words than that) and sent the horse on its way before Jon could try to argue and lose ground to the advancing, fast-running, indefatigable wights.

I understand why fans do not like the idea of Benjen choosing to stay behind and have all of the approaching wights pile on him like linebackers, instead of trying to escape as well. We’ve bitterly experienced something like this before in the previous season, with another favorite secondary character of book-readers.

Brienne: Blackfish!
Blackfish: Yup!
Brienne: Get in the boat with me and Podrick!
Blackfish: Nope!
Brienne: But, there’s no reason to stay behind. It’s not like you’ll be covering our escape as we float downriver.
Blackfish: Yes yes, but for complicated reasons, possibly involving contracts, possibly involving the need to maintain dramatic stakes and show that death is possible, I’m going to go down fighting.
Brienne: But, let’s be honest here, your death won’t really count. You may as well live.
Ser Barristan: Tell me about it.

But even though I wasn’t happy that the Blackfish opted to stick with Riverrun (particularly because I wanted him to make his way to his true love, Lady Oleanna — #Blackthorn) I’m okay in accepting Benjen Stark’s assessment that there was no time for them both to escape.

Because Benjen Stark’s doomed fight against an unbeatable foe is archetypal. If Jon is the Last Hero, Benjen is the Second-to-Last Hero. The guy who gives his all for the hero to live. The guy who doesn’t get the song. The guy who does his duty, knowing it’s his doom.

We’ve heard this sentiment before, from another legendary ranger.

Qhorin: The Watch has given you a great gift and you only have one thing to give it in return. Your life.
Jon: I’d gladly give my life.
Qhorin: I don’t want you to be glad about it! I want you to curse and fight until your heart is done pumping. Know this, boy. Your death will be a gift to them, south of the Wall. They’ll never know what you’ve done. They’ll never know how you died. They won’t even know your damn name. But they’ll be alive, because some nameless bastard north of the Wall gave his life for theirs.

The fact that we know Benjen’s name and his fate, covering Jon’s escape, shines a light on the things we don’t know about him. I don’t necessarily mean what adventures he’d been having as the Three Eyed Raven’s undead commando, or where he got that sweet flaming flail… 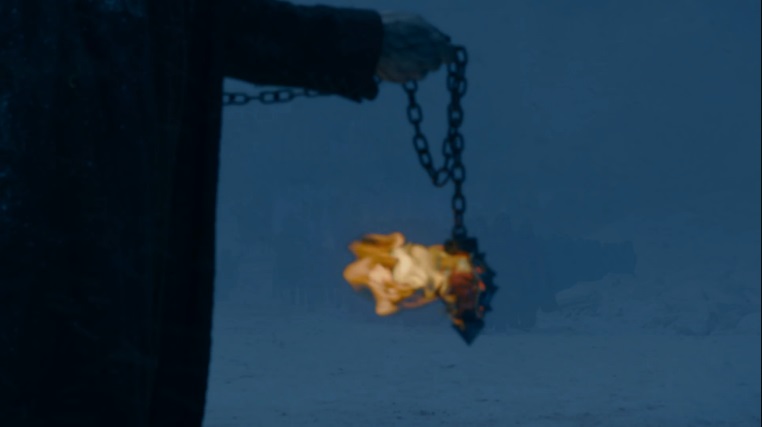 Beric: I assumed he just ignites it with blood magic.
Thoros: Or propane. It saves on blood.

He was one of the last witnesses left to the events that started Robert’s Rebellion.

Did he have the skinny on Rhaegar and Lyanna’s relationship?

Did Ned trust Benjen with the secret of Jon’s parentage?

Was that going to be an item on the discussion agenda? The discussion that Benjen promised Jon they’d have when he returned to Castle Black from his ranging in Season One?

Jon: Come with me
Benjen: There’s no time.
Jon: But you promised we’d have a discussion.
Benjen: Sure, when I return to Castle Black! Does this look like Castle Black?
Jon: Aww, man.
Benjen: Look kid, if there wasn’t a horde of wights about to descend on us, sure, we’d have that talk.
Wights: Actually, we’d like to hear this story too.
Night King: A story would be nice. There’s not much excitement up here. Watching six guys freezing on a little island was like the Superbowl for us.
Benjen: *slaps horse* Sorry to disappoint, you monsters.

Why did Benjen join the Night’s Watch in the first place? For honorable reasons or for less noble ones?

Did he go to the Wall to atone for something?

Those secrets are likely to die along with Uncle Benjen, buried under a pile of wights. I understand why people are sad to see this potential font of information dry up.

But Benjen wasn’t here to entertain us, like a jester (Tyrion can confirm Benjen’s lack of jesting) or a storyteller. He was a man of the Night’s Watch, not Old Nan of the Night’s Watch. Like Qhorin Halfhand, Benjen knew the deal, that wearing the Black carries the possibility of sacrifice. 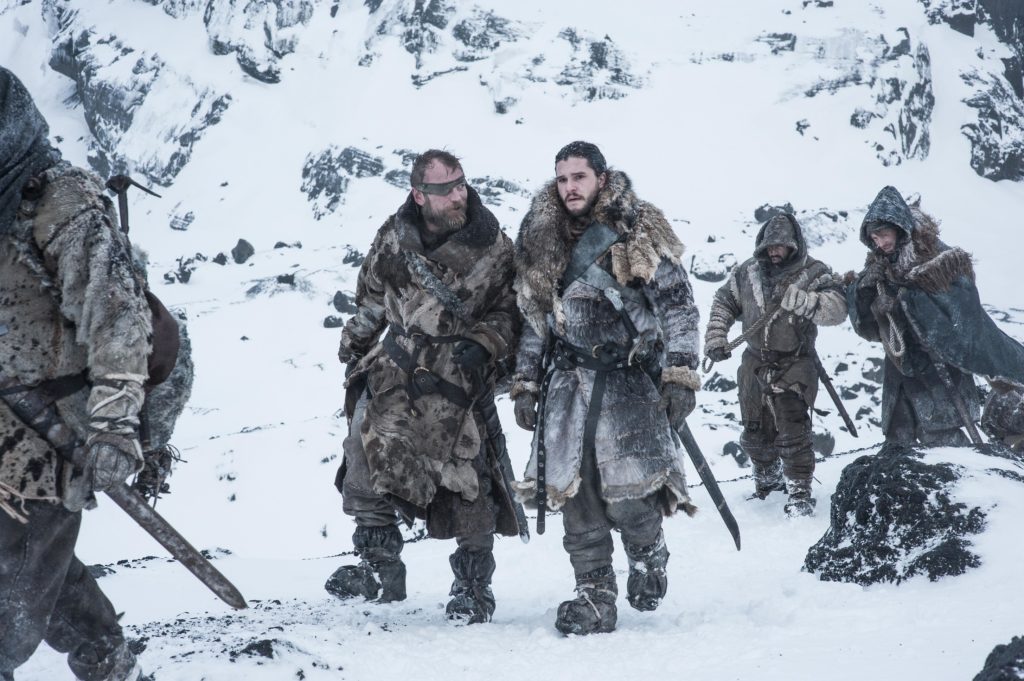 Beric Dondarrion sounded a lot like Qhorin when talking to Jon on the march north from Eastwatch.

Jon: So what are you fighting for?
Beric: Life. Death is the enemy. The first enemy, and the last.
Euron: Are you guys talking about storms?
Beric: No.
Euron: Sorry. I’ll bugger off then. Nice eyepatch.
Jon: But, we all die.
Beric: The enemy always wins. And will still need to fight him. That’s all I know. You and I won’t find much joy while we’re here, but we can keep others alive. We can defend those that can’t defend themselves.

Benjen’s actions in the episode were Beric’s words given life. He’d taken an oath.

I am the shield that guards the realms of men.

I don’t fault Jon Snow for finding a loophole in that same oath to get out of his service to the Watch. He’d been killed by his own men, who thought they were acting in service to those same southern realms that Jon was trying to protect.

Night gathers, and now my watch begins. It shall not end until my death.

But Benjen Stark was not clinging so much to the beginning of the oath, but the final piece, which has much the same sentiment but with an important difference in phrasing:

I pledge my life and honor to the Night’s Watch, for this night and all the nights to come.

The back end of the Night’s Watch oath more heavily emphasizes the long-term duration of service. When Benjen died and the Children brought him back with a cardiac injection of dragonglass, Benjen had more nights to come.

But now Benjen’s watch has ended. We will not see his like again. 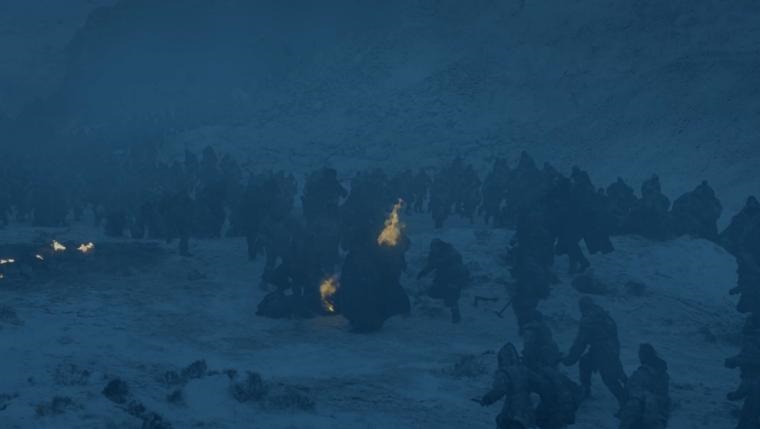 Benjen: Hold on. If I can just crawl with this scrum of wights on me to the lake…
Me: Don’t you tease us, man. Don’t you even.
Benjen: Fine. And now my watch has ended.

So, respects go out to Benjen Stark, First Ranger and devoted uncle. The reason Jon Snow gets to be the last hero to leave the battle of the frozen lake. The second-to-last-hero found his resting place there.
Benjen Stark, Beyond the Wall, episode 706, Jon Snow, The Last Hero