Benioff and Weiss address their silence on cut Game of Thrones characters | Watchers on the Wall | A Game of Thrones Community for Breaking News, Casting, and Commentary 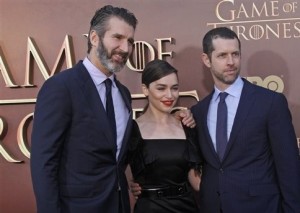 There have been some noticeable and controversial character cuts from Game of Thrones, changes that fans of the books grumble over and debate with passion.

In a new article, David Benioff and D.B. Weiss talk with Entertainment Weekly about their decision to not address these decisions with viewers.

The quotes from Benioff and Weiss don’t contain spoilers; however, fans should be aware that the text and the photo at the EW site may be considered a spoiler, so follow the link with caution.

When questioned about the lack of a particular character, D.B. Weiss told EW, “We reached that point that commenting individually on what is or is not in the show from the books is a prospect of diminishing returns.” He goes on to say, “Early on in the process, it was something we talked about a fair amount. [The change of strategy is] not out of any disrespect; the fact that people care enough about the books and the show to have arguments about it is something we have huge gratitude and respect for. I just don’t think there’s value in anything we have tosay about it. It opens a Pandora’s box of questions you could spend your whole life answering, and the net result is that what you said will probably make people less happy than if you hadn’t said anything.”

Apparently, Benioff feels that fans will understand better, that it’ll be “easier once everything is out and it’s 70 hours,” the complete seven seasons. He explains to EW, “People will complain about things because they don’t know what’s coming up ahead. He adds, “Not that people shouldn’t complain—that’s why God invented the Internet—but I think we’d be better able to have that argument later. Sometimes we’re going in a different order or telling a different story. We think the story will all make sense at the end. Otherwise it will be eight wasted years.”

From what Benioff is saying, he is asking for trust from the ASOIAF-reading crowd that the cuts or shifts in the story will make sense. But having faith is tough for some fans whose favorite characters have already been reduced or cut. That’s a necessity of adapting a huge book series, but I don’t think the debate over whether they were right to cut or keep a character will end anytime soon. People will hope that a cut beloved character is going to show up, until the bitter end.