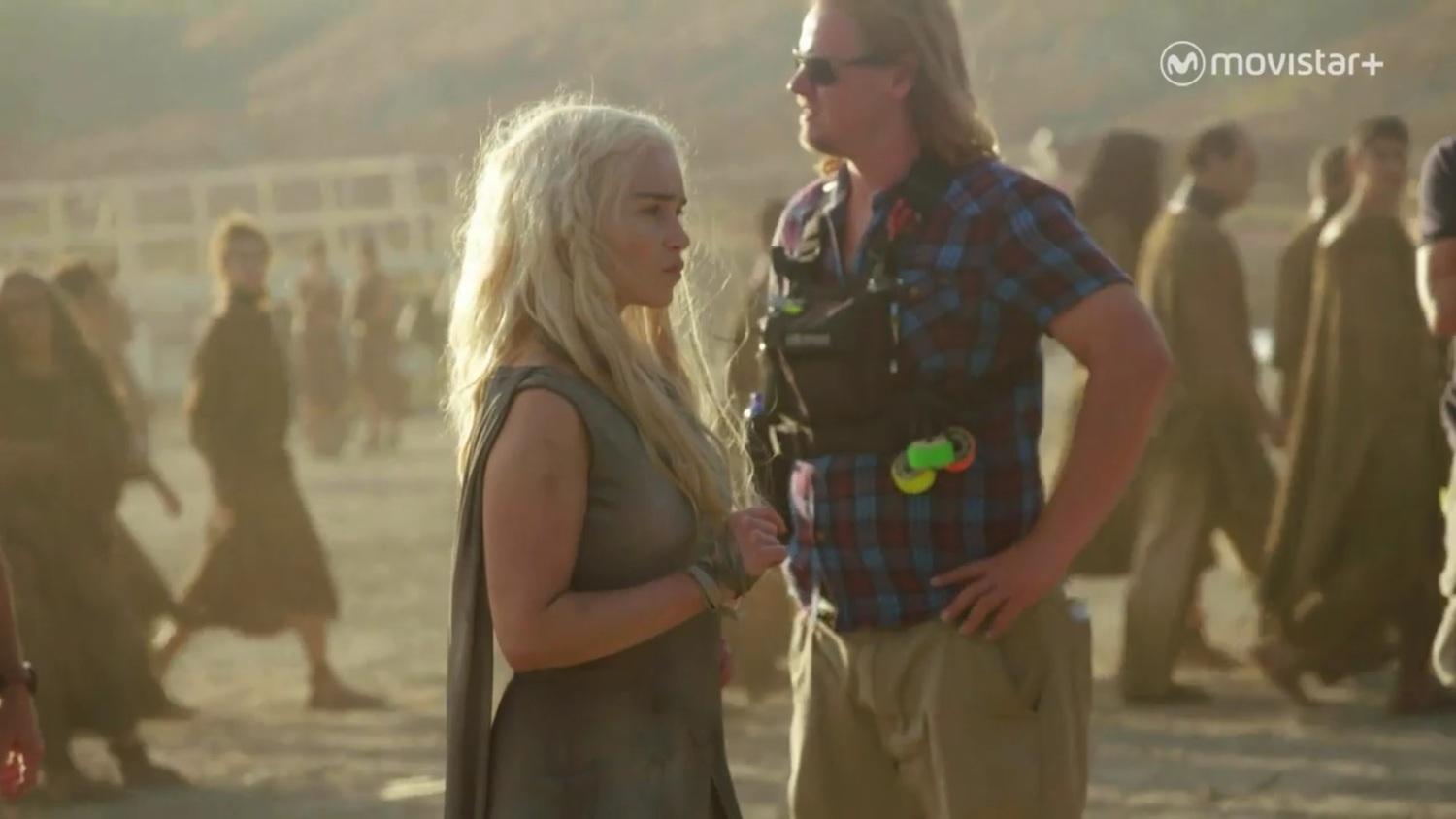 We have yet another season 6 treat this afternoon: a special featurette was released today, going behind the scenes of this season’s filming of Game of Thrones in Spain. The 3 and a half minute video was created for Spanish networks as a teaser for a longer behind the scenes feature that will air closer to the season 6 premiere, later this month.

The video takes us into the filming in areas such as Girona, Navarre, Peñíscola, Almería and more, and shares new cast interviews with stars such as Emilia Clarke, Peter Dinklage, Tom Wlaschiha, Isaac Hempstead Wright, Iain Glen, and Michiel Huisman. One hiccup: they’ve been dubbed over with Spanish, as you might expect. We’ll try to get a translation. For now, enjoy the sights and connecting the dots between locations, sets and locations of Westeros and Essos.

Update: A translation of the video is now available and posted below the cut!

Update #2: The captions have been added to a copy of the video and embedded below.

Be warned there is the potential for spoilers- we can see a few short scenes happening that do confirm some earlier set reports we received.

SerPodrick has provided a translation of the dubbed voiceover/interviews in the video, and given us permission to repost them here!

One of the best achievements of our show is the combination between what’s real and what’s not. That’s what distinguishes our show from a lot of things, because we try not to separate from reality.

Peter Dinklage: If everything was special effects, we would be on a set right now, instead of the meditarrean coast of Spain. We need this on our skin, the sun, the old castles built by the Moors. I have Spanish dust between my fingers right now. You can’t get that on a set.

Bernadette Caufield: Spain is so massive. Its locations, its views. We could do a kind of itinerant show this year. We had so many new worlds to visit, we went from the north side of Spain to the south.

Peter Welter: We started the trip in Girona. We were there for two weeks, in the city centre. Because Girona is a nice city, a really beautiful city.

No One: Yeah, we went to Girona. It’s a beautiful medieval city. A perfect setting for Game of Thrones.

Welter: From Girona we traveled west many kilometers to Bardenas Reales, a desert and mountainous landscape.

Emilia Clarke: In the show we see beautiful deserts. It was very funny, incredible. The last scene was a blast. Beautiful.

Welter: From there we went to Castillo de Zafra, in the middle of nowhere, in a place called the Spanish Siberia, because it’s one of the coldest places on Spain.

Isaac Hempstead-Wright: The location was absolutely unreal. It looked like a set. From that place you could see these huge plains, like the ones in Africa. It was the most incredible place that I could imagine working.

Welter: From there we went to Peñíscola. It’s an old coastal town. A rocky town located in the middle of the Mediterranean Sea. After Peñíscola, we moved here, the last place of the five in which we will work. But it’s not the last location, because we’re going to film in Almería, where we are right now. We have another five different locations.

Michael Huisman: I lost track of so many different locations. But each sequence of GOT has a couple of very stunning moments. And being here, on the outskirts of Almería has been for me one of these shocking moments.

Iain Glen: It’s been good coming back here. I never lose that thrill as an actor. I had it in a lot of movies. But in this show the level is exceptional. What the people built. The passion with which they work. And we have very committed extras.

Emilia: Last year, the level of extras we had here in Spain was amazing. This year happened again. I never met more hard-working people, happy about being there. They infect everyone on set. It’s a display of happiness, trust and security. It was a joy.

Welter: The show being back to Spain is very important for this country. Given the dimensions of GOT, everyone loves it, the people worked very excited. Wherever you go, that’s the way it is. And it’s a pleasure, a joy being part of it.

SerDuncanTheTall has added these captions to the video itself now for easier viewing: