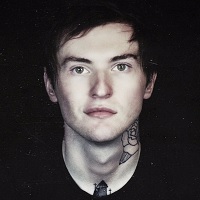 Hogan McLaughlin is a Chicago-based fashion designer, artist, and dancer. He began his professional career as a ballet dancer, performing with the internationally acclaimed Hubbard Street Dance Chicago, before pivoting into fashion in 2011, when he met and collaborated with artist Daphne Guinness. The collaboration ended up on display in the windows of the former Barneys New York, and at the Museum at the Fashion Institute of Technology, which immediately lead him to launch his first collection under his name. Since then, Hogan regularly shows at New York Fashion Week, has been profiled by The New York Times, WWD, Vogue.com, among others, and has had the opportunity to dress and create custom looks for a number of clients including Lady Gaga, Billy Porter, and Chrissy Teigen. As an illustrator, he has had the pleasure of creating promotional images for HBO’s Game of Thrones in multiple seasons of the DVD “Histories and Lore” features, as well as images for Showtime’s Penny Dreadful, and History Channel’s Vikings. Hogan has been contributing his costume analyses to WotW since Season 7 of Game of Thrones, and is excited to be back for House of the Dragon.