The Arianne Question | Watchers on the Wall | A Game of Thrones Community for Breaking News, Casting, and Commentary 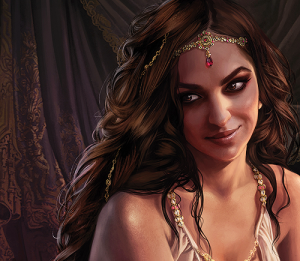 I’d like to start off by saying Thank You to all of you for giving us a chance to try and give you your Game of Thrones info fix the way we want to present it. I won’t sling mud or go into any wild, wacky details as to why the move was necessary for us, but… still. We appreciate you being here.

Water under the proverbial bridge. This is the now. As my brethren have already stated, we want to make this site into something every Game of Thrones fan will want to come to, so don’t be shy about recommending things you’d like to see.

Onto topic: This post is going to be a book-to-screen adaptation discussion. As such, we will be talking about many things that may spoil the books (and probably the show). Unsullied viewers are strongly advised not to read this or take part in the discussion that follows. It is for this reason that spoiler text will not be required in this thread.

(My original thought was to post this on our BRAND NEW FORUMS, by the way, but not enough people even know we have forums yet, and sadly, forum topics are not auto-announced on Twitter.)

We good? Good! On with the show!

As many of you know by now, the role of Arianne Martell—the eldest child of Prince Doran Martell and the heir to the Dornish crown—will be played by absolutely no one. Some fans are stunned by the omission; Arianne is very much a player in the game, one with her own distinct agenda. One would think that her plot, being a flawed failure, would play out quite wonderfully on television. Additionally, having Arianne would at least provide an opportunity to show more televised sex! A steamy scene or two with a wayward member of the Kingsguard seems tailor-made for this show. Why would HBO pass on that?

But let’s get one thing straight: Arianne is cut. The show is listing Trystane as Doran Martell’s heir. If Trystane is the heir, Arianne is gone.

So it begs the question: Why cut her?

I have a few theories.

One is the obvious: How much Dorne do you show? If they only have room for a handful of scenes featuring Dorne (quite possible with only 10 episodes per season), you have to choose the most critical scenes and see what else you can amalgamate. You need some sort of Crown Myrcella caper, else why have Dorne at all? You need conflict, and the situation provides that. Do you need Arianne for that? Not if her role in it can be given to someone else.

Also, there’s the question of character interest. Charisma. Is Arianne more interesting than the Sand Snakes? I personally didn’t think she was. Before the casting sides started leaking, I was worried that we’d have all the Sand Snakes amalgamated down to one—or worse, none. I personally prefer the Sand Snakes to Arianne (though not enough to cut her altogether). So if I do, other people might too, including the show runners.

Some people focus on the importance of Dornish female primogeniture, and that’s something, because I agree that is one very cool aspect of Dorne. The book plot to raise the banners for Queen Myrcella is a pretty major part of the story. No one considers female primogeniture a viable threat to the Iron Throne—except the Dornish.

In fact, I believe it’s so big that the television show is going to use it to Create a Moment on the show.

Can’t picture it? Hear me out.

The show has done it before; Creating Moments is kind of a television staple. They take something that in the source material is mentioned as rote, or even casually, and they gloss it up in some way.

Should Jon Snow merely find the dying body of Ygritte? NO! It’s better to see her take the arrow with his own big brown eyes!  Show us his pain!

Does it make a lot of sense to have Sansa change her hair color after she’s arrived at the Eyrie? NO! But she needs her staircase moment! Make sure the dress is awesome!

Did it work? In most cases, yes. The Jon/Ygritte scene was perfect, and the only people who bitched about the Sansa hair thing were book-readers. Most Unsullied either didn’t notice the hair color change, or thought, Well, she’s going out among the people of the Vale. Why not a change? Remember, in the book, Sansa’s hair change was about Baelish carefully playing the game, accounting for every minute detail. On the show, it was about transformation—and it put a nice little exclamation point at the end of Sansa’s season 4 arc.

(You could also argue that Baelish’s seeming lack of planning ahead in episode 8 was so that Sansa could have her Moment, and it somewhat weakened his own arc. That is true, and I didn’t like that he suddenly became sacrificially inept so that Sansa could come into her own. But—another television truth—sometimes the story arcs of lesser characters are sacrificed for the story arcs of “main” characters.)

This probably is a story arc thing. The television rule is that every (primary) character should have a beginning/middle/ending story arc per season. Character arcs make writers feel smart, and actors love them. Who doesn’t love a journey? Sadly, we will sometimes see logic or canon sacrificed all in the name of an arc. Did anyone wonder how the guards at the Eyrie simply allowed the departure of the Hound with Arya Stark? Did that make any sense whatsoever? Were they all so emotionally battered by the loss of their beloved (ha) Lady Arryn that they simply did not care any more? I guess it’s possible!

The logical conclusion, however, is that it simply did not fit into the beats of Arya’s arc. That, and there’s only so much time to show stuff in a 10-episode season. (In my headcanon, the Hound slew every guard at the Bloody Gate that attempted to stop him from leaving, because Clegane is awesome like that. Yes, he bloodied the Bloody Gate.)

Now we get the omission of Arianne. I have no proof as yet, but I believe this is to create a Moment, either for Doran or for Myrcella herself. (Television show Myrcella being older than book Myrcella, she may be more actively involved in her own plot.) If we are constantly reminded of a woman’s right to rule—which is what Arianne does, essentially—then the Myrcella plot won’t be a plot twist. They won’t have that big Moment. I honestly think they’re looking to play it out as a triumphant eureka! thing. Or at least the beginning of one.

“What the fools in King’s Landing do not yet understand is that we can crown Myrcella, Queen of the Andals and the First Men, and First of Her Name.”

Aside: No Quentyn? I believe Trystane is actually going to play the role of Quentane. I suspect he will be sent to marry Dany once the Terrible Thing happens to Myrcella. In this Shakespearean version, Myrcella (Juliet) may actually be killed, and then I think we’ll get to see Trystane (Romeo) get roasted. That’s how his arc ends: fatally.

(What? Myrcella could totally bite it. If they’re not casting Darkstar, someone competent may actually be swinging that sword!)

So then. Is this a good idea?

The one thing I am very confident of is that David and Dan aren’t closet misogynists who hate the idea of women ruling things.  I’ve met these bastards; I can’t say I know the inner workings of their evil hive mind, but even from my short contact I could tell they were keenly-intelligent and progressively-minded dudes.

They catch enough flak from people battering them about the whole Game of Rapes thing. They’re not going to change this very important plot point just because they think men are way awesomer. They’ll change it to try and make it hit harder.

Will it work? I have no clue. All I know is the changes will spur debate and disagreement amongst the faithful.

Sometimes that’s not a bad thing. But we will have to wait and see.

What do you all think?