Anatomy of a Throne: “Home” | Watchers on the Wall | A Game of Thrones Community for Breaking News, Casting, and Commentary 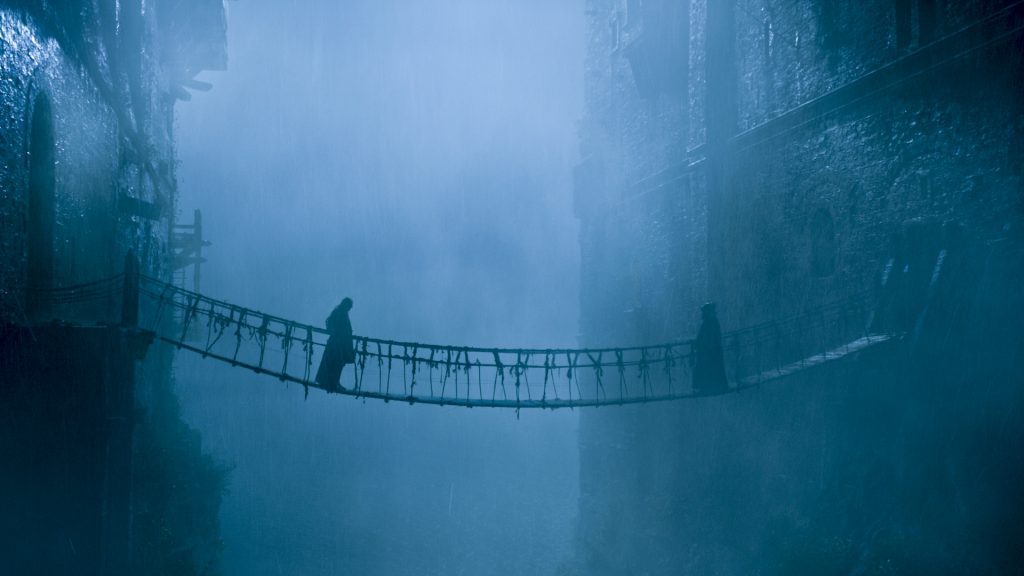 The death of King Balon Greyjoy happens mostly in the same fashion in A Song of Ice and Fire as in Game of Thrones – though Euron Greyjoy’s involvement is only hinted at and the death is ruled as an accident, thanks to the presence of a bad storm – but its placement is quite different: if showrunners David Benioff and Dan Weiss had adapted the scene in its original chronology, it would’ve occurred in the fourth season, with its after-effects playing out in season five, alongside Tyrion Lannister’s misadventures in Essos and Brienne of Tarth’s search for the wayward Stark daughters. Attempting to concentrate on only a handful of storylines any given year has, understandably, proven to be one of their biggest priorities (why, for example, the introduction of Prince Oberyn Martell was delayed from the third to the fourth season, to more closely align with the climax of his death).

Of course, the most important element of Balon’s untimely demise is the occurrence of a kingsmoot, and it is here where the divergence between page and screen becomes even more pronounced – though they occur, ironically enough, for the very same reasons as the depiction of Balon’s murder. 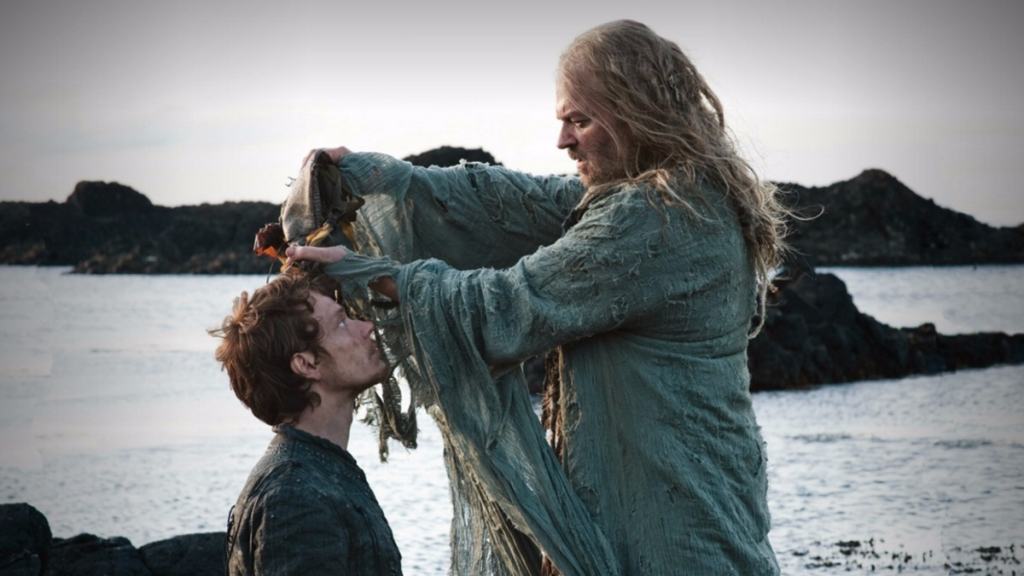 The central agent around which the plot of the kingsmoot turns is Aeron Greyjoy, called the Damphair, a religious zealot and literal born-again fundamentalist – 11 years previously, during Balon’s rebellion against King Robert Baratheon, his ship sunk and he was drowned, only to be resuscitated and purged of all his vanity and follies, dedicating himself fully to the Drowned God’s work. He is nearly wholly absent in Game of Thrones – as is, presumably, Balon’s fourth brother, Victarion, who is the captain of the Iron Fleet – though he makes his long-awaited appearance on-screen in “Home,” treating curtly with Yara Greyjoy on the matter of the royal succession. (He also had something of a proxy in “What Is Dead May Never Die” [episode 203], in the long-haired priest that re-baptizes Theon Greyjoy.)

“The Storm God cast him down,” the priest announced. For a thousand thousand years, sea and sky had been at war. From the sea had come the ironborn, and the fish that sustained them even in the depths of winter, but storms brought only woe and grief. “My brother, Balon, made us great again, which earned the Storm God’s wrath. He feasts now in the Drowned God’s watery halls, with mermaids to attend his every want. It shall be for us who remain behind in this dry and dismal vale to finish his great work.” 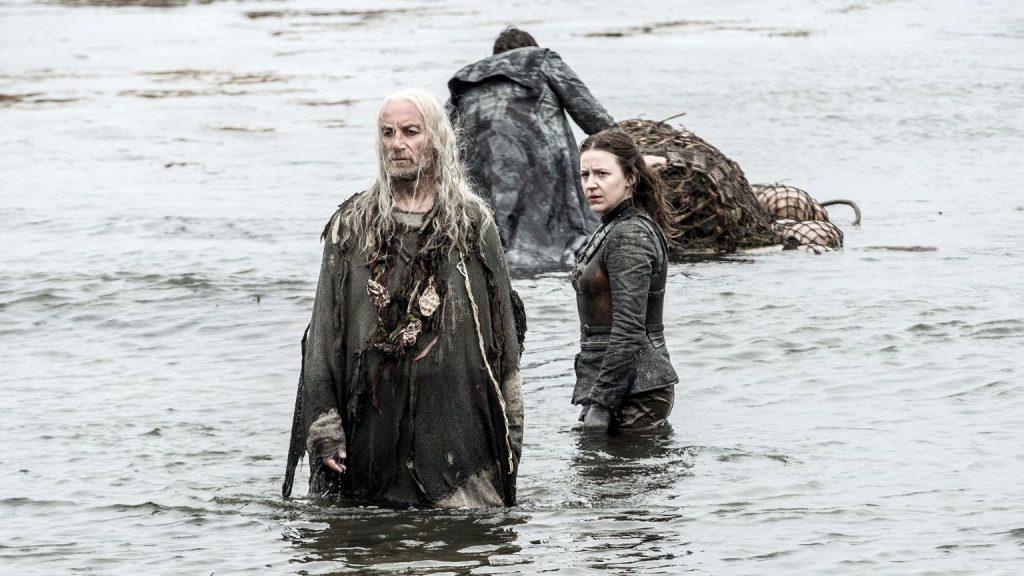 Aeron is even more dismayed to learn of Euron Greyjoy’s arrival the day after King Balon’s death, claiming the Seastone Chair for himself. That his timing is incredibly suspicious certainly raises eyebrows, but no more so than his simple, sadistic nature: Euron Crow’s Eye was banished two years previously by Balon, who “swore that it would be his life if he returned” – truly a remarkable feat, given the violent nature of the ironborn to begin with.

It is as clear as day to the Damphair that only a godly man may sit the Seastone Chair, which immediately precludes Euron – since the Crow’s Eye “worships naught but his own pride” – but there is no good solution as to how to deny him the succession. According to the customs of the mainland Westerosi, the throne would pass to Theon, and then to Asha (who has, of course, been renamed Yara in the HBO series), but this solution is riddled with problems: Theon has been corrupted and made soft by his time with the Starks (and this is even before they learn of his transformation into Reek); Asha is a female, and no “scheming woman” has ever led the Iron Islanders; and, finally, the green landers’ laws are primitive and weak and wholly beneath God’s chosen people, at any rate. And should Aeron openly advocate for Victarion, who he believes is the only logical candidate for the coronation, there may be a civil war that follows – and religious law dictates that no ironborn may spill the blood of another (though drowning each other is okay, since every god everywhere has his technicalities). 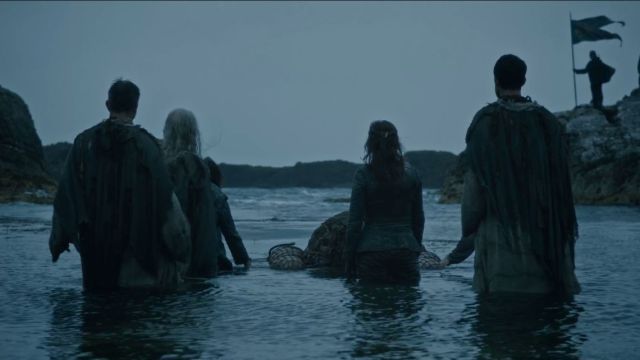 To complicate matters further, Asha returns from her campaign on the mainland and immediately makes her own claim to her father’s throne, as that was his expressed wish (a wish that was also made clear to Aeron, even though the priest dismissed it then, as well). Desperate to discover the way forward, the Damphair crawls into his makeshift shelter that his drowned men have fashioned for him on the beach and attempts to fitfully sleep. When he cannot take it any longer, he awakens in the middle of the night and goes for a naked swim in the frozen ocean, allowing the waves to push him under the water until he feels that the Drowned God has enveloped and spoken to him.

The next morning, Aeron Greyjoy stands atop a rounded granite boulder three feet from the water’s edge and proclaims the gospel of his god’s wisdom to a small gathering of religious devotees and local lords: it is time for a kingsmoot.

[The local lordling] gaped at him. “A kingsmoot? There has not been a true kingsmoot in…”

“…too long a time!” Aeron cried in aguish. “Yet in the dawn of days, the ironborn chose their own kings, raising up the worthiest amongst them. It is time we returned to the Old Way, for only that shall make us great again.” […] He raised his bony hands on high again. “Listen! Listen to the waves! Listen to the god! He is speaking to us, and he says, We shall have no king but from the kingsmoot!”

A roar went up at that, and the drowned men beat their cudgels one against the other. “A kingsmoot!” they shouted. “A kingsmoot, a kingsmoot. No king but from the kingsmoot!” And the clamor that they made was so thunderous that surely the Crow’s Eye heard the shouts on Pyke, and the vile Storm God in his cloudy hall. And Aeron Damphair knew he had done well. 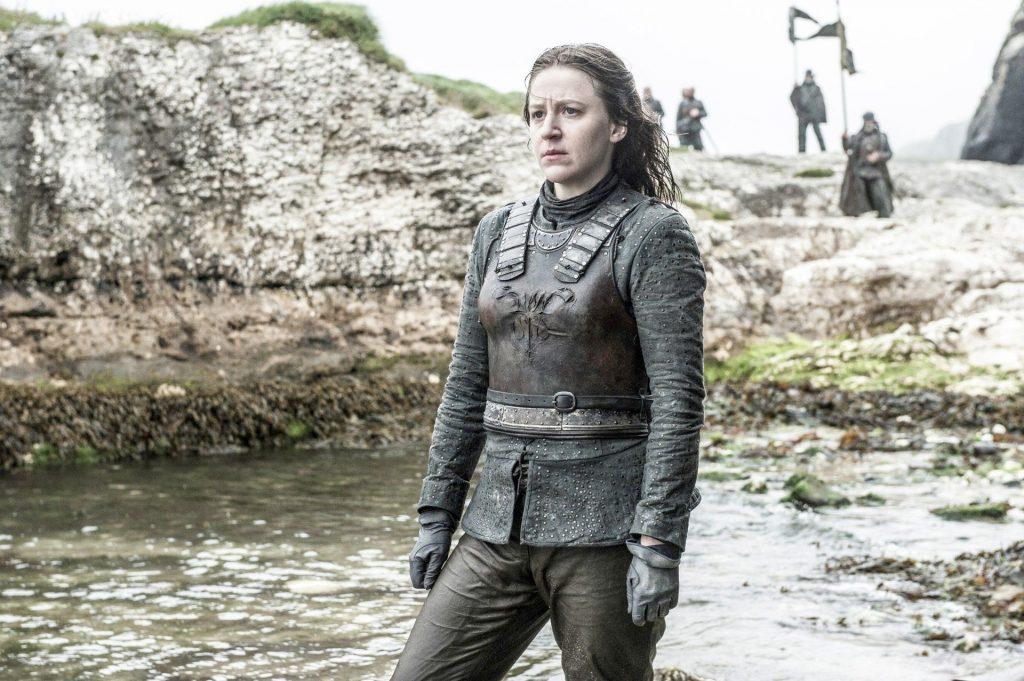 The introduction of the kingsmoot couldn’t be any more straightforward in Game of Thrones – rather than being an outdated, outlandish custom that must be forced back upon their people, it is presented as an everyday affair, the standard practice of selecting the next monarch (“Your father does not get to choose,” Aeron tells Yara. “The law is clear”). There is certainly much storytelling efficiency to this approach, allowing Weiss and Benioff to focus most of this season’s narrative on what direction the ironborn will take under their new ruler as opposed to concentrating on the nature of the succession itself, but it still does seem to be out of place with the series’s continuity and the world’s mythology: if Balon is the first king to rule over the Iron Islands for the past 300 years or so, when Aegon Targaryen arrived and forged all seven kingdoms into the Seven Kingdoms, how would the kingsmoot be considered so commonplace as to be self-evident? Perhaps the Thrones Damphair has decreed the democratic gathering just as his Ice and Fire counterpart did, and Yara is more angered at the slight than shocked that an ancient tradition is being foisted upon them again; perhaps the nature of this kingsmoot (and Aeron’s identity as Yara’s uncle and Balon’s brother) will be addressed in subsequent episodes, when the event actually takes place.

Regardless, it’s obvious that the dramatic heart of the scene is meant to be Yara herself, one of our familiar faces over the past five years, and not the world-building turn of events that George Martin so prized in his two most recent novels. Just earlier in “Home,” the character was battling with her father over dropping the war against the north – and, in the seasons before that, over using their scant resources to attempt a rescue of Theon – and now she is battling with the rest of her family to preserve his will. What was previously an interpersonal conflict has now been transformed into a societal one, as Yara struggles to convince a majority of her peers that voting a woman into royal office is more an affirmation of their future than a repudiation of their past – what Benioff and Weiss always attempt to do with their various story threads, whether they ultimately prove to be successful in their character-focused endeavors or not.

You can view all previous Anatomy of a Throne posts here. Or you can peruse my new column, It Is Known, here.