Anatomy of a Throne: “The North Remembers” | Watchers on the Wall | A Game of Thrones Community for Breaking News, Casting, and Commentary

Note from the author: well before I found my way to the Wall, I had envisioned Anatomy of a Throne as an irregular feature back during Game of Thrones’s second season for Comic Related, a site that I regularly contributed to at that point in my (relatively) nascent freelancing career. I ended up moving on not long after that; over the course of the next few years, two different sites would call the column home, with the last being, of course, Watchers on the Wall.

While Anatomy is as dead as a doornail until George R.R. Martin finishes The Winds of Winter, not many current readers/viewers have probably been exposed to those early, tentative days – and, well, we are in the middle of a rather in-depth stroll down memory lane, which makes the occasion perfect for a re-visitation.

Here, then, is the very first installment of the column I ever did, for the second season premiere, “The North Remembers.” I will follow this up with the six subsequent Anatomies of a Throne that were originally published over at Comic Related as we continue to work our way through the second and third seasons – and, who knows? Maybe I’ll even throw in a new, exclusive surprise or two. 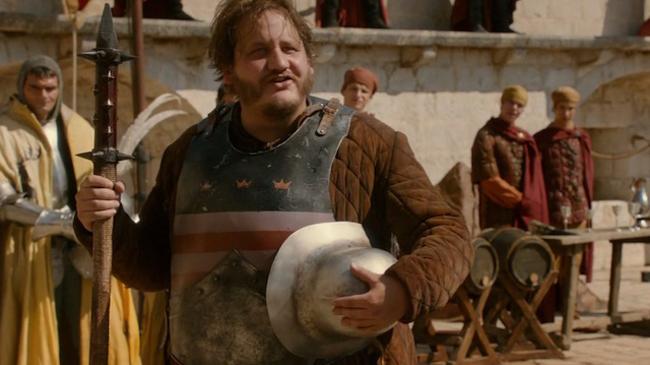 The single biggest difference between the books and the episodes is simply the scaling back of complexity, which is, obviously, due to the demanding rigidity of television. If a scene in the novel consists of 10 lines of dialogue, its equivalent on the screen contains only five (say, for instance, Lord Eddard Stark and King Robert Baratheon conversing down in Winterfell’s crypts [episode 101, “Winter Is Coming”]). If it features two dozen characters in the original version, there are only four or five in the adaptation (Robert’s ill-fated boar hunt [“A Golden Crown,” 106]). And heaven forbid there are any horses involved, as they will be cut no matter how illogical it may be to not include them (Tyrion Lannister and his pet sellsword, Bronn, meandering through the Mountains of the Moon being a prime example [“The Pointy End,” 108]). 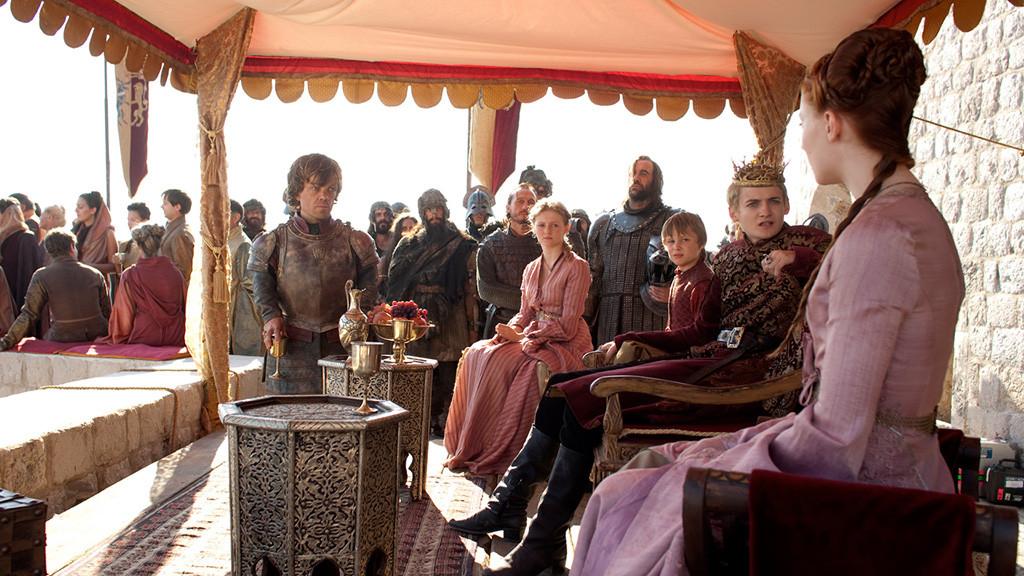 The filmic version of the tournament held in honor of King Joffrey Baratheon’s name day is affected in every shape, way, and form by all of these restrictions – on screen time, on the production schedule, on the budget. Yet, unlike some of the examples listed above – and a score of others unmentioned – the scene is not impacted in any significantly negative way, great or small (though the omission of face time for any character is always felt and oftentimes sorely missed, even if it is just a few lines of dialogue between Tyrion and his innocent little nephew). In fact, thanks to some clever tinkering by showrunners David Benioff and Dan Weiss, the excess fat (for television) is all neatly tucked away without missing a single dramatic beat.

It all starts with the basic conceptualization of the scene itself. On the page, it is a joust that the adolescent monarch receives; for the visual rendition, it’s a melee, which requires a lot less in terms of set dressing (particularly when a wonderful location is scouted out and properly utilized) and that all-too-expensive of commodities called horses. The book makes it a point to include only a small number of spectators, which complements the location’s physical dimensions and visual flair nicely. The only real deficiency is the loss of the Imp’s grand entrance, on his steed surrounded by his sellswords and barbaric tribesmen and under the just-raised inner portcullis, but this is leveled out by the inclusion of the location’s lower courtyard, onto which a combatant is dropped to gruesome effect. 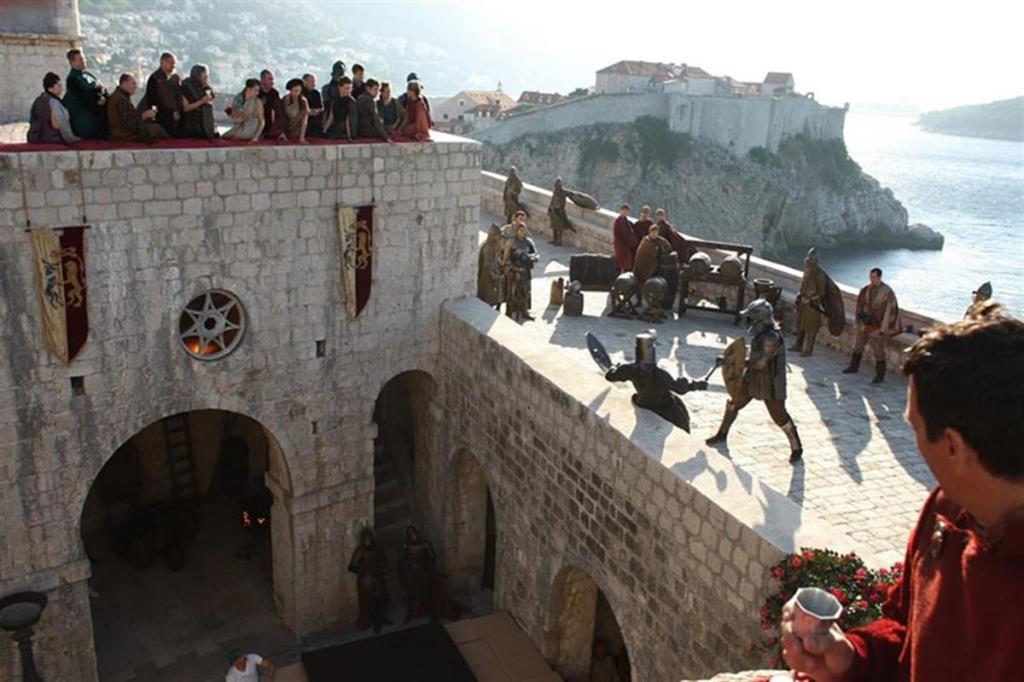 (An argument can be made about the gratuitous inclusions of dramatic falls and possibly-over-the-top puddles of blood – the novel doesn’t feature any comparable injury, let alone death, in the joust – but one could also maintain that the choreography reflects the sadistic nature of Joffrey’s psychology [he does muse over making the victor fight to the death in the book, after all]. It also provides for a comical runner throughout the remainder of the episode, which never hurts for a series that has been chided in the mainstream press as featuring “overwhelming solemnity.”)

Then there’s the combatants. On the page, there are three rounds with nearly nameless individuals, tertiary characters that have only the occasional line of dialogue – with only one or two possible exceptions. The HBO series reduces this to one contest and replaces the background figures with none other than Sandor Clegane, better known as the Hound, Joff’s sworn shield, in an effort to explore (and have the audience identity) that handful of core characters that will go on to impact the show’s overarching narrative (though, to be fair, the original version does include Ser Meryn Trant, another member of the Kingsguard, as a participant; the Hound flatly states that it “wouldn’t be worth the bother of arming” himself, since “this is a tournament of gnats”). It is a move made all the more deft since Clegane’s character arc was essentially gutted in the show’s first season – a quirk of the adaptation process that Weiss and Benioff have promised to rectify this year, although it is unknown how successful the Hound’s filmic rehabilitation will be. 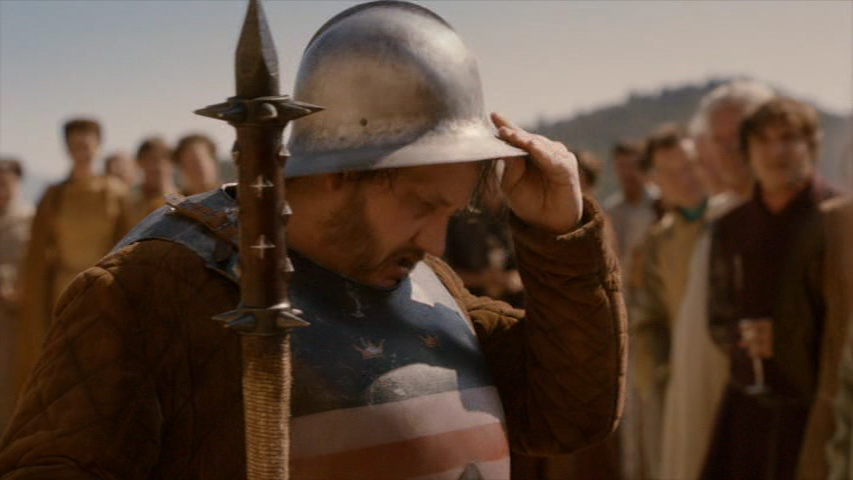 What just may be the scene’s biggest change, however, revolves around Ser Dontos the Red, of House Hollard, a brand-new character in the novels. The notes are all the same: he is called out, is too drunk to fight, and is threatened with death by King Baratheon, only to be saved by the Lady Sansa. But the melody they weave is all the world different, starting with his stallion trotting out on the field riderless:

The knight appeared a moment later, cursing and staggering, clad in breastplate and plumed helm and nothing else. His legs were pale and skinny, and his manhood flopped about obscenely as he chased after his horse. The watchers roared and shouted insults. Catching his horse by the bridle, Ser Dontos tried to mount, but the animal would not stand still and the knight was so drunk that his bare foot kept missing the stirrup. […] Finally Ser Dontos the Red gave it up for a bad job, sat down in the dirt, and removed his plumed helm. “I lose,” he shouted. “Fetch me some wine.”

It is, needless to say, a hideously funny moment in the book – in all the books, with their nearly 5,000 pages. It promised to be one of the more dynamic moments to be played out on the small screen, alongside the murders and battles and sex scenes. It also had “HBO explicit” written all over it… and yet the showrunners opted to cut the gag entirely – indeed, to cut the humor almost completely – and instead focus on a more down-to-earth interpretation of the character. (Whereas his entrance was toned down, however, the nature of Ser Dontos’s death sentence was certainly played up; Joffrey orders up a cask of wine from the cellars to see him drowned in it, though his guards don’t have the chance to even lay a hand on the knight before Sansa – and the Hound – talks him out of his murderous flight of fancy. It plays out obviously and decisively different on the show, though its source of inspiration is hard to miss.)

Of all the edits and omissions thus far, Ser Dontos and his skinny, pale legs may be the most trifling, if not also one of the most lamentable. But at least it is superficial rather than structural, (mostly) aesthetic instead of (overtly) substantial.

And it gives us a very good compass of the balance between humor and gristle, gratuitousness and relevance to go by as we just start to delve into Game of Thrones’s second season.