Anatomy of a Throne: “Sons of the Harpy” | Watchers on the Wall | A Game of Thrones Community for Breaking News, Casting, and Commentary

Note from the author: in my continued effort to get back up to speed with the television series, this week’s episode, “Kill the Boy” (505), will be published later today. In the meantime, please to enjoy our dissection of last week’s installment, “Sons of the Harpy” (504).

Episode: “Sons of the Harpy” (504)
Scene: Rearming the Faith Militant

Warning: there is material in this article that some may regard as spoilers, given that chapters from the books are discussed in depth, and some of the elements from them may yet appear in future episodes. Proceed with caution.

The scene in which Queen Regent Cersei Baratheon and the High Septon meet to create the Faith Militant combines two of Game of Thrones’s biggest adaptation strategies: it streamlines (and reorders) the storylines from the source material, generally, while also tweaking the mechanics of the scene itself, specifically. 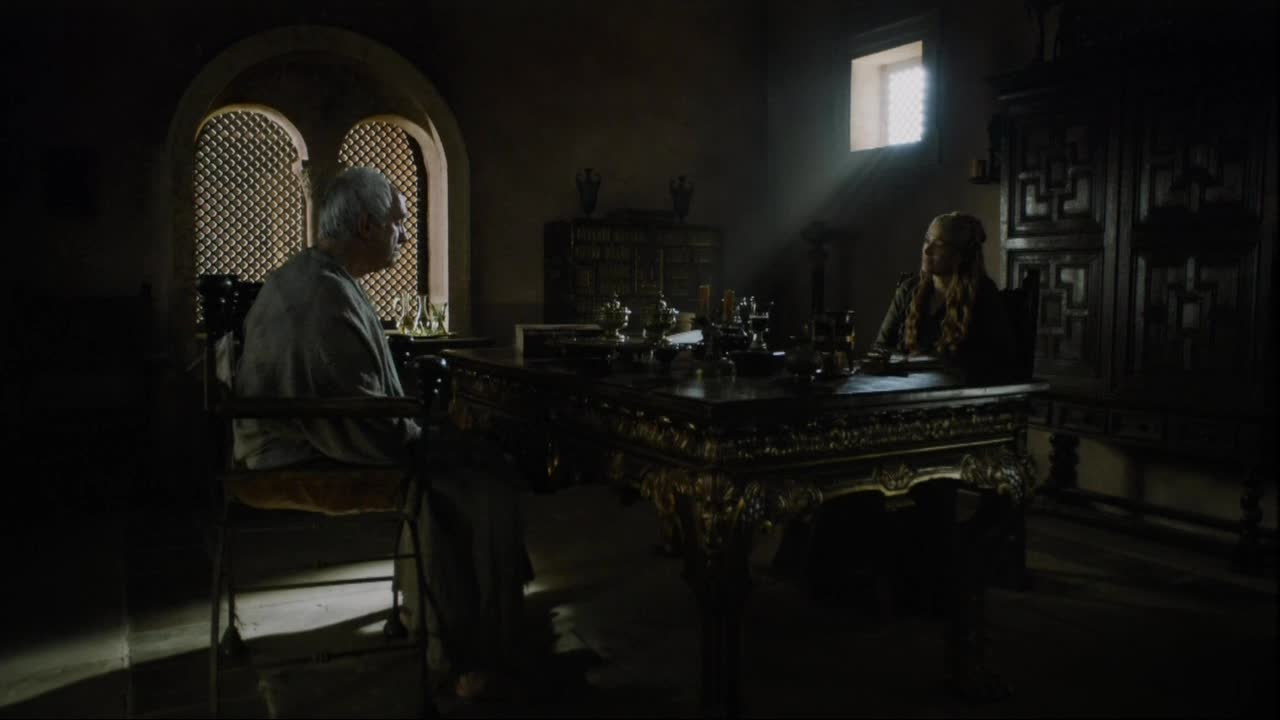 It also demonstrates to what degree showrunners Dan Weiss and David Benioff have fundamentally changed Cersei’s character (while maintaining her original trajectory and outward affectations, it must said): in the novels, she is portrayed as being at the mercy of external events (at least, in regards to this particular situation), with her attempts at controlling them arguably fueling her greater victimization at their hands; in the series, the queen is the prime mover, the active force that is setting up and causing the events around her (again, at least in this particular scenario).

This is how it plays out in A Feast for Crows: Cersei is greatly vexed by the current High Septon (first seen in the show in “Second Sons,” episode 308), who was selected by Tyrion Lannister when acting as the Hand of the King and who has recently obtained some rather damning evidence from the born-again Lancel Lannister, the queen regent’s cousin, erstwhile lover, and co-conspirator in the murder of King Robert Baratheon (“You Win or You Die,” 107). Finding this an unacceptable risk, she has the septon killed in his sleep. (The scene in which Game of Thrones’s High Septon is chased out of a brothel [“High Sparrow,” 503] is largely taken from a story Cersei hears about the sparrows chastising a huge score of corrupt septons.) 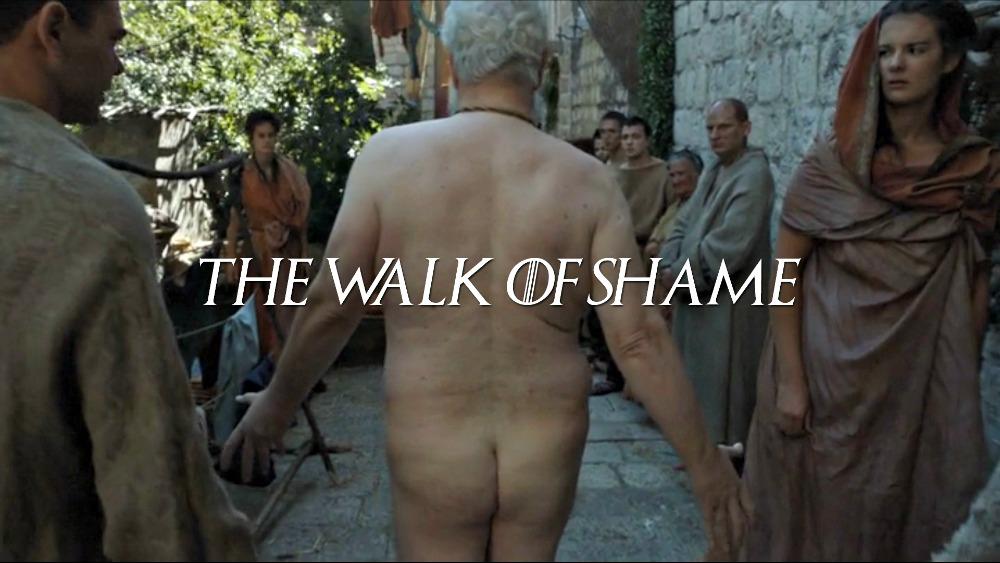 This being the world of George Martin, however, the act has hugely unintended consequences. The new High Septon is almost literally forced upon the Faith by the so-called sparrows that have started to descend upon King’s Landing en masse, choking out everyone and everything by their extraordinarily large numbers (and the crude cudgels and axes they brandish, which they swear is only for self-protection in a realm that has totally given itself up to wanton violence in the wake of the recent war). This High Septon gives a new definition to religious extremism, forcing all the septons to give away their shoes and sell all their valuables – including the hideously expensive and ornate crown that Lord Tywin Lannister had made for the previous officeholder. Even worse, he refuses to bless Tommen Baratheon as the new king (“The blessing was an empty ritual, [Cersei] knew, but rituals and ceremonies had power in the eyes of the ignorant”) and forces the queen regent to come to him at the Great Sept of Baelor instead of doting on her at the Red Keep. “This is what comes of letting fools and cowards rule themselves,” Cersei tells herself on the way to meet him for the very first time. “Next time, I will choose their master for them.”

When she enters the Great Sept, she finds a goodly number of the venerable holy brothers dressed similarly to the sparrows and on their hands and knees, scrubbing the floor, including a sycophant septon and, of course, the High Septon himself. Martin spends some time describing His Holiness’s appearance, so it certainly bears repeating here. He is several inches shorter than the queen and is “as thin as a broom handle.” What’s more: 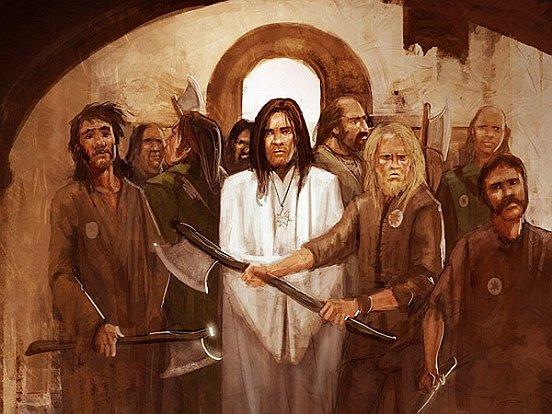 At Cersei’s urging for some privacy, they move into the heart of the sept and kneel at the altar of the Crone, one of the seven gods (and a probable insult to the queen regent, though it goes right over her head). After he’s done praying to the goddess, the High Septon remains on his knees, forcing Cersei to do so, as well, with the entirety of their conversation playing out in this position of supplication. “A small man’s ploy, [Cersei] thought, amused.”

What proceeds continues to throw Cersei for a loop. Thinking that the septon is withholding his blessing of Tommen as a shake-down for money – the queen, in her infinite wisdom as the unchecked sovereign of the Seven Kingdoms, has withheld the crown’s repayments to both the Iron Bank of Braavos and the Faith in order to build a new fleet of warships that would be loyal only to her – but, it turns out, he’s “merely” concerned about the lack of protection that the buildings and people of the Faith have in the realm. Cersei instantly jumps on this, saying she’ll gladly have her son overturn King Maegor Targaryen’s law from nearly three centuries before prohibiting the church from having its own armed forces – in exchange for Tommen’s blessing and the complete forgiveness of the royal debt (which is nearly one million golden dragons). The High Septon makes a show of agreeing to the terms (all that money could easily go to feeding the hungry and giving shelter to the homeless, after all), but, in the end, he is only too happy to have the Faith Militant back on the streets of Westeros.

When Queen Cersei, for her part, walks away from the meeting, she is convinced that she’s finally demonstrated how much smarter than either her brothers or her father she really is; she not only has saved the Iron Throne heaps of money and secured her son’s legitimacy as the new monarch, she also has managed to disperse the throngs of the filthy, stinking sparrows from King’s Landing and, what’s more, set them loose as yet another force to hound King Stannis Baratheon and his foreign god. The potential dangers of overturning a deeply entrenched historical precedent is not only completely lost on her, she would scarcely care even if they did register. 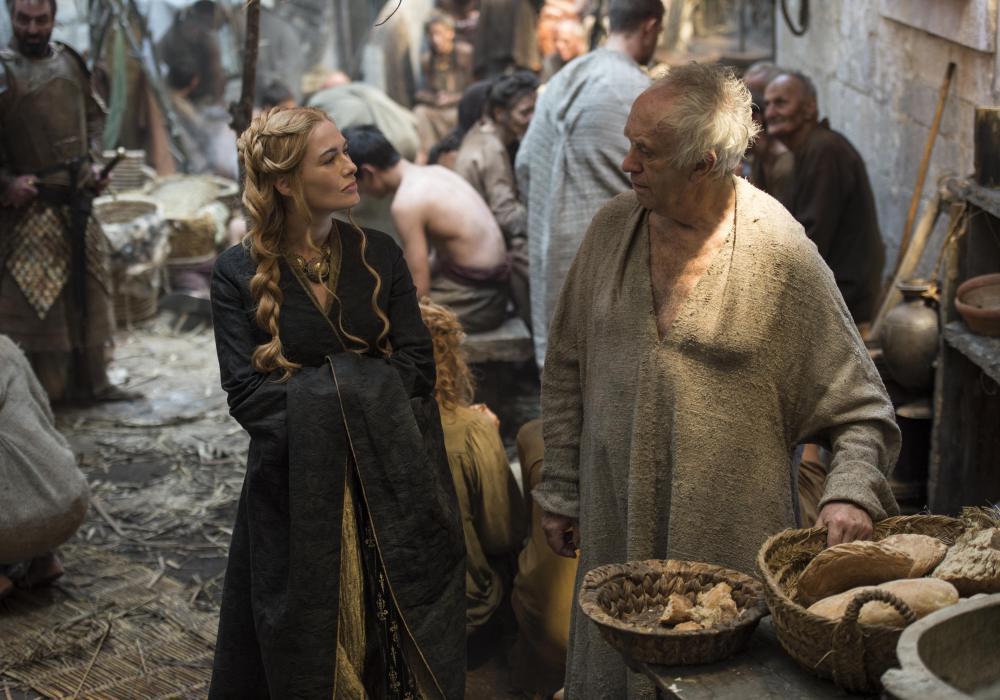 The show’s version features a High Septon that is extraordinarily different in personality, if not in appearance, not least of which because he doesn’t speak in the third person once he is “crowned” (which itself is at the direct behest of Cersei, introducing her more active role in this particular storyline): he is gentle instead of stern, grandfatherly instead of severe, and gracious instead of sanctimonious, coming to Cersei’s quarters instead of dragging her out across town (and thereby saving the producers much money in the process, from the lack of exterior shots [probably taken on location, which is itself an extra financial burden] to the absence of the several dozen extras that are in the background of the original version). However, he is still, of course, a deeply pious man, from his bare feet to his refusal to either wear the vestments of his newfound office or to drink wine.

Why such changes? Speaking in terms of just the two specific scenes that the character has been in thus far, the showrunners are probably engaging in one of their favorite adaptation pastimes: making their cast as well-rounded as possible, either because they’re afraid the harsher edges would turn off the audience’s empathy spigot (which is why both Cersei and Tyrion have been stripped of nearly all their nastier, more hostile qualities) or because they simply wish to engage in a bit of three-dimensionality (such as Stannis’s rather moving [well, comparatively] scene with his daughter in this episode), a practice which comes to them more naturally thanks to the absence of Martin’s strict POV literary structure. There’s also the little fact that this version of the High Septon had tacitly approved, if not directly orchestrated, the rather severe treatment of his predecessor, even going the extra mile of having him paraded naked through the streets; his extremist bona fides, thus, have already been established.

In “Sons of the Harpy,” it is Cersei who brings up the violence being perpetrated against the Faith, not the septon, and the fact that money isn’t even mentioned in passing should come as no surprise, as debt has been nearly completely removed as one of the main concerns plaguing the queen regent throughout the season (thus far, at least). Both deviations allow her predominant storyline – competing with Margaery Tyrell for control over Tommen – to be firmly entrenched in the viewer’s mind, which has been yet another hallmark of Benioff and Weiss’s approach to the material over the past four years: simplification and straight-forwardness. The scene’s last major alteration – the apprehension of Ser Loras Tyrell for “crimes against the gods” – only serves, as such, to reinforce this plot thread. 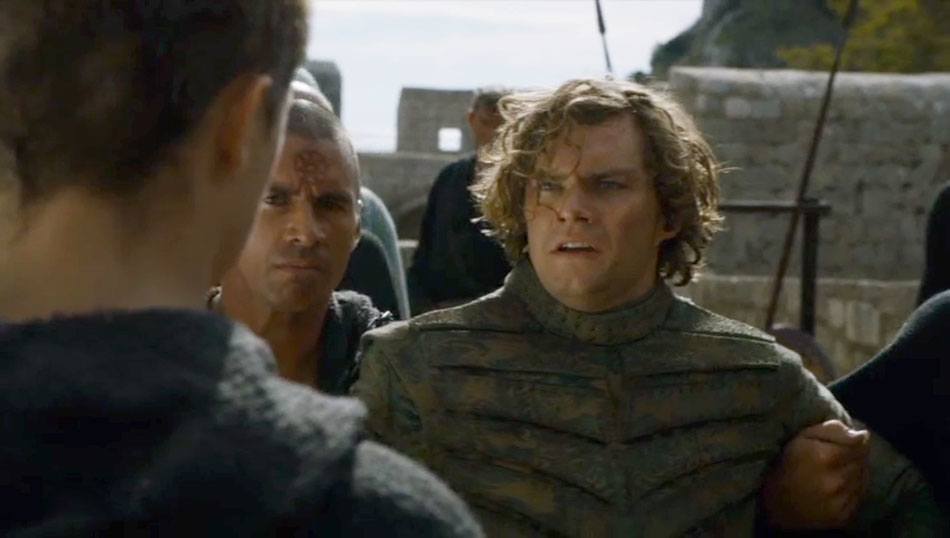 One last note should be made regarding Queen Cersei and the High Septon’s history-overturning meeting. Although there are several subtle differences in Cersei’s demeanor from the page to the screen, such as the lack of impatience or other forms of passive-aggressiveness, the single biggest change is simply the lack of her internal monologue, which unmistakably frames each and every word with a resentment that is surprising in both its depth and breadth (another classic example from the scene in question, when the septon says he needs to fast and pray until the gods have spoken to him: “Cersei itched to slap his solemn, pious face. I could help you fast, she thought. I could shut you up in some tower and see that no one brings you food until the gods have spoken”). Since Lena Headey must perform for the benefit of the other actors as well as the camera, such internal intricacies are largely, if not completely, lost – although their absence doesn’t, by any stretch, negate their existence in the character’s psychology. The same must be said for Jonathan Pryce’s High Septon, who may very well prove to have the same convictions as his literary counterpart – just only realized internally.

For the time being, that is.