Anatomy of a Throne: “Kill the Boy” | Watchers on the Wall | A Game of Thrones Community for Breaking News, Casting, and Commentary

HBO’s Game of Thrones (typically, and before this current season) brandishes a consistent and high degree of fidelity to the nearly 5,000-page-long source material of George R.R. Martin’s A Song of Ice and Fire novels, but there still, of course, are differences. While most of these gaps from the page to the screen are small and detail-oriented, it is nonetheless the case that the most subtle discrepancies often hold the biggest insight into the adaptation process, into the demands of filmmaking, and into the rigors of the literary narrative. This, then, is the anatomy of a key scene of Thrones – not because of its dramatic importance or visual effects whizbangery, but because of the telling nature of its realization.

With the Sons of the Harpy continuing to expand their insurgency, Queen Daenerys Targaryen turns to the counsel of a trusted friend on the best way to proceed – a path, as it turns out, that includes marrying one of the longest-running families of Meereen to try and further reconcile herself with her new people’s culture. The object of her plan is none other than Hizdahr zo Loraq, an extraordinarily wealthy noble who wishes to reopen the city’s fighting pits. 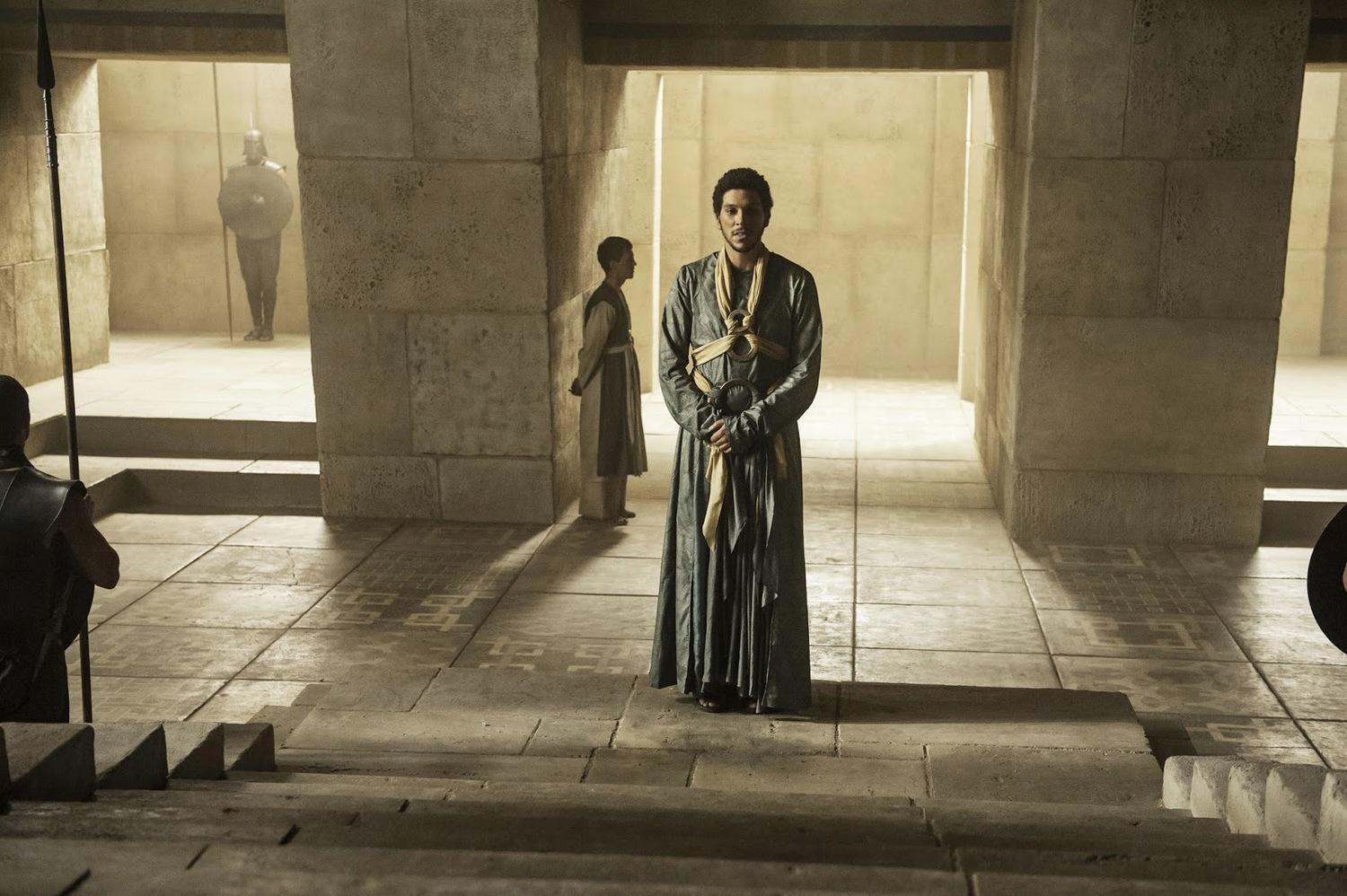 This is where the similarities between A Dance with Dragons and Game of Thrones ends, and their differences begin with this one single fact: the former’s version of events may be far more detailed and, perhaps, nuanced, but the latter’s is far more dramatic and, therefore, interesting. The alterations begin with Hizdahr himself. In the television series, he is rather flat, straightforward, no-nonsense – a former Great Master who ultimately finds himself becoming Daenerys’s ambassador to the slave city of Yunkai and, shortly thereafter, a member of her Meereenese small council. (He is also introduced far earlier in the story, when Dany first marches upon Meereen [“Breaker of Chains,” episode 403], cementing his relationship with both the audience and the queen earlier in the narrative.) 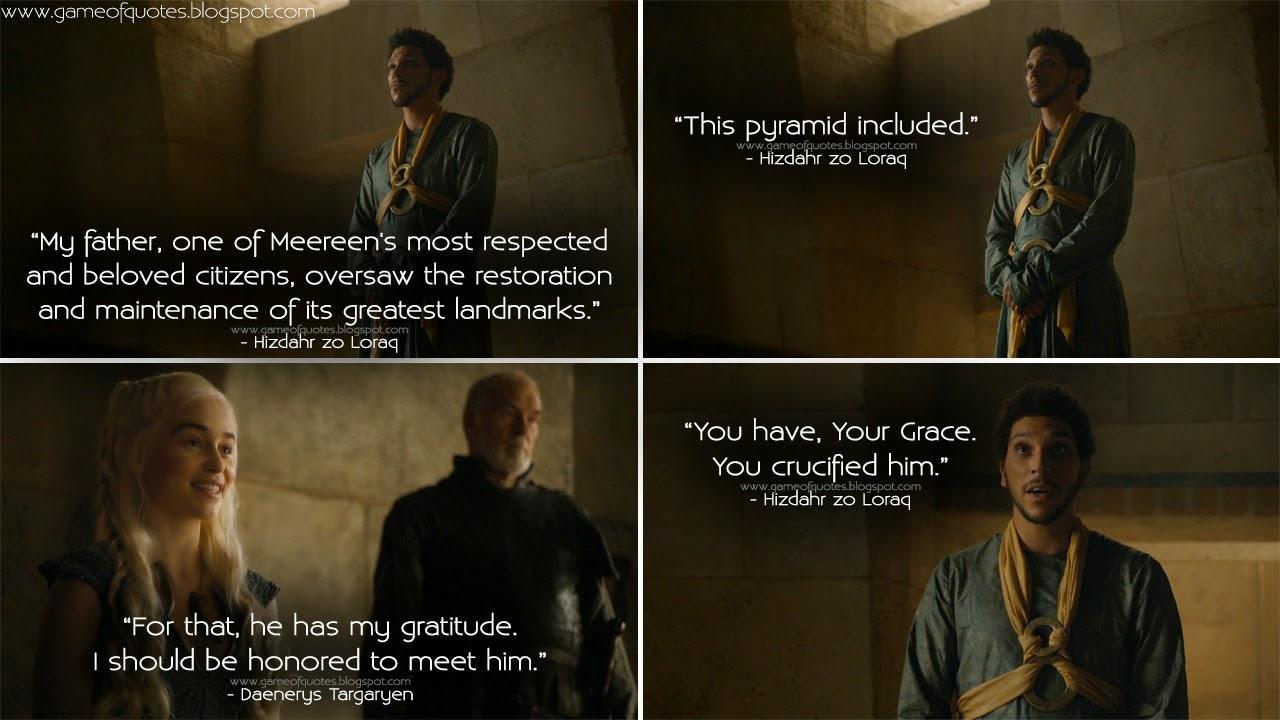 In the novel, he is merely a noble businessman, buying the city’s fighting pits at a reduced price after the Mother of Dragons orders their closure and, thereafter, endlessly petitioning her to reopen them, to continue the traditions of a people that sees her mostly as a savage foreigner (and also, it goes without saying, to make an obscene amount of money – which is quite the opposite of wanting to reopen the pits to secure a political bargain with one of Meereen’s sister cities). And although Hizdahr’s role in the story is much more constrained on the page than it is on the screen, his character is far more dynamic – funny, well-spoken, refined, engaging. It’s hard to think of a character who has changed as much in the adaptation process (relative to the amount of screen time he’s had, that is to say). The nature and role of the trusted friend is also considerably divergent. Rather than introducing yet another new character for Dany to interact with, showrunners David Benioff and Dan Weiss opted to yet again simply reuse the show’s core cast, both regular and recurring (a decision which is entirely in keeping with literally every one of the previous 44 episodes); thus, it is Missandei, a long-standing presence on the show (she was first introduced in “Valar Dohaeris” [301]) and the only remaining servant to the queen (quite unlike Martin’s version of the story, which sees all of her Dothraki handmaidens still present), who advises Daenerys on the best way forward. What’s important to note here is how the former slave girl manages to prod her liege into marrying into Meereen – which is, essentially, only inadvertently. By telling Dany that she often sees a path that no one else can, it sets off the epiphany within the queen, moving her into action and, thereby, making her the master of her own fate. 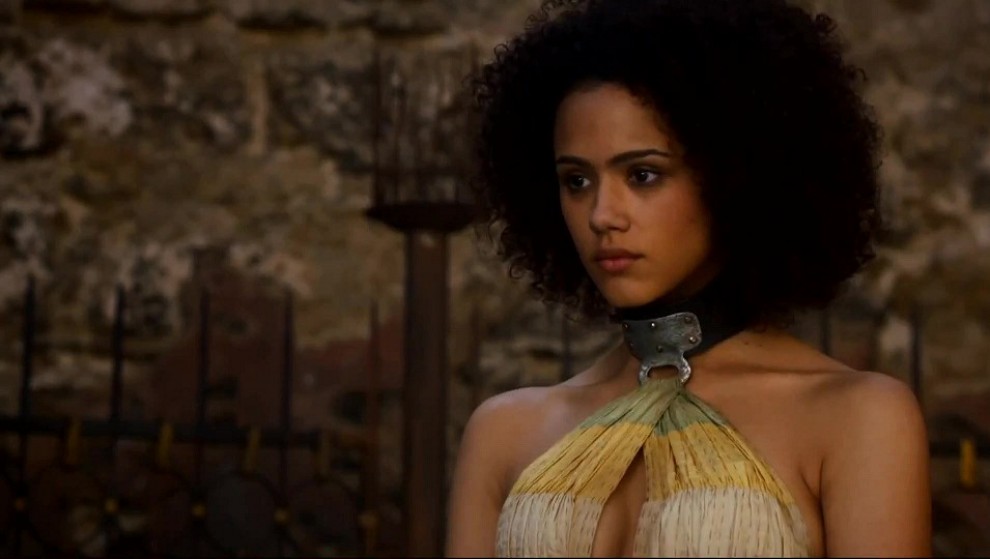 It is, needless to say, exactly the opposite situation in the source material. The Mother of Dragons is visited by a high priestess of Meereen, a venerable older woman whom Daenerys has come to implicitly trust. After noting the ever-more-deteriorating situation in the Meereenese streets between the insurgents and the Unsullied (along with other, newly-minted occupation forces that Weiss and Benioff chose to keep on the cutting room floor), this advisor promptly suggests that Dany marry into one of the noble families, and to do so fast. She even has the perfect candidate picked out and, what’s more, has brought him along to help convince her of the proposition. In this way, of course, all agency has been squarely removed from Dany, which makes her more of a reactive character rather than a proactive one (a situation similar to Queen Regent Cersei Baratheon’s predicament in the previous episode). Then there’s the background action leading to the marriage proposal. In the book, Daenerys’s chosen course of action is to collect “wards” – read: young children – from each of the great families of Meereen to officially act as cupbearers and servants but, in reality, to serve as hostages to guarantee the nobles’ good behavior; should the Sons of the Harpy continue their campaign of terror, the queen will execute her young charges (which is precisely the same scenario behind Theon Greyjoy’s presence at Winterfell for the decade before the series starts). Of course, once it’s made clear that the killings haven’t been affected in the slightest, Dany can’t bring herself to actually take the lives of her innocents, which helps push her into accepting the idea of marrying Hizdahr zo Loraq. 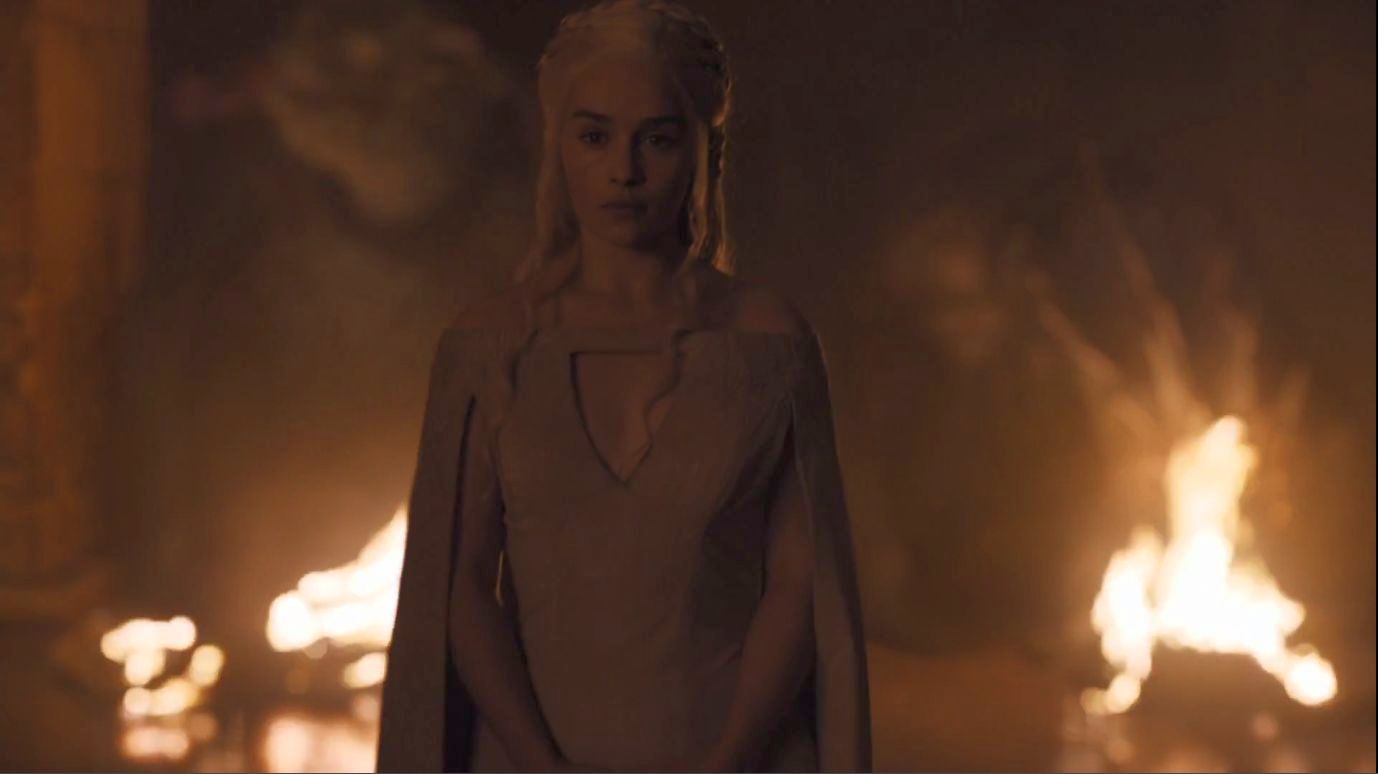 In “Kill the Boy,” Daenerys Targaryen takes her ire out directly on the Great Masters themselves (an ire certainly helped along by the death of Ser Barristan Selmy, a character who is very much still alive in the books and who, in fact, has actually become one of the protagonists of the series), shepherding them into the dungeon where two of her dragons are being held captive, and even allowing one of them to be gobbled up by Viserion and Rhaegal. It’s easy to see how the showrunners would want to present a softer, kinder side of the Mother of Dragons – yes, having a terrified man be burnt alive and torn to pieces is certainly more amenable than even just the threat of slicing the throats of precious children, particularly to a modern television audience – but it also serves as the perfect dramatic bridge to Hizdahr’s fate, going from would-be sacrificial offering to fiancé in the blink of a confused eye. Which takes us to the scene in question itself. The original version has Daenerys sitting at a table in her private residence at the top of the Great Pyramid while Hizdahr zo Loraq attempts to convince her of the utility of the marriage proposal. “Utility” is actually a rather apropos word – while the Meereenese noble speaks eloquently and logically, he doesn’t speak passionately. It’s something Dany notes, even directly to his face:

“You have not said you love me.”

“I will, if it would please Your Radiance.”

“That is not the answer of a man in love.”

“What is love? Desire? No man with all his parts could ever look on you and not desire you, Daenerys. That is not why I would marry you, however. Before you came, Meereen was dying. Our rulers were old men with withered cocks and crones whose puckered cunts were dry as dust. They sat atop their pyramids sipping apricot wine and talking of the glories of the Old Empire whilst the centuries slipped by and the very bricks of the city crumbled all around them. Custom and caution had an iron grip upon us till you awakened us with fire and blood. A new time has come, and new things are possible. Marry me.”

He is not hard to look at, Dany told herself, and he has a king’s tongue. “Kiss me,” she commanded.

He took her hand again, and kissed her fingers.

“Not that way. Kiss me as if I were your wife.”

Hizdahr took her by the shoulders as tenderly as if she were a baby bird. Leaning forward, he pressed his lips to hers. His kiss was light and dry and quick. Dany felt no stirrings.

“Shall I… kiss you again?” he asked when it was over. 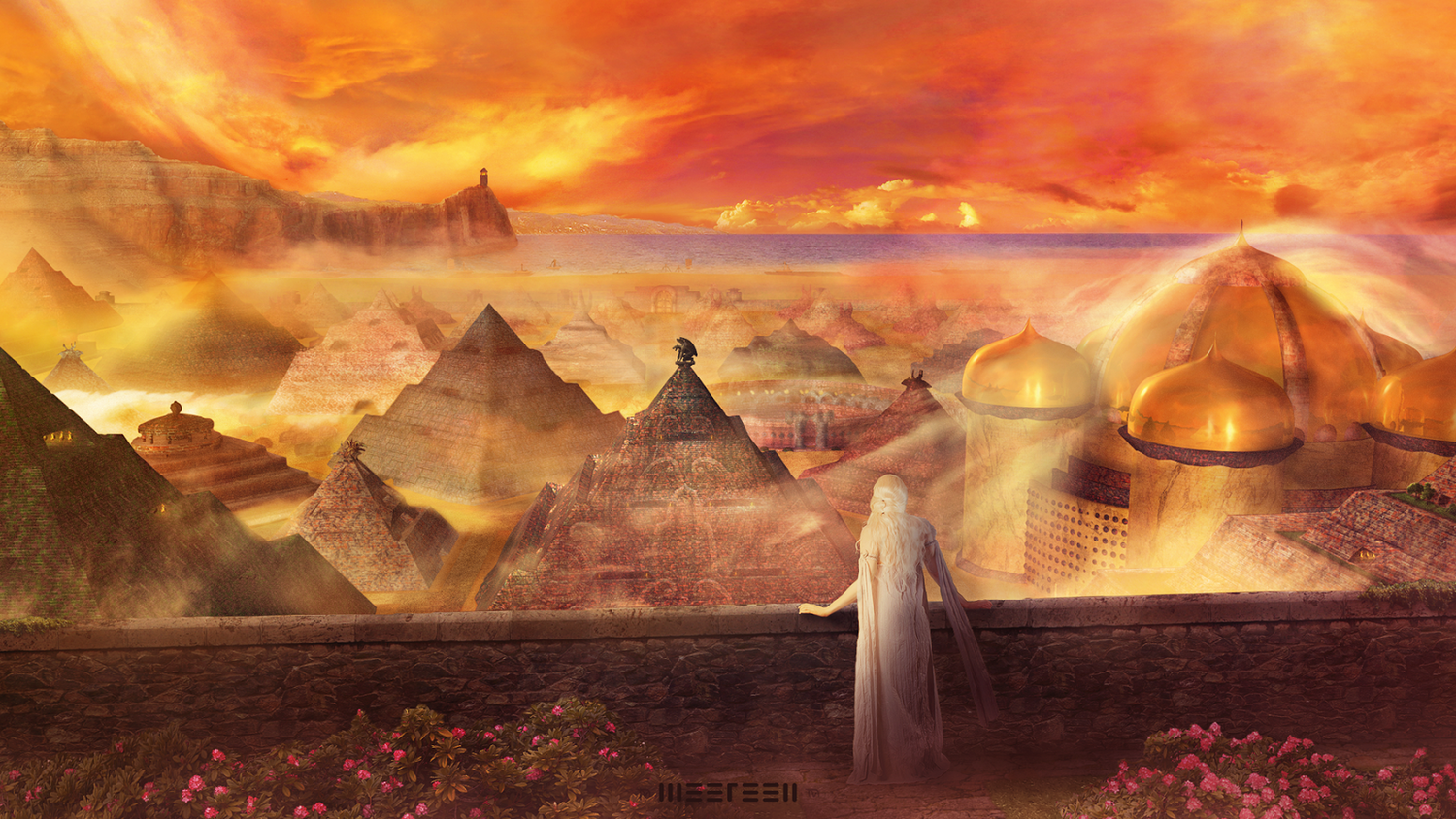 All good leaders must make sacrifices for their subjects, the queen of Meereen surmises, so marrying an individual whom she feels absolutely nothing for would ultimately be perfectly acceptable – so long as the violence can stop. She decides to counter his matter-of-factness with her own utilitarian proposition: should the Sons of the Harpy not strike for the next 90 days, she will marry him. Hizdahr gladly accepts the challenge and walks out, leaving behind only a scowling Barristan the Bold in his wake. Ironically enough, it is Game of Thrones’s Hizdahr zo Loraq who is the more dynamic, pleading with his monarch to spare his life while on his knees and with tears in his eyes (though he still retains a great deal of the rationality that his literary counterpart displays; his comment of “Apparently, I do not want to die at all” is not only remarkably cogent and self-deprecating, it’s also an extremely clever bit of writing, one worthy of George Martin himself). Even the setting is more dramatic – a small cell with burning torches floating in the background and a small bit of harsh natural lighting that only frames the prisoner on his knees. Benioff and Weiss certainly play the scene to its dramatic hilt, replete with his captors leaving behind only an open door to freedom – and an uncertain future.