Though reports initially stated it would begin a day later, it has been confirmed that Game of Thrones will be casting extras for season 6 in Almería July 8th and 9th.

ModExpor International, who handles the show’s extras throughout Spain, posted an announcement today with the casting dates, GoT’s shooting dates this fall, and the very specific requirements for the people hoping to appear on Game of Thrones. 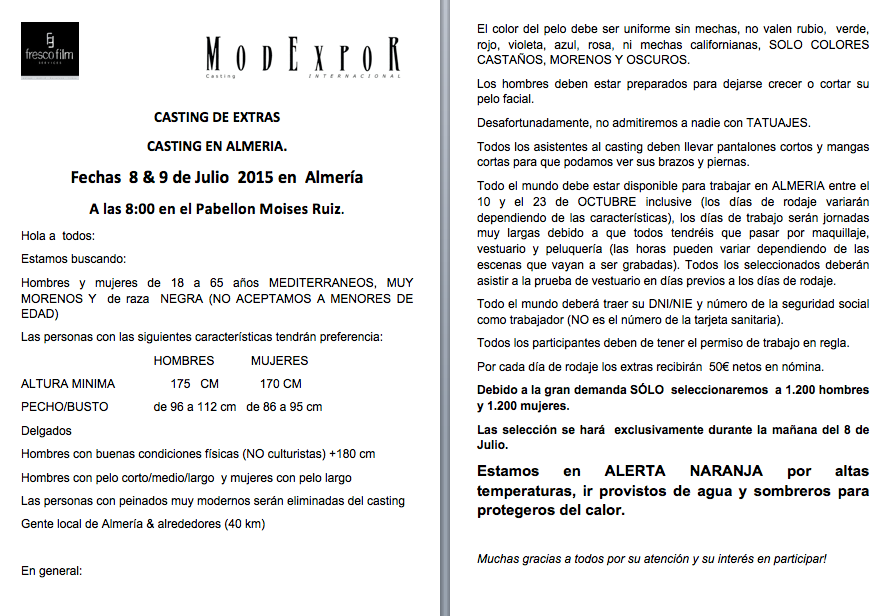 Casting will take place on both days, starting at 8:00AM, at the Pabellon Moises Ruiz in Almería. However, due to the large amount of people clamoring to be extras, the message states they can “select only 1200 men and 1200 women.” The announcement further says that, “the selection will be made exclusively on the morning of July 8.”

Given that the casting is running on both the 8th and 9th, it sounds like 2400 is only the initial screening number. This makes sense, since ModExpor can’t see the several thousand that may show up. The final chosen number of extras may be a lot smaller.

What is Game of Thrones looking for in Almería?

They’re searching for men and women ages 18-65 who are dark Mediterraneans or black. There’s a general height requirement, with ModExpor prefering men at least 175 cm (5’9″) and women at least 170 cm (5’7″).

The notice above also mentions they prefer candidates who are:

Thin
Men in good physical condition (no bodybuilders) 180 cm (5’11”)
Men with short/medium/long hair, women with long hair
People without modern hairstyles
Almería locals preferred
Natural & uniform hair colors required and no blonde, pink, purple, red, green or blue hair- only dark and brown colors.
Men should be prepared to grow out or cut their facial hair.
No tattoos permitted- staff will be checking arms and legs.

Extras will have to be available from October 10th through the 23th. While some of that time might be rehearsal, it’s safe to assume most of that will be shooting (and of course the usual prep time including hair & makeup).

With this new info, the fall location schedule is coming together. Game of Thrones is in:

It is still unknown what storyline exactly Game of Thrones is filming in Almería, though rumors have been flying for a while now. The extras casting may throw a kink in some of those theories, as these requirements are so strict. Dothraki, Dorne, Essos at large and of course scenes that don’t require extras are still on the table. What do you think, readers?